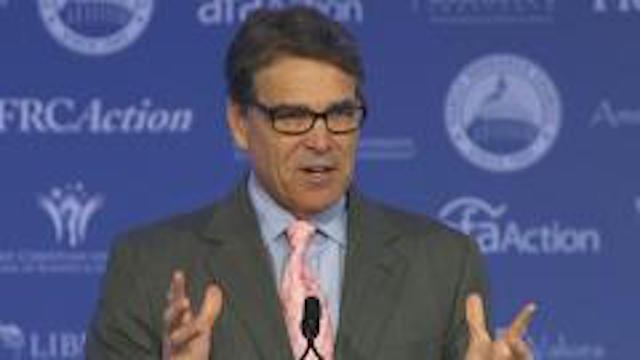 Speaking as a non-presidential candidate, Perry called on all conservatives to stand by a candidate that wouldn’t divide the party. Without mentioning names, Perry renewed the rivalry against the Republican front-runner Donald Trump. During his brief run, Perry would try to take on Trump, but that led to his poll numbers dropping, which ultimately led to Perry being the very first candidate to bow out the race earlier this month.

“We see in our politics today a lot of agitation, but I want to issue a word of caution,” Perry said to the 2,500 social conservative attendees on Friday.  “There is a difference between righteous indignation and unconstrained anger. We cannot make the mistake the replacing a liberal divider-in-chief with a conservative divider-in-chief or to sacrifice our principles for the cult of personality.”

On the issue of immigration, Perry resurrected Trump’s anti-immigration rhetoric, an issue that has put Trump in the spotlight and leading the polls. “We can secure the border and reform our immigration system without inflammatory rhetoric, without base appeals to divide us,” Perry said. Reminding the crowd of his 14-year tenure as governor of Texas, Perry noted how his state borders Mexico and he secured the border when President Obama refused to do so. The real estate mogul began his campaign by talking heavily about the immigration problem and how Mexico sends murderers and rapists across the border. This helped Trump gain momentum throughout the summer, which resulted in huge support and leading the polls in the first of the nation states as well as nationally.

“Demeaning people of Hispanic heritage is not just ignorant, it betrays the example of Christ,” Perry said. “It’s time to elevate this debate from divisive name-calling, from sound bites without solutions, and start discussing how can we make this country better for all of us with real conservative values put into place.”

Perry closed his speech with another jab at Trump, but this time taking his slogan of ‘Make America Great Again.’ “Let’s make America good again so it can be great again,” Perry said, receiving a standing ovation from the audience.

Movie Review: "90 Minutes In Heaven" (Three out of Five Stars)