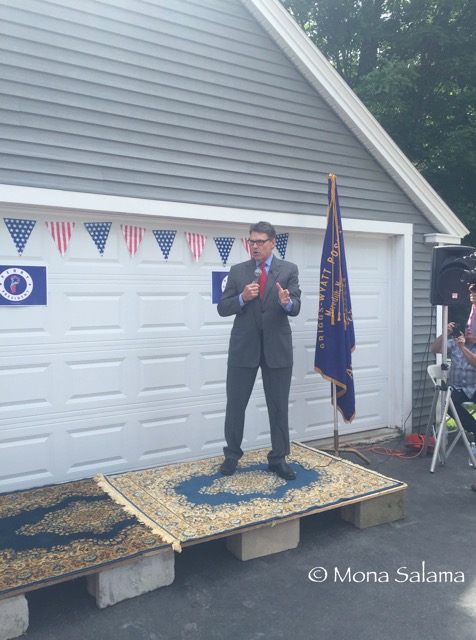 Just days before the second Presidential debate hosted by CNN, former Texas Governor Rick Perry became the first Republican in a crowded field of 17 candidates to end his bid for the White House.

“We have a tremendous field of candidates — probably the greatest group of men and women,” Perry said in a speech at the Eagle Forum conference in St. Louis, Missouri. “And as long as we listen to the grassroots, the cause of conservatism will be, too.”

Perry’s early exit, just 99 days after his second consecutive run for the presidency, failed to gain momentum and funding over the summer. By August, Perry had stopped paying campaign staff in early primary states. His operation team in New Hampshire folded and his key advisers left his Iowa team. As his campaign was crumbling, his ‘Opportunity and Freedom’ Super PAC was still strong, raising $17 million and declaring they were “in it for the long haul.” However, the rumors about Perry being the first to drop out soon became reality when Perry alerted donors on Thursday that he was planning to end his bid.

“I share this news with no regrets,” Perry said. “It has been a privilege and an honor to travel this country, to speak with the American people about their hopes and dreams, to see a sense of optimism prevalent despite a season of cynical politics. And as I approach the next chapter in life, I do so with the love of my life by my side, Anita Perry. We have our house in the country; we have two beautiful children and two adorable grandchildren, four dogs, and the best sunset from our front porch that you could ever imagine. Life is good. And I am a blessed man.”

The most media coverage Perry received during the summer was mostly over his fierce attack on Donald Trump when Trump said John McCain was not a war hero.  His criticism of Trump didn’t help boost his poll numbers, causing him to narrowly miss the last spot of the first main stage debut in August. After the debate, while others rose in the polls Perry continued to stumble and on Thursday CNN released the lineup for the September 16 debate, which scheduled Perry to once again appear at the preliminary forum before the main stage debate.

During his speech, Perry didn’t mention any specific candidate by name but one of his warnings to Republican contenders was clearly directed at Trump. “First, the answer to a president nominated for soaring rhetoric and no record is not to nominate a candidate whose rhetoric speaks louder than his record,” Perry said, warning conservatives against “falling for the cult of personality.” He continued, “My second warning is this: we cannot indulge nativist appeals that divide the nation further. The answer to our current divider-in-chief is not to elect a Republican divider-in-chief.”

After Perry announcement of suspending his campaign, Sen. Ted Cruz announced that he and his wife were donating money towards Perry’s charity:

Other GOP presidential candidates tweeted wishes and salutes on Twitter:

.@GovernorPerry is a terrific guy and I wish him well- I know he will have a great future!

The entire GOP field was unquestionably made stronger by the experience & wisdom @GovernorPerry brought to the race https://t.co/IR5amYIHv7 — Ted Cruz (@tedcruz) September 12, 2015

.@GovernorPerry, you championed the kind of real results we need to deliver in Washington & for America. Thanks for running a great race -SW

@GovernorPerry getting to know you and Anita has been a great joy for our family. Thank you for your service friend. pic.twitter.com/DGom5sEgSP

.@GovernorPerry is a great friend, and has the best record of any Governor anywhere, anytime. — Gov. Bobby Jindal (@BobbyJindal) September 11, 2015

Senator Rand Paul had other wishes for Governor Perry

I welcome supporters of Governor Perry to join our campaign for liberty. Our nation needs a leader in chief: http://t.co/lpzLQBXXC5

What does it say about GOP when a 3 & half term Gov w/ a successful record of creating jobs bows out as a reality star leads in the polls? — Dr. Rand Paul (@RandPaul) September 11, 2015