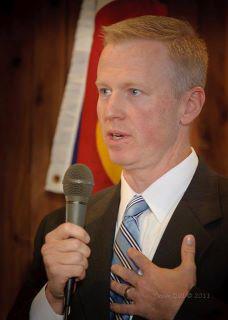 The Colorado Republican field of U.S. Senatorial candidates vying for the party’s nomination to unseat incumbent Michael Bennett may grow larger with the possible addition of District Attorney George Brauchler.

Five individuals declared their candidacy so far, but no high profile candidates have emerged. Brauchler received notoriety from the massive media attention as the prosecuting attorney in the Aurora theater shooting case.

When asked about his political ideology in an interview with Politico, Brauchler said, “I feel like I’m a conservative.”

Brauchler’s name has been tossed around as early as January when Roll Call cited him as a possible challenger: “Republicans describe him as smart, articulate and ambitious, but several GOP operatives said he might prefer to run for governor instead in 2018.”

Colorado’s Republican Senator Cory Gardner expressed enthusiasm on the potential Brauchler candidacy. He told Politico, “I think if he ran for the Senate, he’d be someone who a lot of Republicans could get behind — including myself,”

Gardner, once considered a “tea party hero,” ran for the U.S. Senate in 2016 positioned as a conservative—and has since trended liberal in his voting record.

A September 1, 2015 analysis of the Conservative Review’s Senate scorecard showed Gardner earned an “F” with a 20% rating. In comparison, the self-avowed socialist Bernie Sanders seeking the Democratic Party’s nomination for president received a 16% rating.

Now that Brauchler admitted to feeling like a conservative, the real question is if he would vote like one—or would he instead join Gardner and Sanders in their liberal, progressive voting patterns?

CO GOP Activist Re. Canceling the Straw Poll: You Made the Right Decision, Now Own It

Anni Cyrus: The Day I Was Called a Woman by Islam At Age 9