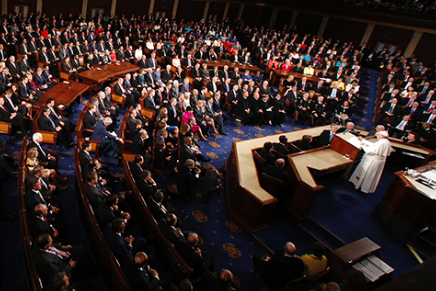 With all of the hype surrounding the Pope’s address to Congress, I can’t help but wonder one thing: why is no one outraged that the world’s most prominent religious figure is giving a speech to Congress?

Why is no one in an uproar over this? My guess is that a large portion of the Beltway are Catholics. Because they’re Catholic, they’re mystified by the Pope. They’re blinded by their religion’s high regard for the Pope. Their blindness is dangerous.

Some will say the Pope’s address to Congress isn’t political, yet we heard him bring up policy points, like climate change and the Syrian refugee crisis. He abused his power as a religious figure to influence American politics. Liberals aren’t complaining about it because, for the most part, what he said favors their agenda. Conservatives on the other hand, are afraid to criticize the Pope because it would look as though they don’t support religious freedom, a huge platform of the Republican Party.

It’s simple, really. If the Pope wants to call upon Congress to make particular policy decisions, he should do it the traditional way, via the media and a press conference.

(Note from Editor:  Muslim clerics have opened with prayer before Congress several times, including 2010 and November 2014.)