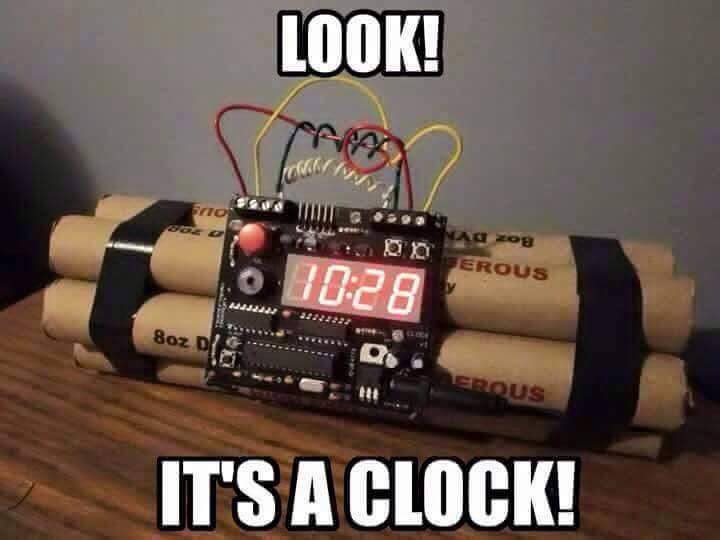 If you want a glimpse into the way the Democrat Party operates, look no further than social media comments on any national story they want to bury.

The same people cheerleading for Obama’s ‘See Something, Say Something’ campaign are now backtracking, saying, ‘Wait, not so fast! Don’t report everything you’re suspicious of!  Just because a teenage Muslim is carrying a metallic suitcase with wires coming out it you have no reason to be suspicious–and how dare you be!”

Throughout the past 6+ years we’ve seen kids as young as elementary age get suspended for even pretending to have a gun (see ‘the Pop Tart incident’). Anti-gun nuts are constantly in a frenzy to ban everything that makes a loud noise. But now, when a Muslim kid is suspected of bringing a bomb to school, they’re all suddenly defending him.  Not only defending, rewarding him.

Barack Obama tweeted him an invite to the White House. 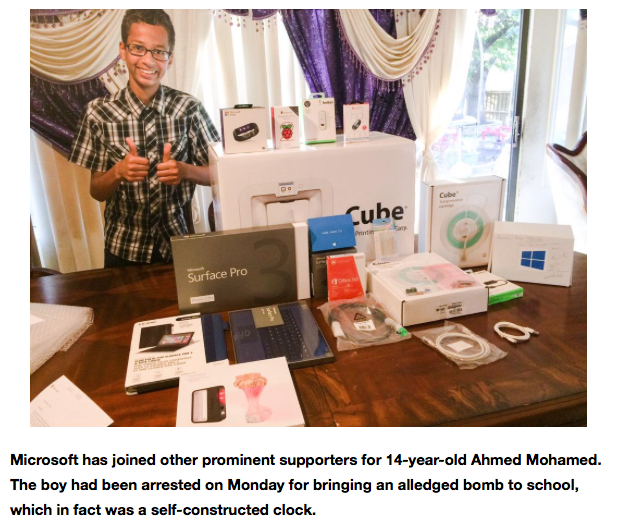 When anything this outrageous takes place, one has to assume there are darker, deeper, more nefarious underpinnings and that is definitely the case with this story.  For example, how did this ‘random’ event in a Texas school garner so much instant media attention, including tweets from major Democrat politicians?  What’s so special about Ahmed Mohamed’s hometown, Irving, Texas?  According to Center for Security Policy Director Frank Gaffney, the real story about this “innocent clockmaker” is much more involved than the media wants you to know.

From Gaffney’s article on Breitbart:

[Irving, Texas] Mayor Van Duyne has been a prime target of the Muslim grievance industry in Texas – a fixture of the Islamists’ large and aggressive operations in the state and elsewhere – ever since last spring when she opposed the establishment of an Islamic tribunal in her city. She did so out of a legitimate concern that such an entity would serve as its counterparts have elsewhere, notably in Britain – namely, as a vehicle for dispensing “justice” as defined, not by the laws of the land, but in accordance with the Islamic supremacist code called shariah.

Another data point: Attacks on Ms. Van Duyne in connection with the Ahmed Mohamed affair appear to have been pre-arranged and synchronized, rather than the sort of reaction that builds over time. Her Facebook and Twitter accounts, and those of the city government and school district, were suddenly and massively assaulted with vehement denunciations of the treatment of this student. Some were so vile, obscene and threatening that the Mayor has been compelled to accept police protection.

It is impossible to say for certain at this point whether the campaign to smear, silence and politically destroy Mayor Beth Van Duyne – a campaign pursued for months by the Islamists and greatly enabled by the Dallas Morning News and others – was actually a premeditated and skillfully executed provocation and influence operation. What is clear, however, is that in the aftermath of the predictable response to Ahmed’s actions, it has turned into an extraordinarily successful campaign of disinformation and political warfare against an American community and its courageous and honorable mayor, the Irving school district and local law enforcement.

Either way, this larger campaign must be recognized for what it certainly is, and repudiated, not applauded – not only by protective parents of school-age children, but by patriotic Americans across the country who are opposed to Islamic supremacism and the threat it poses to us all.

This week after posting an article entitled, Father of Teen That Made Clock Mistaken for Bomb is Qur’an Activist on Facebook, a barrage of Democrat activists immediately swooped down.  Here are some of their actual posts to help you understand the way the Democrat Party has been instructed to combat this story. (Note: The grammar/spelling mistakes are their own…)

Democrat Talking Point #1:  It Didn’t Even Look Like a Bomb! You’re All Islamophobes!

‪Calli Cleary‪ It wasn’t a suitcase it was a pencil box and it had an electrical plug coming out of it. How many bombs have you seen designed like this?  It wasn’t a “suitcase” bomb. It was in a Vaultz pencil box

‪Leonard Greer Just because you are ignorant of the technology you live with everyday does not justify paranoia nor does it mean others are so ignorant. By all accounts his teacher knew as well as the authorities (they did not evacuate or call bomb squad); they choose to punish the guy because he was Muslim, probably because they were embarrassed. At their ignorance.

‪Leonard Greer So perhaps at least now you can understand the extreme feelings of mistrust many of us have about guns (the Garland thing was guns, not bomb) on private citizens! At least we KNOW they are lethal!

‪Usama Zafar 1. Who started the 1st world war? Was it Muslims?

‪2. Who started the 2nd world war? Was it Muslims?

‪3. Who killed about 20 million of Aborigines in Australia? Was it Muslims?

‪4. Who sent the nuclear bombs to Hiroshima & Nagasaki? Was it Muslims?

‪5. Who killed more than 100 million Indians in North America? Was it Muslims?

‪6. Who killed more than 50 million Indians in South America? Was it Muslims?

‪7. Who took about 180 millions of African people as slaves, of whom 880/0 died and were thrown in the Atlantic Ocean? Was it Muslims?

‪No, they weren’t Muslims! First, u have to define terrorism properly. If a non-Muslim does something bad, it is a crime. But if a Muslim commits the same act, he is a terrorist.

‪First remove this double standard, then come to the point!

‪Mohammad Asad You must be watching FOX NEWS a LOT, and I’m sure they never show the MILLIONS of INNOCENT people who have died in Iraq, and Afghanistan thanks to America and from the spread of what they created in Iraq it has now reached Syria and Lebanon. If I am terrorist for being Muslim, what are you for killing Millions of people?

‪Vaso Radinovic Ignore em Usama. They just fanatics lol . When they want get real facts n finish education then they can state their facts . before that. Y’all just islamophobic

So now that you understand their Alinsky-esque rules, here’s a recap:

Oh–and if you happen to see a few suspicious-looking young Muslims carrying an actual bomb they’re calling a “backpack” at, say, a marathon? According to these new terrorist rules, you should See Nothing/Say Nothing.

And pray to God you are wrong.

Victory in Oklahoma For Vaccine Choice and Defeat for Sleazy Politics

Scott Walker Becomes Second Candidate to Call It Quits for 2016