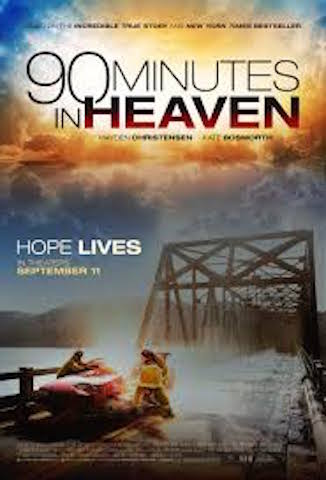 Struck head on by a truck, Don Piper (actor Hayden Christensen) is declared dead and lies inside his battered vehicle for 90 minutes until a minister who is passing by decides to enter the vehicle and pray for him. Suddenly Don begins to respond as the amazed minister informs the emergency crew of Don’s response and he is immediately rushed to the hospital. In those 90 minutes that Don lays unresponsive, he sees himself peacefully in heaven visited by deceased family members and friends until awakening in horrific pain.

The story follows Don through his recovery and his questioning God about why he was brought back from heaven to feel such emotional and physical pain. His wife (actress Kate Bosworth) and family, unaware of his vision of heaven, are confused by Don’s despondent and angry reaction to them as Don tries to come to terms with his faith and understanding why he was brought back.

Although the book conveys the intensity of Don’s visit to heaven, the film does not and therefore the viewer is left feeling frustrated by his reaction to family and friends trying to help him recover. Perhaps since the time the book was written, we have seen in television and film so many stories of miraculous life and death events, that Don’s vision seemed somewhat lackluster in comparison in this film. However, at the end of Don’s story, we see the real Don Piper speak and only then have a glimpse of the extraordinary event of his life.

Hayden Christensen and Kate Bosworth are adequate as Don and Eva Piper, but supporting players, Dwight Yoakum (Lawyer Beaumont), Michael W. Smith (who also wrote the music) as Cliff McArdie and Fred Dalton Thompson (Jay B. Perkins) are outstanding in their roles as well as an excellent performance by actress Deena Beasley (Don’s nurse) who role was small but stood out as one of the best.

Why Washington Outsiders are Polling Well This Election Season