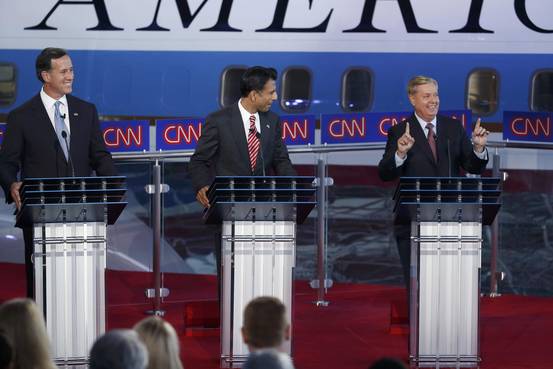 Four Republican presidential candidates whose poll numbers were under 1 percent were given a chance to debate for two hours in a “happy-hour” warm-up act before the main event at the Ronald Reagan Library in Simi Valley, California.

Former Senator Rick Santorum, Senator Lindsey Graham, Governor Bobby Jindal and former Governor George Pataki took the stage vying to maintain their campaign viability in this crowded Republican field. For these four candidates, there is much at stake – trying to bring their poll numbers up to keep their campaign off life support. With the small number of candidates debating, it allowed for each candidate to have plenty of back-and-forth exchanges.

The beginning of the debate focused on questions of a specific candidate who weren’t sharing the stage with them. CNN moderator Jake Tapper questioned all four candidates on Donald Trump’s dominance of the polls throughout the summer. When asked if Trump broke the Reagan 11th Commandment of thou shall not attack another fellow Republican, Governor Bobby Jindal responded, “I’m in compliance with the 11th Commandment, and I would tell my fellow Republicans, let’s stop treating Donald Trump like a Republican.”

Senator Rick Santorum was asked what he thought of Jindal’s response of his attack of Trump but Santorum didn’t take the bait and instead defended Trump:  “I think personal attacks, just please one person, Hillary Clinton… Donald Trump has every right to run for president as a Republican, as anybody else in this audience.”

Determined, Tapper continued his mission of finding another candidate who would criticize Trump. His next question was to Senator Lindsey Graham.  Referencing the fact that Trump leads Graham in his home state of South Carolina, Tapper asked about a previous comment in which Graham called Trump a “wrecking ball”.  Graham said, “Well, all I can say, if you looked at polling in 2012 and 2008 at this level, we’d have — at this stage, we would have President Perry and President Giuliani. I have an long way to go.”

“I have not broken the pledge because Donald Trump is not going to be the Republican nominee, period, flat out, I guarantee you that… Donald Trump is unfit to be president of the United States or the Republican Party’s nominee. This is an important election with an enormous number of challenges facing the American people. And the first four questions are about Donald Trump.”

After 30 minutes of more TrumpMania questions from the moderators, they finally ask the four candidates policy issues ranging from boots on the ground, immigration, and religious freedom. Between two moderate Republicans, Graham and Pataki, and two social conservatives, Jindal and Santorum, their differences on issues led to sharp disagreements.

On immigration, there was a heated exchange between Graham and Santorum with Graham supporting a path to legal citizenship, and Santorum supporting the deportation of 11 million illegal immigrants. Graham said Santorum “didn’t have an immigration plan” in the Senate.  Santorum attacked back, “I did have a plan back in 2006. I introduced a plan called, A Comprehensive Border Security Bill…” Graham provoked Santorum by asking, “How many Democrats did you have on your bill?” Santorum replied, “It went nowhere, because we had a president back then who was for more comprehensive immigration reform.”

The subject of Kim Davis caused candidates to turn on each other, arguing about whether or not people have the right to put faith over a job.

Pataki said, “An elected official can’t say I’m not going to follow that law if it conflicts with my beliefs. I think she should have been fired and if she worked for me, I would have fired her. We have to uphold the rule of law.” Santorum strongly saying, “Someone who refuses to defy a judge’s unconstitutional verdict is ridiculed and criticized, chastised because she’s standing up and denying — not denying her God and her faith.”

With minutes after the debate ended, news outlets called Graham the winner, praising him for his performance and tone. Some said it was the “vintage Graham”, stating his performance might help bring his polls numbers up enough to be on the main stage at the next GOP debate in October.

The “[Fill in the Blank] Lives Matter” Divide