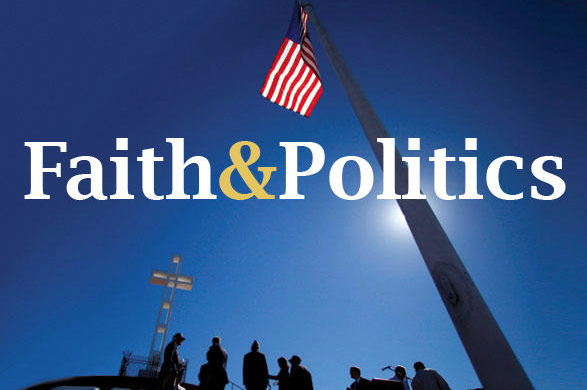 If religion is so important in an election, how do we determine if people are truly as committed to God as they say?  As the election of 2016 progresses, religion, scripture and hypothetical circumstances of a candidate’s belief are on the rise.  Candidates mention their campaign contemplations during Sunday morning worship services, while other candidates send emails to potential supporters using biblical scriptures to support their points of view. Then there is Donald Trump, whose expression of his religious commitments leaves him describing communion as “…my little wine…my little cracker”. Trump deserves credit for not trying to sound like a weekly attender of worship services or even one who openly doesn’t feel the need to “ask God for forgiveness. In a world where statements are made usually to cater to the moment, an honest answer is refreshing, even if it doesn’t always please your audience.

Aside from Trump’s sometimes astounding honesty, are other candidates’ spiritual feelings truly from their hearts or are they a type of spiritual pandering to the religious electorate?  Should it truly matter?  Is there enough of the voting community who themselves have a relationship with God, to really make a big deal about religion in the life of our President?

Ben Carson certainly opened a can of “Why did I say that?” in a recent television interview with Meet the Press.  But truly, how bad was the can he opened?  How destructive were his comments, really?

Mr. Carson deserves a lot of credit for the sincerity in his belief.  Frankly, Mr. Carson consistently expresses a commitment to God, in the presentation of himself. Rather than using scripture or biblical references as speech fillers or campaign slogans, his belief in God’s deity and influence in his life, is intertwined in his normal patterns of speech. When someone is truly committed to their spiritual belief, whatever it may be, it shows in their pattern of behavior and speaking. A spiritual conviction, one of everyday reflection and a striving for continual growth in a person’s life, will not be hidden.

However, when political candidates pander to Christians by seasoning their soundbites and conversation with a dutiful scripture or relational comment about God, is sometimes worse than just being honest about your belief.  If you are an atheist, say it.  If you only see the need to attend church services on Easter and Christmas, say it.  A candidate should not allow their speech writers to pull scriptures out of the Bible, many times misused or out of context, to make Christians believe they are “one of us”.  Candidates should be themselves in all instances, especially when they present their spiritual beliefs and opinions, even with social issues which have ties to a biblical morality.

Article VI of the U.S. Constitution has come into the forefront of our conversations based on the Meet the Press question to Ben Carson, regarding Muslims and the presidency. The last paragraph of the Article states those holding specific offices, both federally and at the state level, “shall be bound by oath or affirmation, to support this Constitution”; however, “no religious test shall ever be required as a qualification”. When Mr. Carson gave his answer to Meet the Press, he also discussed a believer in the Muslim faith needing to uphold the U.S. Constitution, over the individual’s ‘religious constitution’ or what their faith deemed a higher law to live out in life.  Anyone’s fear would be someone campaigning on the platform that the U.S. Constitution was sovereign and then evolving or changing their attitude once being elected. Great concern would be raised, if their change was toward Sharia Law or something of that manner. Fox News Contributor David Webb surveyed Muslims in New York City regarding the question of Sharia Law and the Constitution. Some Muslims believed the Constitution or any country’s law was over Sharia Law, yet others believed the opposite.

This is where the sincerity of someone’s religious beliefs is desired to be known by the electorate. Any spiritual belief, whether attached to God, another religious head, or from a strictly humanist view, should be honestly revealed by the candidate. Knowledge of how radical sects of religions can likely influence an individual, causing a religious evolution in one’s belief system is necessary.  If a sitting president can “evolve” in their belief on a social issue, they most certainly can have a transformation in a religious belief. President Obama was influenced by advocates and emerged with a new found insight on a topic, so could someone who has a Sharia Law influence, which collides with the Constitution.

Sometimes in a push to be the world’s guidepost of ultimate acceptance, Americans may exuberantly accept a candidate for the highest position in the country, without truly vetting and investigating their depth of commitment to a potentially radical sect of their religion, such as with the Muslim faith. In doing this, we will run a risk of putting our way of life in jeopardy.  Ben Carson had the courage, whether polished or not in his wording, to bring this concern to the front of the conversation.  If the liberal media is going to play the “gotcha” question game, the unwilling participant of the game must always answer honestly.

Constituents rarely hear the “uncensored”, from the heart religious convictions from politicians.  Christian politicians have to be so deliberate in their spiritual wording, that honestly, it is difficult to know if someone really has a spiritual commitment or not. It takes courage to speak genuinely publicly of the convictions in our hearts.  The fear of retribution from all sides causes people to run and hide.  When someone actually shares their true feelings and they are called upon to defend their words, it ends up turning into a mess of retractions and watered down beliefs.

This is a time for all political candidates to truly share their spiritual beliefs. Not as a litmus test to hold office, but as an indicator of their direction in life. If someone holds a truly sincere belief, it should be expressed publicly. The rigors of a job such as the President of the United States, will find a way to bring out the truth eventually. It is best to openly express spiritual beliefs in the beginning. Liberals will try to silence conservatives who possess strong spiritual beliefs.  It is fear of the unknown or fears that they themselves might be convicted by the truth. Truth will always win and candidates should be courageous to speak the truth about their religious beliefs.