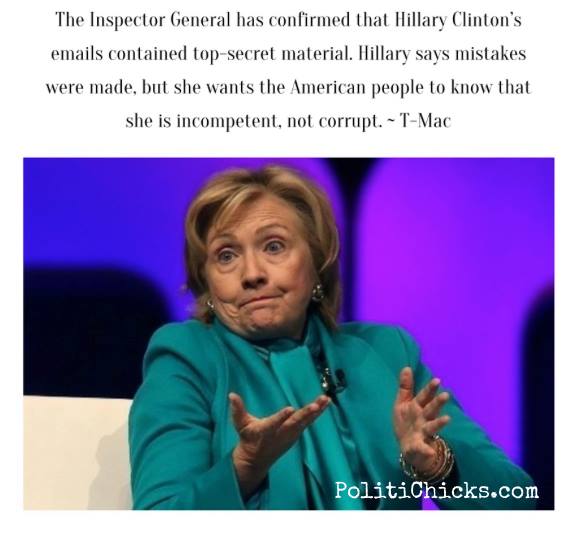 History continues to be made by the lying, cheating, fraudulent Left.  While the 21st century ushered in the first black, communist-leaning President, we are now hopefully only a few emails away from His and Hers perjury charges for former President Bill Clinton and his First Lady, the infamous Hillary.

What is it about the name ‘Clinton’ that just wreaks of words like slimy, arrogant, deserving, thief, criminal, and tacky?  Many of us remember that cold December day in 1998, watching the impeached President Clinton testify under oath and looking a most uncomfortable shade of pale as he pointed his finger at the television screen and admonished Americans at large saying, “I did not have sexual relations with that woman!”

As it turns out, yes, he did, and the definition of ‘sexual relations’ will forever be the most iconic remembrance of Billy Boy’s presidency.  That and the words “blue dress” (which I’m pretty sure is not what a President wants to be remembered for in future American History books…)

And now, Bill’s wife is under criminal investigation by the FBI. They are looking into her position as Secretary of State and the extent of her knowledge surrounding the Benghazi attacks and Libya during the deadly summer and fall of 2012. Nearly three years of stalling, deflecting, and deferring have passed and finally Federal Judge Emmet Sullivan is forcing Hillary Clinton to come clean.

Throughout the summer of 2012 there was escalating violence in Benghazi and the surrounding area. It began with an attack on the international Red Cross station that involved direct threats to the United States and prompted a request to the Secretary of State Clinton for added protection. But no extra manpower was sent and the request was ignored.

On June 6, 2012 an explosion was detonated outside the American consulate that ripped a 12 foot hole in the wall around the compound. Five days later a rocket-propelled grenade launcher sent heavy fire that hit the convoy of the British Ambassador and wounded his body guard.

On July 9, 2012 U.S. Ambassador Stevens sent a cable to Clinton’s State Department asking for a minimum of 13 security personnel to protect the United States embassy in Tripoli and Benghazi because of extremely heightened threats and growing bloodshed.  Again, he was denied.

Then on September 11, 2012 there was a violent and explosive invasion on the American post in Benghazi that killed Ambassador Chris Stevens and U.S. Foreign Service Information Officer Sean Smith. A couple hours later that same night a subsequent attack took place on another compound one mile down the road and captured the lives of ex-Navy SEALS Tyrone Woods, and Glen Doherty.

Even the good Libyan citizens were outraged, telling journalists how they appreciated the Ambassador’s helpfulness towards their cause of being free.

Following the deadly onslaught of governmental American employees on foreign soil, Congressional House Oversights and Government reform called a special committee overheard by Representative Trey Gowdy to order and ascertain the truth of all involved at the States level in Washington DC. During the questioning phase of that internal inquiry Lt. Colonel Andrew Wood and others testified before Congress in October of 2012 and affirmed the aforementioned sequence of events at the US compounds in Libya.

When it was Secretary Clinton’s turn to testify her answers were vague and non-assuming at best. Her staff refused to turn over any and all correspondence regarding unrest and surging forces in Libya. Her staff begrudgingly released emails with large gaps of time unaccounted for. At this point it was publicly denounced that Secretary Clinton was not following the rules and using a personal and private email server for her governmental correspondence.

“The State Department transferred 300 messages exclusively reviewed and released by her [Clinton’s] own lawyers,” Gowdy added in a May 22 statement, noting gaps in the email records. “To assume a self-selected public record is complete, when no one with a duty or responsibility to the public had the ability to take part in the selection, requires a leap in logic no impartial reviewer should be required to make and strains credibility.”

As Twitchy reported, right on cue, Hillary Clinton turned on the waterworks this morning during her testimony on Benghazi. But when questioned by Sen. Ron Johnson on the motives behind the murders of four Americans, she lost control of her carefully crafted emotions. Forced into the spotlight, Hillary lashed out, yelling “At this point, what difference does it make?”

The charge on the American compound did not happen out of the blue. There is a clear and traceable timeline of the building aggression in Benghazi and the fact that no one was held responsible left a lingering fear for those who protect us and gave strength to those who work to do us harm.

By ignoring the calls for help in Benghazi, Hillary Clinton sent a disturbing message to our military that they will not be protected. That is what difference it makes.

In 2013, the Associated Press filed a Freedom of Information Act request to see the records as to how and why Mrs. Clinton’s personal aide Huma Abedin received special access status. This request caused Clinton a double-fold problem with her email server. As the months and years have sauntered by with no truth coming to light about Benghazi, District Court Judge Emmet Sullivan ordered the State Department to keep in close touch with the FBI about what investigators find on Hillary Clinton’s e-mail server. And the judge indicated he thought her decision to conduct official business on a private e-mail account was unwise. “We wouldn’t be here today if the employee had followed government policy,” said District Court Judge Emmet Sullivan, referring to the former Secretary of State.  Judge Sullivan added,

Some political pundits are saying they smell a modern-day Watergate.  From conservative writer Jeffrey Lord:

After waiting 8 years, President Clinton’s partner in crime, Hillary, has thrown her hat back into the Presidential ring. Despite all of the new bones in Hillary’s closet–not to mention the blood on her hands and dirt under her nails–it is unconscionable that she would ever attempt to run for any office, but she is.  Bill probably already has his bags packed and waiting in the hall for “White House Moving Day” in January 2017, but he may want to slow it on down because any way you want to spin this story or dice and splice the facts, Hillary Clinton is either a criminal or incompetent, or perhaps both. It will be interesting indeed to see if Clinton once again walks away unscathed, or if her wake of death and destruction will, finally, catch up with her.  Hopefully this time around, Judge Reggie B. Johnson will have a mighty big piece of Humble Pie waiting for both Bill and Hillary.

Regardless of the outcome of the FBI investigation, President Clinton and Hillary can order matching monogrammed bath towels. HIS can read ‘I Lie Under Oath ‘and HERS can read, ‘I Do Too’.