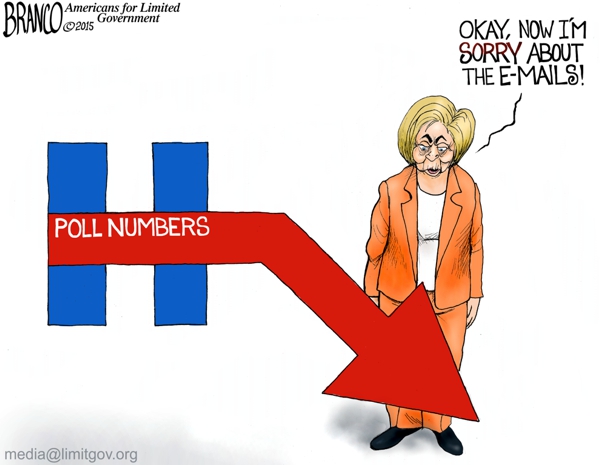 Over Labor Day weekend, Hillary Clinton gave an on-camera interview with MSNBC’s Andrea Mitchell in which they had this exchange:

ANDREA MITCHELL: Are you sorry? Do you want to apologize to the American people for the choice you made?

HILLARY CLINTON: Well, it wasn’t the best choice. And I certainly have said that. I will continue to say that. As I’ve also said many times, it was allowed. And it was fully above board.

It was later during the interview when Clinton made a back-hand attempt at apology:

HILLARY CLINTON: “At the end of the day, I am sorry that this has been confusing to people and has raised a lot of questions, but there are answers to all these questions. And I take responsibility and it wasn’t the best choice.”

As John Wayne said in Rio Bravo, “Sorry don’t get it done, Dude.” An apology for her choice of using not just a private domain but on on a server installed in Manhattan for use of the Clinton Family Foundation instead of the required government secure and encrypted server? That’s like saying sorry I lost the Nuclear Football, Andrea. What kind of thinking, what reporter comes up with that as a serious question regarding a serious issue?

Then we look at the responses Clinton gives to it. The oft-repeated, oh yes Hillary, you have said over and over and over again,” it wasn’t the best choice.” But I beg to differ on the contention that it was allowed. We have heard the adage “Tell a lie long enough it becomes true” but unfortunately for Hillary Clinton, this is not the case. She says she is sorry for confusing people, let me help this candidate for President of The United States in making things very clear, untangle the web of lies, obfuscations, evasions, political spin being applied to the situation.

First off, no it was not allowed, ‘it’ being the use of private mail account(s) for public/government work, most especially that of the State Department where sensitive/classified material is received and sent, and where information from foreign governments is in constant flow. According to Senator Chuck Grassley (R-Iowa) her use of private email account violates the regulations under the National Archives and Records Administration, if not violation of Federal law.

This brings me to my second point: Discovery of not one but two non-secure, non-encrypted servers being used for transmission, receipt, and storage of Clinton’s work product. As I wrote previously, she would have us believe that in her entire four years as Secretary of State, she never once had any classified material sent to her, let alone forwarded or stored on the server. Not possible, especially now we know that investigators have determined hundreds of the emails she turned over to State at the end of her term did in fact contain classified material.

Shall be fined under this title or imprisoned not more than ten years, or both.

To begin with. I would have you remove any idea that Clinton or any one, likely several, of her aides dealt unknowingly with classified information. She and they will attempt that gambit assuming it to succeed because most Americans have no clue as to how classified material is handled, who may classify or declassify, what the designation of need to know is, or that in fact, all classified material has a record of the chain of custody. Ever since the Bradley Manning incident, a serious and dedicated effort has gone into making certain security has not been breached, that one person is incapable of “borrowing” another’s security pass and then proceeds to download reams of classified, sensitive material to do whatever he chooses with it. The Secretary of State could not have received classified information that she “mistook” to be unclassified, either herself or one of her aides; this is impossible. During her four years she quite likely received information that is designated born classified, meaning it was classified at the source.

As Secretary of State, Clinton herself was one of only twenty members of the Administration with the authorization to classify material. Her aides, however, were not, nor would they have had any need to know the contents of classified material. Having a Top Secret clearance is not enough in this area; this is why her chief of staff Cheryl Mills and her personal assistant Huma Abedin are both under investigation themselves.

“And it was fully above board.” Nonsense. Above board means out in the clear, fully exposed for all to see. Clinton claims “everyone knew” she used a private, not a dot-gov, email account. However, when Assistant to the President Valerie Jarrett was asked back in March, she was quite emphatic about how she’d had no idea. Then there is the former chairman of the House Oversight Committee who had be seeking from the State Department all the email transmissions of Hillary Clinton that related to the Special Mission Compound in Benghazi before, during, and after the terrorist attack. He was put of, delayed, stalled, then finally refused anything more than the handful of documents he did receive, many heavily redacted. He was not informed by Ms. Mills that Secretary Clinton used another server for her correspondence, and he was wholly unaware of the pointed, specific back-and-forth about Benghazi and Libya between Clinton and her friend Sidney Blumenthal, yet another who was provided with classified information when he was not any kind of State nor government employee. Talk about a breach of the need to know standard.

Blumenthal just one of dozens of Clinton loyalists who are insisting the woman is completely innocent of any wrong-doing. They repeat her mantra that this is all a partisan Republican witch hunt. They and the sympathizers in the media are focused purely on the content of each and every email disclosed, highlighting the silly yoga appointments or the revealing political gossip she shared with her cronies during work hours. Time and again we have heard another mantra, “There is no smoking gun,,” as though expecting to find a full confession written in Dear Diary form in one of the emails. The fact is, the smoking gun has already been discovered: the two servers; they provide evidence of malfeasance. Much of the content of the emails provide evidence for several charges of felony perjury. All of this compounded by the routine public denials, the seemingly endless lies she has told and continues to tell.

Hillary Clinton may invite every friendly member of the press to her home to be asked more pre-screened questions, she can repeat yet once more how she needs to remove all the confusion over her simple goof of being such a lackwit that she just could not manage more than one email account and gosh, if she could go back she’d make better choices. It sounds to my ears as though she is using the ‘dumb woman’ excuse again, the one she has continually pulled out since coming to Washington in 1992. I wonder if her feminist classmates at Wellesley also wish to go back to make better choices for class president and valedictorian.

Kim Davis: “Impossible choice . . . my conscience or my freedom?”