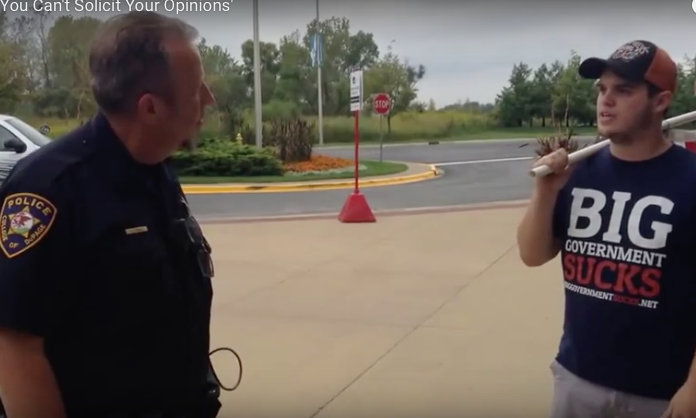 First Amendment – Religion and Expression. Congress shall make no law respecting an establishment of religion, or prohibiting the free exercise thereof; or abridging the freedom of speech, or of the press; or the right of the people peaceably to assemble, and to petition the Government for a redress of grievances.

Some of the folks at the College of DuPage might need a refresher course on the above.  From Peter Fricke of Campus Reform:

Several students at the College of DuPage were told to cease or be “locked up” Friday as they attempted to collect signatures for a petition urging the school to improve its free speech policies.

The two students, along with an advisor from Turning Point USA who was helping them organize a chapter at DuPage, were on campus inviting passersby to sign up for the club and/or sign the petition—and were also distributing pocket Constitutions and non-partisan flyers stating the “America is a free speech zone”—when they were approached by campus police.

“[Y]ou can’t do it out here, otherwise I’m going to have to lock you up.” Tweet This

Joseph Enders, a student at the college, told Campus Reform that he has been attempting to start a TPUSA club for some time, but has had difficulty meeting the school’s requirements for an official student organization. For its part, the College recounts instructing him on the process for starting a new club, but says it has never received the necessary documents from him.

“I’ve had some problems starting the club,” he said. “They told us that we need three members and a full-time faculty advisor, but they wouldn’t let us clipboard.” Enders also claims he has had difficulty finding a willing faculty advisor, primarily due to the need for a full-time advisor, and called the political science department “very liberal.”

Most of Friday’s altercation was caught on video and shared with Campus Reform. The video begins with the conversation already in progress, as the group is questioning the officer about why they are not allowed to do what they are doing.

Read more and please be sure to support Campus Reform–they are doing some great work countering Democrat brainwashing on college campuses:http://www.campusreform.org/?ID=6818