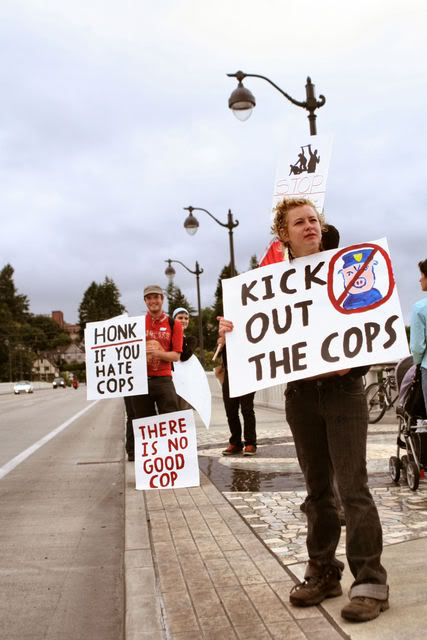 Once again, I find myself sifting through Occupy Democrats’ Meme Weapons with a feather in my cap, always loaded for bear. Apparently, it possesses a new “Weapon of Mass Delusion” in the form regarding Britain’s “disavowal” of all things “law enforcement”. This of course should be a moot point at best because no Leftist ever subscribes to fairness under the rule of law, except of course, when laws are their only protection against total political disaffection. Society for them is to be run by thugs. Yet addressing this will somehow tie me to racism. 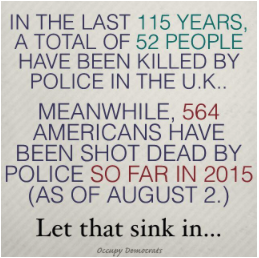 The claim according to the meme (left) is British police have only killed 52 people over the past 115 years. But honestly, I wonder who exactly Occupy Democrats defines as “people”. If I say “those people”, they will claim I am racist for a direct, derogatory generalization. But the lone taxonomy precluding my ever being charged with prejudice is to say “you fetuses”. A baby, by any other name, is no longer a fetal matter for the ghoulish necrophiles at Planned Parenthood. And since part of that farm comprises of the mice into whose bodies fetal organ tissue is grown for research and development, one may never know if Mighty Mouse will arrive to save the day. Verily, it is just another narrative of mice and men.

Like all other claims to “truths” they tell, Occupy Democrats again told a Whopper Michael Bloomberg never managed to regulate in its size. The question, of course, is in their sources. And for the sake of time, I resorted first to PolitiFact. It countered such a claim with the following similar data provided by the far left-wing radical page Addicting Information — which of course, should have been an immediate cause for concern, given the Democrats are dominated by elderly, brain dead hippies and beatniks living off cheap acid, peace, love, Hanoi Jane and ‘Nam.

Like good Marxist-archetypical visual propaganda, Addicting Info resorted to two divergent images of police forces from both countries. In addition, the body count resembles in no small detail a coloring book. Leftists are still learning to color inside the lines as would good toddlers. In doing so, they cry at the sight of white crayons, preferring instead black or browner ones. 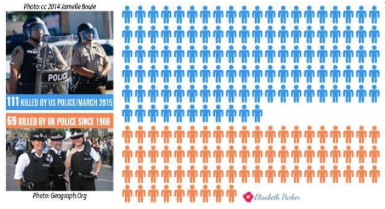 Take note, ladies and gentlemen, how the British policewomen (bottom) do not possess a single firearm, but do seem to brandish batons. And the top image, of course, depicts a brutish SWAT unit Stateside, waiving for protection their shields, and of course, their pistols, sheathed in their holsters. Prior to studying the figures, I would agree with Occupy: Democrats in one facet — it is difficult for unarmed policewomen to kill a perpetrator while posing at ease, looking pretty for the camera. Bestowing the British police its feminine touch, that dirty unit of white American SWAT team boys, heavily-armed, seem intent to bust a brother or a DREAMER’s  knee cap.

Elisabeth Parker is a blogger/journalist for Daily Kos, which purloins Marxist-Leninist virtues. Her source, Killed By Police, measures shootings not by the person, but the links added of these stories to a spreadsheet. Politifact claimed in its April 15, 2015 review as of March (or, the prior month) there were 115 deaths tabulated. The irony, of course, is under what category they fall. In each of 98 cases, the police were involved in the shootings. Politifact claimed, too, that:

“There were 16 cases when a person died from other causes, most frequently when police used a taser. One time an officer accidentally hit and killed a person with his car. In a category by itself, an officer in Hawaii got into an argument with a neighbor and killed him, thus becoming a common murderer completely apart from his role in law enforcement.”

Suddenly, the criteria appear blended through “the big lie”. Such a pyramid scheme only worsens once one understands the United Kingdom in 1900 had yet to add Northern Island as a nation. And like all great scholars, she relied on Wikipedia for her figures on Britain as opposed to British official archived documents. And in response, the British advocacy group Inquest investigated law enforcement archives dating to 1990. By that count alone, there were 55 “official” shooting deaths of civilians by police between 1990 and early 2015.

Ironically, Occupy Democrats conveniently overlooked the following very important term: only Northern Ireland police regularly carried guns… until 2009. Britain was notorious for not recording accurate data regarding criminal statistics. It should be noted the enormously-negative effects of Westminster’s hard ban on virtually all legal ownership, possession and purchases of firearms since 1997 because while law-abiding citizens were submissive to being debarred this right, criminals never stopped buying them at all. Nor, of course, did the police.

The Telegraph in October 2009 reported offenses involving firearms increased in all but four police areas (think precincts) in England and Wales since 1998, in documents revealed by the Conservative Party MPs in the House of Commons. Home Affairs Editor Tom Whitehead reported “One part of the country has seen the problem increase almost seven fold as the availability of guns, and criminals’ willingness to use them rises.” And the figure of civilian deaths or injuries under the Labour governments of Tony Blair and Gordon Brown had at least doubled.

As news emerged the week prior to the article’s publication “that armed police are to carry out regular street patrols for the first time to help combat gun crime in London”, what transpired in 2009 in London is what every liberty-loving, self-reliant American fears most: Britain became a police state not unlike here under President Obama, despite the present-legal possession of firearms under federal law.

If one complains bitterly of “overkill” and of the militarization of America’s police, The Telegraph reported  London was to commission “a hand-picked team from CO19, the Met’s elite firearms unit, will walk the beat in gun crime hot spots in London where armed gangs have turned estates into ‘no-go zones’.” “No-Go Zones” in Europe are often slight-of-hand references to Muslim dominated, Sharia-law legal ghettos. Officers were reported to be equipped with “Heckler & Koch MP5 submachine guns, capable of firing 800 rounds a minute, and Glock semi-automatic pistols.” Apparently Islam’s rise in Britain had grown so problematic by late 2009, two successive Labour governments, in acting upon their politically-correct agendas, suppressed this vital information just as with the human sex trafficking ring recently revealed in Labour-dominated Rotherham.

Yet a Home Office spokeswoman declared, perhaps with a straight face given she is a crooked politician, that:

“It is misleading to compare figures for 2007 / 08 with those from 2002 and before, due to changes in recording practices. There has been an 11 per cent fall in gun crime since 2005 and provisional figures for firearm offences recorded by the police show they account for 0.2 per cent of all recorded crime. We remain absolutely committed to tackling gun crime through targeted policing and tough policing.” 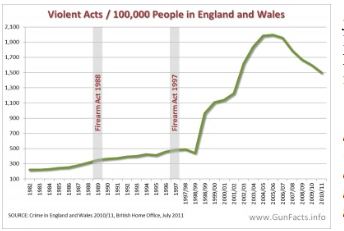 The British bureaucracy, in desperation, continually justify the means to meet their ends, politically. The Home Office spokeswoman, wistfully caught with her knickers down, would attempt to whitewash the “why” from the “how”.

“The police do an excellent job but the rise in bureaucracy, targets and paperwork under the last Government turned the police into form-writers instead of crime-fighters… Increasing government interference in recent years has changed the focus of the police. They have become responsive to targets and bureaucracy rather than to people.” 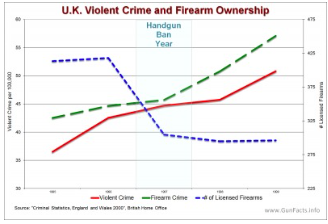 Rather than report the truth, “Targets for reducing crime were perceived to lead to pressure to down-grade priority crimes to non-performance managed crime types.…” Examples are “Grievous Bodily Harm (GBH) to common assault, robbery to theft, or burglary to criminal damage.” And policewomen are heavily-targeted. What might Occupy: Democrats say to such targeting of primarily white Anglo-Saxon policewomen?

So for Occupy Democrats, the truth really is stranger than fiction. We should simply cast the matter aside and just attribute it to “microaggressions” triggering “workplace violence” due to “white privilege”. The truth, they say, would mean the American people might be free to think critically, independent of the auspices of the rising tide of socialist suppression of liberty and vital information for educating the multiple social strata for their benefit. And if all Americans are provided opportunity to choose as it is their natural right, they may not choose to support socialism at all.

Because Law Enforcement Lives Matter, Too