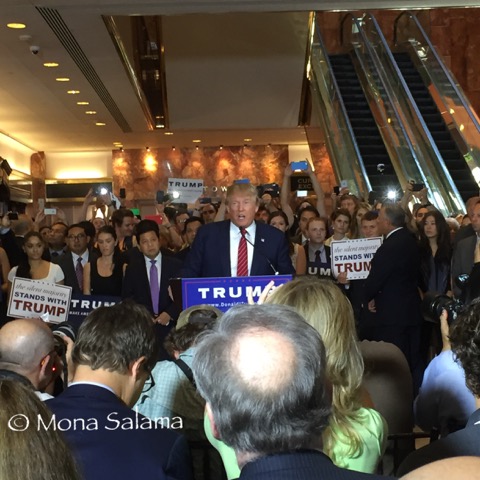 Trump’s bold tax plan was unveiled at a press conference at Trump Plaza lobby in New York City Monday morning.  He vowed to drastically cut income taxes for millions of Americans while the rich, he says, “would face closed loopholes and slashed deductions”.

After his 60 Minutes interview that aired Sunday night, Trump revealed the highly anticipated plan that he called a “common sense proposal that will simplify the tax code.”

Under his tax proposal, it would provide major relief for middle income, a major tax reduction, simplify the tax code, grow the American economy where “all of this doesn’t add to the debt or deficits.”

Calling it simplification, Trump stated the changes will reshape the individual income tax rates from the current seven brackets to four:  25%, 20%, 10% and 0%. Individuals making less than $25,000 per year and married couples jointly making less than $50,000 will pay no form of income taxes. It will eliminate the Marriage Penalty, the Alternative Minimum Tax, and the Death Tax, all he said, which “unfairly hurt middle-class taxpayers.”

Trump estimates that 73 millions of households Americans will not pay income tax under his plan, but would instead send a one-page form to the IRS that says, “I win.”

“A lot of families go through hell over the death tax. It reduces or eliminates most of the deductions and loopholes available to special interests and to the very rich. In other words, it’s gonna cost me a fortune,” Trump said. Currently 36% of American households do not pay income tax.

The Trump plan aims to pay for the tax cuts he announced by reducing or eliminating of loopholes on the rich such as “carried interest.” Under carried interest, hedge funds managers are paid with a fee from the fund’s assets and percentage of the profits the fund generates. These profits are treated like capital gains and are taxed at a lower rate of 23.8 percent. Trump states his tax exemption will end the current tax treatment of carried interests that don’t grow businesses or create jobs.

“A lot of the people that get these deductions are contributing to Hillary, to Bush. They’re contributing to every candidate but Trump. I’m not taking any money, I’m self-funding. Believe me, there will be people in the upper echelons that won’t be thrilled with this,” Trump said.

On tax reduction, Trump’s plan would cut the top tax rate from 39.6 percent to 25 percent as well as cut corporate tax rate to 15 percent from 35 percent. Lowering it to 15%, Trump states it can incentivize American corporations who have stashed cash overseas to repatriate it to the United States. He also spoke of imposing a one-time 10 percent tax on “repatriated dollars held by U.S. companies overseas” where he said the profits “estimated to be 2.5 trillion dollars in profit are kept overseas.”

“The reason companies aren’t bringing it back is the tax is onerous,” Trump said. “I have millions of dollars overseas that I can’t bring it back into this country.”

Trump is the third Republican candidate to release a tax plan during the campaign trail.

Senator Rand Paul’s tax plan calls for a flat tax of 14.5 percent across the board as well as eliminating estate tax and loopholes. Former Governor Jeb Bush announced his proposal plan earlier this month, with three tax brackets:  28%, 25% and 10%.

Senator Marco Rubio released his tax plan in early April in the Senate with Senator Mike Lee before his presidential announcement. Rubio’s plan calls for two brackets of 15 percent and 35 percent as well as creating a tax credit of $2,500 for families with children.