It’s an article of American faith that Japan is an incredibly strange place. The world has been mapped and GPS’ed to death ruining much of the thrill of discovery. There probably aren’t any hidden cities with remnants of lost civilizations lurking in the deserts of Africa or the jungles of South America. That just leaves the land of the rising sun as the X on the map, the strange place that suggests that the world that we know all too well, might still be odder than we can imagine.

But Japan isn’t really all that strange. We are. 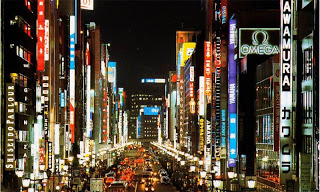 Depressed post-industrial economy, low birth rate, social disintegration and a society obsessed with pop culture and useless tech toys? A country that has embraced pacifism to the extent that it can hardly defend its own borders? A nation where materialism has strangled spirituality leaving no sense of purpose?

We are Japan. And so is Europe. Or rather Japan is the place we all reach eventually.

Japan is strange because it aggressively hurled itself into a postmodern void without knowing what was on the other side. It did this with the same dedication that its soldiers once marched into machine gun fire.

Japan had been in a race with the West, as it had been ever since Commodore Perry showed up with a fleet to open up a closed nation. It wasn’t unique in that regard. A lot of countries tried to do the same thing. Most found that they couldn’t keep up with either our technology or our decline. Japan shot past us in both areas. It beat us technologically. And then it outpaced our decline.

In the 80s, there were dire predictions that the future would belong to Japan. America would be broken up and run by a bunch of Japanese corporations. There were even predictions that after the fall of the USSR, the next war would be with Japan. Some of those predictions came from some surprisingly high profile analysts.

The future doesn’t belong to Japan. It may not, at this rate, belong to anyone. Japan hurled itself into the future, but didn’t find anything there.

Korea hurled itself into that same future and found only emptiness. Now China’s elites are rushing into that same void and are beginning to discover that technocracy and materialism are hollow. That is why China is struggling to reassert Communist values even while throwing everything into making Walmart’s next product shipment. Like Japanese and Korean leaders, Chinese leaders are realizing that their technological and material achievements have left their society with a spiritual void.

That isn’t a problem unique to Asia. Asian countries were just less prepared for a rapid transition to the modern age. Europe and America, which had more time to prepare, are still on the same track.

Japan isn’t really a technocratic wonderland. It has a few robot cafes, but not a lot of ATMs. Its tech companies got by on Western products that initially never caught on in the West, like the Walkman and the tax machine. There’s not much of a digital economy and the computer isn’t all that ubiquitous. Daily life for the Japanese these days is usually lower tech than it is for Americans or Europeans.

It’s not as bad as some Gulf Sheikdom where desert Bedouins fire off assault rifles in view of the glittering new skyscrapers whose waste products have to be manually removed from the building, but the strain of a feudal society rapidly transitioning to the modern world is still there, as it is in Russia.

Like Russia, Japan tried to beat us. Unlike Russia it did, only to stop halfway there and wonder what the whole point was.

And that’s the problem. There is no point.

American technocrats talk incessantly of beating China. But what is it that we’re supposed to beat China to? The largest pile of debt? The biggest collection of light rail and solar panel plans? The lowest birth rate and the most homeless farmers? The greatest disastrous government projects?

A country should move toward the future. But it should have a goal that it’s moving toward and a sense of connection with its past values. 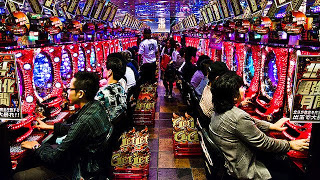 The thing we have in common with Japan, China and Europe is that we have all moved into a post-modern future while leaving our values behind and our societies have suffered for it. It is a future in which stores have robots on display but couples are hardly getting married, where there are high speed trains and a sense of lingering depression as the people who ride them don’t know where they are going, and where the values of the past have been traded for a culture of uncertainty.

Japanese modernism has made for a conservative society of the elderly. That is what Europe nearly had a few decades ago and it is what it would have had if it hadn’t overfilled its cities with a tide of immigrants. Japan survived the consequences of its social implosion only because of its dislike for immigration. If not for that, Japan really would have no future the way that the European countries which have taken in the most immigrants have traded their past and their future for the present.

The cultural eccentricities that Americans fixate on come from a society of young men unmoored from normal human connections, a decline of national values and an obsession with trivial consumerism– all commonplace elements in postmodern American and European life.

The difference is that Japan got there first.

The loonier elements of American pop subcultures were predated by Japan. Indeed the latter are often influenced by the former. The same holds true with petty plastic surgeries, a truly epic plague among Asia’s newly rich, and some of the more ridiculous accessories for living a life with no meaning or human companionship, but we’re all going to the same place. Just not at the exact same speed.

The common problem is that our journey has no meaning. The postmodern world of robots, fast trains and handheld computers is shiny, but not meaningful. It’s less meaningful than the earlier technological achievements that saved lives and made ordinary prosperity possible.

We can go fast, but no matter how fast we go, we seem to keep slowing down. That’s what Japan found out. Its decline was social. And social decline translates into a technological decline, because technological innovation is powered by a society, not some soulless force of modernism. Innovation must have goals. And those goals must be more than mere technology. They must emerge from some deeper purpose.

American innovation hasn’t halted entirely because its tech culture had enough purpose to make the latest set of digital revolutions possible. But each revolution has slowed down, becoming another shopping mall with microprocessors, replicating the Japanese problem. And at some point we’ll run out of revolutions and be left with the skeleton of a digital shopping mall that is no longer anything but a place to buy more things we don’t want and can’t afford.

A healthy culture transmits values. When it stops doing that, it dies. When the values no longer seem to be applicable, than the culture hunts around for new values, it undergoes a period of confusion while its forward motion slows down. That is where Japan is now. It’s where America has arrived.

The values of the left, that are present in both Japan and America, are a cultural suicide pact. The left pretends to add a spiritual dimension to modernism. It has been peddling that lie for two centuries and it has yet to deliver. In countries where it wielded full control, there was neither modernism nor values. Russia destroyed the economic, technological and spiritual potential of generations of its people. China is trying to use Communist values to avoid turning into another Japan, not realizing that those are little better than the collective obligations with which Japan rushed into the future.

As America gazes at the ruins of Detroit and the insanity spewed forth by a digital frontier that increasingly looks every bit as eccentric and toxic as anything coming out of Japan, it is all too clear that we are Japan.

There is no unique insanity in East, only a common disintegration of values in the East and the West. 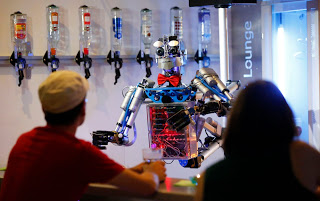 Asia and Europe have both witnessed the rise and fall of civilizations. It isn’t technology that destroys civilizations, but a lack of values.

To understand where Japan and Europe are, imagine an America decaying with no new ideas, losing its religion and values, losing its economy and finally its sanity, becoming coldly conformist and inhuman, while its families fall apart and its youth retreats into their own makeshift worlds. That reality is closer to home than we might like to think.

America is destroying its values on an industrial scale. In a post-industrial nation, the destruction of values has become one of its chief industries. And while there is value in challenging values, in the conflict and clash of ideas, that requires that values go on existing, or there is no longer anything to challenge. And then there is nothing left but emptiness and madness.

Another indicator of economic decline. Another day, week, month, year of empty nothingness.

That is the modern abyss. And Japan is waiting for us there.

Opinion: Why the Pope Shouldn't Have Addressed Congress