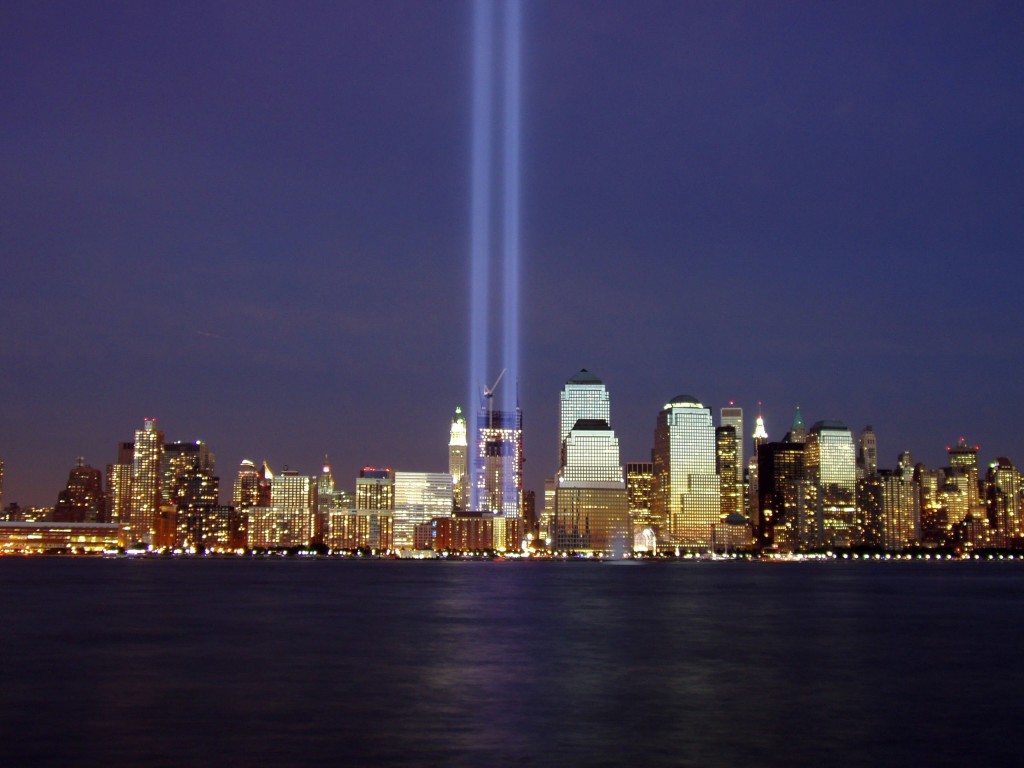 The two white beams memorializing the lost towers cut diagonally across the sky. On the empty white panel of a broken phone booth someone has scrawled “Free Kim Davis”. And on another one and another one following someone’s zigzag route through the East Village’s maze of hipster joints.

We will spend 9/11 debating the merits of letting a terror state that helped the 9/11 hijackers go nuclear. #PeaceWins #LoveWins. The heat and humidity is broken by a thunderstorm. The faint lights vanish behind the clouds.

History must have grown tired of repeating itself because no one talks about it. That old kind of news has become a formality. Our news is a crazed jumble of Kardashians, pet videos and social justice outrages. Media is an ADD lifestyle section where all the outrages that matter are petty.

The big stuff, wars, moon landings, civilizations, doesn’t matter. Everything has been reduced to the lowest common denominator of personal insecurities masquerading as politics and entertainment reduced to fame for fame’s sake celebrities. All of it is calculated to match the workday routine of a twenty-something female college graduate working in media. Because that is mostly who writes it.

What used to be the media is a Tumblr of someone’s favorite TV shows, celebrities, cat gifs and outrages of the moment. Its grasp of politics does not extend beyond its hashtag. Beneath its old fonts and styles is a jumble of social justice warrior phrases of political destruction.

Enemies are “Called out” in tweets and “Destroyed” by viral videos starring failed comedians. These enemies engage in futile “Freakouts”, but are promptly destroyed once more by someone’s abused three-year old who is encouraged to recite their support for trannies, eliminating borders or banning plastic bags by their pierced off-camera Munchhausen progressive politics-by-proxy stage mothers.

Then the failed comedians say something “Problematic” and are “Called Out” in turn and “Destroyed”. Until it is learned that those who called them out have their own “Problematic” history and are “Called Out” and “Destroyed” by the fleas who live upon the fleas of the American dog. And so it must be until there is no one left to call out or destroy.

These are the wars we fight now. Share if you agree. You will be amazed at how we nailed losing 9/11. How these formal memorials perfectly capture the experience of losing a war to terrorists and their leftist allies will bring tears to your eyes. What happens next is not what you think. But mostly it’s exactly what you think. It’s wasted time, wasted minds and wasted lives.

This isn’t America. It’s just the occupied space where its culture used to be. It’s a depersonalized culture of personalities. Its frivolity inversely proportional to the despair of its consumers. But it’s also the America we live in now. It is the arrogance of its rulers, the mindless maze of their minds and the inner despair of their hearts.

Politics and pop culture are only a few of the mirrors of that despair. The Weimar Germany cabaret pop stars celebrating the end of an empire with the destruction of its culture and the politicians glorying in their liberation from any common covenants and lawful limitations are symptoms.

There is still a nation under the shadow of that despair struggling to be reborn, but it does not know how. Its culture is occupied. Its lines of communication are hijacked by frauds and crazies. It has learned that its good intentions count for nothing and so it has learned despair instead.

Its common currency is contempt. Hope was a fraud. Hate is real. Every enemy of social justice destroyed makes the world a better place. Anger is righteous. Knowledge is meaningless.

9/11 has no place in this world. It’s a puzzle piece that doesn’t fit between the cat videos and the Kardashians. There’s way to social justice it up. It’s the elephant in the room. Steel and fire. A rain of ash. Falling corpses. People fleeing past coffee places. Panicked cops shouting wildly.

It’s the end of the world. And the world we have built carefully insulates its consumers from the knowledge of its own shocking fragility. Its algorithms pile on distractions, feeding mass media to mobile phones in techniques garnered from casino slot machines. Buttons are pushed. Shallow momentary emotions are felt. Families fall apart. Civilizations fall apart.

The 9/11 lights cut across a night sky, but they can’t stop the weapons of mass distraction. They are a futile protest against a memory hole big enough to swallow that terrible day and all it meant.

In despair, destruction becomes celebration. When the solutions are difficult, they must be destroyed. When they remind us of how low we have fallen, they must be denounced. These acts are joyful because they liberate the destroyers from responsibility and accountability. They free them from hope. They offer them an imaginary future that lacks the difficulties of the real one.

The only religion at the heart of Islam is a deep despair, in humanity and its own civilization. Its truest expression is the purposeful destructiveness of ISIS. But it has always been what Islam is. That despair is just as present in the heart of the left. Theirs is not the despair of the savage confronted with moral creeds, with empathy and nobility that beggar him, or with technologies that mock him. Theirs is the despair of the egotistical idealist who would rather destroy the world than tolerate its flaws. It is the despair of tyrants that hardens to a cynical amused brutality at the exercise of power.

Our civilization is coming apart.

There have always been many Americas, but they are infinitely fragmenting. The culture that aspires to bond them together has become an insane egotistical monster trying to survive its own crippling insecurities with the personal destruction of others. Millions walk away from it, but have nowhere to go. They tell their own isolated stories on islands of social media, scrawl things on walls and howl at the night. They feel a sense of infinite loneliness at the nation and the culture coming apart.

We are not savages and feral children. We are the inheritors of a great civilization. It is still ours to lose. It is ours to keep if we understand its truths.

We are not alone. A sense of isolation has been imposed on us as part of a culture war. The task of reconstructing our civilization and ending that isolation begins with our communication. We are the successors of revolutions of ideas. We need to do more than keep them alive. We must refresh them and renew them. And, most importantly, we must practice them.

What we have now is not a movement because we have not defined what it is we hope to win. We have built reactive movements to stave off despair. We must do better than that. We must not settle for striving to restore some idealized lost world. Instead we must dream big. We must think of the nation we want and of the civilization we want to live in and what it will take to build it.

This is the America we live in now. But it doesn’t have to be.

The (Continuing) Islamic Revolution of 1979