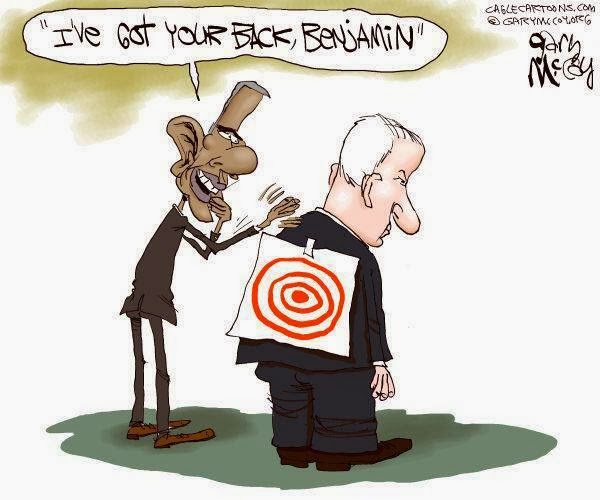 Here is how the pro-Israel theater works.

Every other country has its American embassy in its capital. Except Israel. Every few years, Congress would bring up a bill or a resolution calling or even mandating that the embassy be moved to Jerusalem. Even politicians not known for their great love of the Jewish State would vote for it.

Some like Biden or Kerry would even sponsor them.

The bill would have a loophole allowing a president to waive it in the interests of national security, which he always did, even when he had promised to move the embassy to Jerusalem in his campaign.

The politicians were happy. The pro-Israel lobby got to justify its budget. Some Jews however were baffled why the embassy never seemed to get moved.

A similar farce would play out on other issues like cutting off aid to the PLO. There would be a bill and then a waiver and everyone would issue the appropriate press releases. And terrorists would go on killing people and then getting paid salaries with money provided by US taxpayers.

But Congress is not about to override the White House on Iran, no more than it wanted to on Jerusalem or the PLO. The Republicans certainly didn’t want to be put in the position where their vote against Iran might actually count. And then Obama would blame them.

That’s what the Iran Nuclear Review Act was for.

It sets up a grand theatrical production in which Republicans damage Democrats by splitting the Jewish vote without any of it actually mattering. Everyone gets to posture, to play their parts, not to get anything done, but to advance their own careers.

Some Democrats will ‘choose’ Israel over Iran and win the undying affection of Jews. Others will back Obama to the cheers of the left. The Republicans will chortle over the split in the Dems. A few who know better, like Tom Cotton and Ted Cruz, will grind their teeth at the betrayal.

AIPAC will once again nobly lose, while increasing its donations and membership. The Republican Jewish Coalition will point to this as proof that the GOP is more pro-Israel. J Street will use the number of Jewish Democrats who defected to the Iran side as evidence that they won.

Obama will do what he intended to do all along. And all this will turn out to have been the same hollow charade as the votes over recognizing Jerusalem as Israel’s capital or defunding the PLO.

The game is rigged. It’s been rigged all along.

Some Congressmen really do believe in what they’re doing. There are a few “righteous men in Sodom”, but for the most part Congress is a way of moving money around, of making speeches without taking responsibility, of making grand gestures that don’t rock the boat.

The Republican Party is indeed more pro-Israel ideologically, but Republican ideology is hypothetical. While the Democrats turn left, the Republicans turn in circles. The left acts on its ideology, the right talks about it.

The most anti-Israel Republican administration was Eisenhower’s. The most pro-Israel was Bush II’s. The trend here has mostly been positive.

But while there’s no limit to how anti-Israel the Democrats can go, there is a hard limit on how pro-Israel the Republicans can go. And Bush II was probably it.

The pro-Israel politics of Republican presidents, like the rest of their conservative ideological commitments, is more talk than reality. You can get a Republican president to say nice things about Israel, small government, the value of life, religious freedom and all that, but you can’t get him to do anything about it, like moving the embassy, ending the funding of terrorism or ending the pressure on Israel to comply with assorted PLO demands. That and 5 bucks might get you a cup of coffee on Capitol Hill.

When I encourage Jews to go Republican, it’s not because it will usher in a glorious pro-Israel era. It’s because being associated with a Democratic Party dancing to the fiddle of the left is deeply corrosive. Being around the left is damaging. It’s a destructive movement that poisons everything it touches.

Maybe the GOP can become what it should be. We should certainly work toward that. And the first step is to be realistic about what it is and what it does.

The Republican Party tells conservatives what they want to hear while taking its marching orders from an infrastructure of advisers, experts and consultants who urge it to implement the same old bad ideas while lying to the public.

That is how we got here in more ways than one.

Republican politicians want to win elections without changing anything. They want to do the ‘sensible’ thing which means keeping up the status quo and not rocking the boat. The only way to do that is by lying a lot.

Some Democrats, perversely the ones who actually have retained some sense of right and wrong, are the same way.

So are most organizations. At the end of day everyone just wants to collect their paycheck, put in the same hours they did yesterday following a familiar work routine, and go home.

Our enemies have taken advantage of that. They have taken over the system step by step, by exploiting the apathy of the system in the traditional manner of the left, be the first to show up, be the last to leave, organize, lie, aid your comrades and drive out any form of opposition.

We have been lulled to sleep by the promises and lies of those we thought were on our side.

If we’re going to change anything, let’s deal with these realities. There are no easy solutions. Our friends have no appetite for a fight and our enemies control the high ground. The cavalry isn’t coming. We can change things as long as we are determined to really shake things up.

And that means realizing that much of what we’ve been investing our energy in has been theater, not truth. We can’t change things until we stop letting ourselves be fooled.

None of this means that we should stop fighting the Iran nuke deal.

The harder we fight it, the more significant it will be when the deal comes apart. We don’t want this to be another North Korea in which the opposition goes down the memory hole. We need to be able to say that we fought this disaster ever step of the way and called it out for what it was.

Because this is the beginning, not the end.

It is important for people to understand that. It’s not just the Iran deal where the outcome was known ahead of time. It’s true for most pro-Israel efforts in Congress that bump up against the two-state solution. It’s true for most conservative political efforts for that matter.

Playing that game makes lobbyists, consultants and politicians look good. And we pay them and lose. Nothing will change until we make it clear that we understand the game and that we want real change, not more theater. The left didn’t get its change by playing by the same old rules.

Change happens when politicians recognize that they will be held accountable and that their lies and games have been exposed. It happens when they are forced to realize that the people not only see through them, but that they’re angry and their anger will impact their support and their opposition.

It’s time for the lies to end and for the truth to be heard. It’s time to end the fake votes, the fake resolutions, the theater whose weekly productions change, but whose theme is the same.

There are politicians who want to fight and politicians who want to appear to be fighting. The latter have done more damage than any enemy by draining time and energy, providing false reassurances and empty hopes. It’s time to bring the curtain down on their latest production in which a big chunk of Congress walks away hiding a smirk after having pulled off its latest scam.

Do Islam and Nazi Germany Have Something in Common?

Hillary Clinton's Path of Death and Destruction DOES Make A Difference.