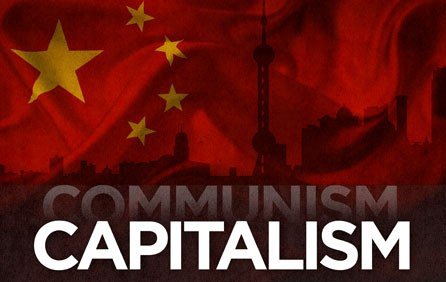 For some time now, the People’s Republic of China has classified itself as a Communist nation. But in the wake of Japan’s economic difficulties in the 1990’s (an event that in many ways foreshadowed similar challenges for the United States a decade later), leaving China solidly situated as the world’s second largest economy with potential to go even further, it has more and more embraced what it calls “Communism with Chinese characteristics”. What this means, essentially, is Capitalism.

In the Chinese economy, private property is emphasized. Free trade is encouraged. People work and earn a living from people who wish to employ them, those being entrepreneurs trying to make it with their own businesses. These owners, with the labor they hire out (thus creating jobs), produce goods which they are then free to trade for their own benefit, often to an international audience all over the world (we all own a few things – perhaps a few too many things – bearing that ubiquitous “Made in China” label). If all of this sounds familiar, it very well should. It’s Free Market Capitalism, and the dirty little secret that communists around the world and throughout history have labored to keep from their own people is the fact that it works. Virtually everywhere it’s tried; Capitalism leads to rampant economic growth and personal prosperity. Unlike Communism, it should be noted, whose track record is the opposite – despite the fact that many nations like China continue to champion the failed doctrine, even as they wantonly betray their own principles for more effective methods.

But Capitalism, being rooted in a basic respect for human dignity and personal freedom, only really works when it is accompanied by liberty. The freedom to choose whom to work for (or to simply work for yourself, if your choice is to accept the risks of operating your own business) must come with the freedom to speak your mind, to criticize the government, to assemble and protest. It must include the freedom to worship as you choose, and seek the comfort of God in your own personal way. None of these freedoms exist in China. Neither do freedom from interference by authorities in business, or a basic concern for the safety and well-being of the workers whose labor makes it possible for owners to thrive.

When people are free under Capitalism, everyone can prosper. But the Chinese system, which recognizes the model’s power but misses its underlying foundations of liberty completely, generally allows free enterprise without respecting the people who fuel that enterprise. Workers toil under abhorrent conditions in China, and safety standards are lax to say the least – as evidenced by the recent industrial explosions in that country that released (among other deadly chemical) sodium cyanide into the surrounding landscape. Chinese products, while cheap and readily available, are reviled the world over for their low quality and questionable concern for consumer health. Poisonous toothpaste and toxic pet food have been traced back to China.

Nevertheless, their brutal, twisted brand of Capitalism has worked for them, from a purely economic standpoint. China’s national output grows every year by leaps and bounds; if it continues in this manner for much longer, they are poised to overtake the United States (and its increasingly socialist policies) as the world’s leading economy. Indeed, China is well aware of the competition from the US, and takes worrisome actions to empower itself over its rival. An alarming amount of America’s vast debt liabilities are owned by China, who continues to buy up more as the US persists in its runaway deficit spending. It has been joked that any new public project which the United States wishes to undertake is paid for by the Chinese – but it isn’t very funny.

Of course, the global economy is interconnected, and ultimately weaknesses in America’s financial position are harmful to the Chinese, too. The recent stock market sell-off sparked discussion of this, raising questions about China’s role in a world in which the United States is economically devastated. Suffice it to say such a scenario would not benefit the Chinese – or, really, anyone else around the globe.

Ultimately, China’s rampant, aggressive economic growth is only possible because of its embrace of Capitalism. This in itself is laudable, but China has missed the real point of the capitalist economy: That it is built upon and meant to strengthen the freedom of the people living within it. For the good of its own citizens, China would do well to recognize this emphasize freedom in other parts of its culture – not just the marketplace. Their growth rate may be more modest, but their prosperity would continue – and the Chinese people could actually benefit from and enjoy that prosperity, too.