The Colorado GOP continues to struggle with properly disclosing financial transactions on FEC reports—this time marking the checkbox that states secured for an unsecured line of credit from Centennial Bank. Reporting the line of credit as a secured loan prompted questions by Republican activists on if the party is attempting to hide information on bank transactions that appears to be in violation of federal regulations.

Activists expressed concerns in an August 27th email to state party Chair Steve House that the line of credit is a “prohibited donation” under FEC rules. The loan may violate Title 11 of the Code of Federal Regulations (CFR) as there was no pledged collateral or pledged future receipts, with no description of the alternative basis for assurance of repayment.

House’s email response indicated that this would only be a matter of concern if the party defaulted on the loan. He wrote in defense of the loan based on guidance from party attorney Chris Murray of Brownstein Hyatt Farber Schreck: “Because the FEC typically enforces prohibited loan provisions against standing committees (like party committees) only if and when a loan is defaulted on, loans that are otherwise commercially reasonable that are paid on time will not draw FEC enforcement.”

In two separate follow-up emails, Republicans contacted the state chair noting that civil penalties can reach 100% of the loan proceeds for a violation, 200% if the violation is “knowing and willful,” and that willful illegal contributions exceeding $25,000 can carry punishment of up to five years imprisonment.

Garcia also posted a comment admitting to no money to repay the loan:

The social media exchange can be read in full here.

The loan balance has been a lingering point of contention with activists for months due to the state party failing to report both withdrawals from the line of credit. The transactions were finally reported in the July filing as secured loans—causing a cascade of amended filings for previous months.

No payments on the withdrawals from the line of credit have been reported.

At a recent Pueblo County meeting, House admitted to 5.5 million in liabilities: “In our particular case, it’s like five and a half million dollars negative of retained earnings because we don’t actually operate like a company. That’s not how a political committee operates.” House also stated in an email to the Archuleta County Chair that the party is in “dire financial straits.”

Here is a screen shot from the August 2015 FEC filing showing that no payments have been made to date on the January draw of $60,000 from the line of credit, marked as a secured loan:

Here is a screen shot from the FEC loan documentation which clearly shows the line of credit as an unsecured loan. Note the box left blank which asks for a statement on “the basis upon which the loan was made and the basis on which it assures repayment.” 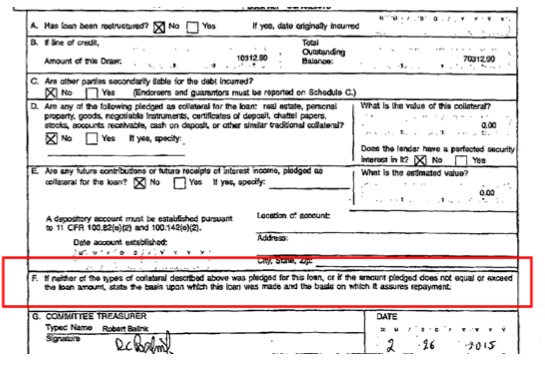 The documentation states, “This institution is aware of the requirement that a loan must be made on a basis which assures repayment, and has complied with the requirements set forth at 11 CFR 100.82 and 100.142 in making this loan.” Here is a screen shot with the signature of the bank’s Senior Vice President, Davis Butler (oops, his typed name was left blank):

“We don’t comment on any particular filing of a candidate or committee.

After reports are filed with the Commission, they are reviewed to ensure compliance with federal campaign finance laws, agency regulations and reporting requirements by our campaign finance analysts. Potential issues of noncompliance could be outlined through written correspondence, which are made public through our website. Generally speaking, failure to respond to these letters, and to take corrective action could result in enforcement action.”

Why Are Muslim Men Entering a 14-Year Old's Room?