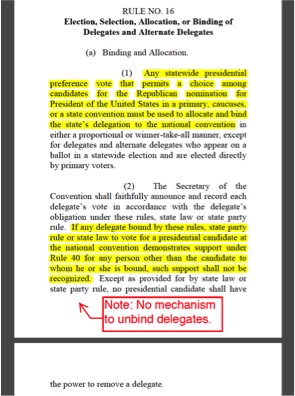 The Colorado Republican Committee voted in their August Executive Committee meeting to not hold a straw poll at the 2016 caucuses. The vote comes on the heels of the 2012 RNC rules change that specify delegates must be bound to the results of statewide straw polls, otherwise referred to as presidential preference polls.

The RNC rules do not explicitly state that a delegate bound to a withdrawn candidate could be released as an unbound delegate. There is no mention of a mechanism anywhere in the rules to release the delegate as unbound.

Rule 16 states in reference to delegate binding: “If any delegate bound by these rules, state party rule or state law to vote for a presidential candidate at the national convention demonstrates support under Rule 40 for any person other than the candidate to whom he or she is bound, such support shall not be recognized.”

RNC Press Secretary Kirsten Kukowski—who is now part of the Scott Walker presidential campaign— spoke about the rule change during the 2012 Tampa convention: ”What we’re doing is we’re implementing a penalty phase so that you can do what you’ve always done, as far as putting delegates…in chairs. But if those people do not vote the way they’re bound to do, then essentially it’s all null and void. They’re no longer delegates.”

(Delegates attending the national convention pay their own way—including food, lodging, transportation, and delegate fees. Many delegates take time off from work and sacrifice family time at great personal and financial cost.)

Historically, Colorado has held only three straw polls. All were for fundraising purposes, not for binding delegates. Candidates who wished to participate in the straw poll were required to pay a registration fee—reportedly as high as $5,000.

In the 2012 election, delegates would have been bound to straw poll winner Rick Santorum and then disenfranchised under the current rules because Santorum withdrew from the race before the national convention. (The eventual GOP presidential nominee Mitt Romney placed second in the straw poll.)

An FAQ on the Adams County Republican Web site regarding the Colorado straw poll as it relates to the binding of delegates puts the issue in perspective: “Despite coming in second in the straw poll with 35%, Romney garnered 78% of the Colorado delegation vote in Tampa – because delegates were free to vote their conscience.”