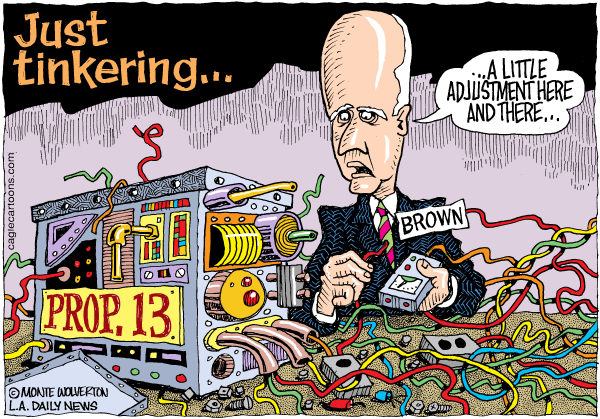 Passed in 1978, Proposition 13 was a huge victory for fiscal conservatives in the state of California. It sharply cut taxes by about 57%, made future tax hikes more difficult by requiring a two-thirds majority in both legislative houses for their passing, and gave property owners peace of mind by allowing them to more accurately predict their tax liability in future years (tax chaos had been a huge problem before Prop 13’s passing). In short, it softened and simplified taxation on millions of people, and made the risky and stressful act of owning property immeasurably easier for everyone.

That’s why it’s so unfortunate and dismaying that Democrats have been after it pretty much since it passed. The latest attempt was Senate Bill 1021, which removes many of Prop 13’s protections and allows “split roll” taxes to fund schools. As reported by calwatchdog.com, the Senate analysis of the bill describes it thusly:

The “Borikas decision” referenced in the analysis is Borikas vs. Alameda United School District, a California Courts of Appeal ruling which found, as stated by Government Code Section 50079, that only “taxes that apply uniformly to all taxpayers of all real property within the school district” are permitted. Anything that imposes what the court called “differential tax burdens” is called a “split-roll” tax.

Bill 1021 violates this uniform tax protection. As Gina Rodriquez, Vice President of State Tax Policy at CalTax, said: “The bill … allows school districts to impose layered parcel taxes. A school district could impose a parcel tax based upon square footage, and based upon the classification – for the same parcel. Of critical importance, however, is that if parcel taxes are split, homeowners would lose their parcel tax deduction, and face higher state and federal income taxes. To be deductible, real property taxes must be levied for the general public welfare ‘at a like rate against all property’ in the taxing authority’s jurisdiction.’

In other words, 1021 is yet another unconscionable stab for higher taxes from Democrats hungry to strike down Proposition 13. With the problems being faced by California in modern times, the last thing the state’s residents need to deal with now is a greater tax burden. When taxes are kept as low and manageable as possible, everyone benefits.

This is a serious problem, with real human consequences. Government “regulation” – a polite term for direct interference in and restriction over private affairs – has gone mad, striving to remove protections against excessive property taxes and other instances of official overreach. Government representatives don’t seem to understand the fact that taxes are not free money; they come from hard-working people, who may not always be able to afford them. Yet despite the fact that California struggles with the highest poverty rate in the country, still ways are ever sought to increase taxes and stifle the very private enterprise that has the power to lift people into better financial straights.

The result of this, of course, is harm to the state of California. People burdened by oppressive taxation that they cannot afford will move away from the state that is so burdening them, and they will take their businesses with them. California’s economy will suffer as industry after industry is denuded, fleeing the place that refuses to let them operate freely. Jobs will be lost, the benefits of a robust business sector will be enjoyed by other states, and – in the ultimate irony – tax revenues will in fact be reduced by the simple fact that there is now less to tax. Those who use hostile regulatory tactics and excessive taxation to chase out the people who give them money, are not entitled to surprise when they stop receiving that money.

What is truly tragic is that these aggressive taxes are not necessary. There are exacted from private citizens (again, some of whom have low incomes) to be applied to bloated social programs the government has no business running in the first place. It’s a classic example of the damage that can be wrought by a government that reaches beyond its moral and just authority.

California – and by extension, the rest of the nation – does well to heed the basic rule of history: Government is the enemy of freedom. Some of it is essential, but the less of it we can get away with, the better!

Greece to the Rescue?