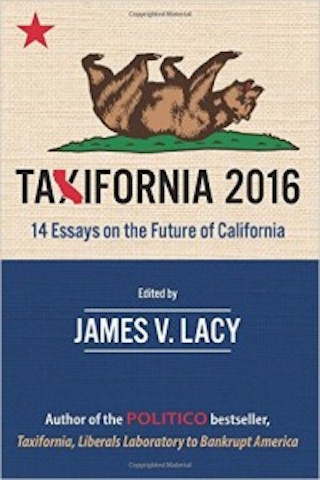 A sequel to Lacy’s book Taxifornia: Liberals’ Laboratory to Bankrupt America, Taxifornia 2016 is a collection of 14 essays authored by conservative and libertarian writers. Like a documentary on the making of a gruesome horror film, Taxifornia 2016 is a behind-the-scenes explanation detailing how California has become the Democrat party’s Frankenstein monster threatening to wreak havoc on its unsuspecting taxpayers.

California’s 800 pound Frankenstein in the political living room is the unfunded pension liability made possible by the alliance of Democrat officials and unions. Taxifornia 2016 is a damning indictment of that relationship. The unfunded liabilities for the state’s two largest pension system, CalPERS and CalSTRS, total “at least $190 billion combined” and may actually exceed $500 billion depending on projected rates of return (p. 131). The Little Hoover Commission has concluded that such rising pension costs “will crush” California government. Lacy and his contributors expose how the deals are made and the names of those in the backrooms making those deals — Senator Dianne Feinstein’s husband Richard Blum and Secretary of State Kamala Harris to name just two.

Packed full of current facts, figures and analysis of political history, these essays present a vast, well-documented and timely storehouse of information for those seeking to understand and change California’s political fortunes and finances. From unions, immigration, taxes, cost of education, demographics, high speed rail to nowhere, and the political price of water in the state, Taxifornia 2016 meticulously details the problems created by Democrat policies and tortured judicial reinvention of legislation approved by California voters. As one of the contributors explains, “[i]t is not drought or wildfires or earthquakes that are the greatest danger to California’s citizens. It is the government itself.” (p.3)

This book should serve as a warning for all of America. It is the behind-the-scenes look at the Democrat takeover of California through growing a centralized government. I’m no Nancy Pelosi. You’ll have to read Taxifornia 2016 first to know what’s in it. Then you will recognize how Democrats are repeating these tactics in other states.

As I read, I realized how very great California’s private businesses and individuals must be to withstand this regulatory onslaught year after year. The book offers great hope despite the Democrats’ one party rule because of the state’s initiative process and “well organized and tech savvy” grassroots organizations like TeaPAC (p. 167), predicting favorable tax cutting initiatives in the coming election cycle. And every essay in Taxifornia 2016 offers real, practical legislative solutions to fix the looming state insolvency and return California to prosperity. . . if the voters learn and act in time.

If not, when California declares bankruptcy and the federal government swoops in to save the state-too-big-to-fail, Lacy’s book will stand as witness against those who will have orchestrated the biggest government takeover in America.

How Do We Know What Politicians REALLY Believe, and Does It Matter?

10 Ways To Teach a Child or Teen Accountability and Responsibility