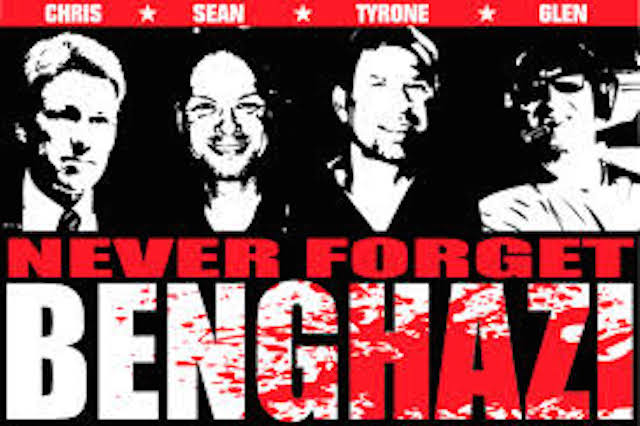 Sean Smith was my nephew by his marriage. He was a great family man and a dedicated servant to this country. He deserved far better and his death is a continuing shadow on our family’s heart. September 17, 2014 is also the one year anniversary of the first Benghazi Select Committee Hearing. From December 2012 thru April 2014, I worked tirelessly on petitioning Congress, House Speaker Boehner, and other government officials requesting an establishment of a bipartisan Select Committee that would get to the bottom of Benghazi.

This was accomplished by hundreds of phone calls, letters, e-mails, and the efforts of many fellow citizens who also wanted the facts. It also required hundreds of hours of research and analysis to understand what happened in Benghazi.

Many of my questions have been answered. But I still have several questions that the Benghazi Select Committee needs to address.

By 2011, Gaddafi was a 4th tier dictator and was actually jailing members of al-Qaeda. Libya was actually prospering as a country. He was no major threat to America. Yet, President Obama and our Nato “allies” decided it was time to institute an illegal, without Congressional approval, regime change.

America gave 400 tons of weapons to Islamic extremist rebels that included members of the February 17th Brigade and a group later identified as ISIS. Additionally, operatives who were linked to Egyptian President Morsi provided tactical support to the rebels later known as the Benghazi attackers.

This action may have been without the approval of congress, but not without their knowledge. Senator John McCain was directly involved in arms negotiations with Islamic extremists and Syrian rebels. Additionally House Speaker John Boehner knew exactly what we were doing in Libya.

Kristi Rogers, wife of former House Intelligence Committee Chairman Mike Rogers, ran a private military contracting firm that was involved in recruiting security in the region, including Libya. This is one many reasons why Chairman Rogers and Speaker Boehner were so opposed to the establishment of an independent Benghazi Select Committee.

When Gaddafi was murdered, Libya was thrown into chaos. The jail doors were opened and the Arab Spring became the al-Qaeda Winter. This chaotic atmosphere lead directly to the Benghazi attacks.

Considering the importance of the September 11th anniversary to Islamic extremists it is absolutely inexcusable that then Secretary of State Hillary Clinton did not provide, and actually reduced the amount of security personnel, in the US diplomatic outpost in Benghazi on September 11, 2012. Evil is as evil does. The arrogance, incompetence, and narcissism of Hillary Clinton lead directly to the deaths of four Americans. Now many of the Benghazi attackers are members of ISIS.

The first rule of military protocol is to never leave anyone behind. Secretary of Defense Leon Panetta, and the Obama administration, have a lot to answer for and Panetta directly lied to Congress when he said assets were not available. Assets were available in that region and should have been deployed at least sometime in the 13 hour attack. And I ask again: Who gave the stand down order? Where was President Obama? Why no consequences for the Obama administration regarding the illegal gun running operation form Libya to Syria? I still have unanswered question and prayers regarding Benghazi as we approach the third anniversary.

I pray that we elect a President in 2016 who has a moral compass, who doesn’t arm and fund our enemies, who does not overthrow heads of state because they oppose a new world order, and who does not operate in the shadows of the Oval Office.

Lastly, I pray that President Obama, Hillary Clinton, Leon Panetta, and all those involved in the events that lead to the Benghazi attack are held accountable for their criminal acts. The lesson of Benghazi is that both political parties share the guilt.

"The Catastrophic Iran Deal" With Daniel Greenfield and Ari David