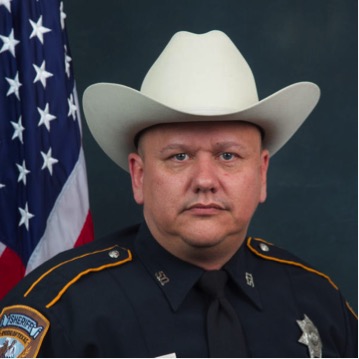 Deputy Darren Goforth, a 10-year veteran of the Harris County Sheriff’s Office, was ambushed Friday night at a suburban Houston Chevron station. Goforth, 47, was pumping gas into his patrol car when a gunman approached him from behind and fired multiple shots.

Harris County authorities have arrested and charged 30-old Shannon Miles with capital murder in the killing of Deputy Goforth. Officials said Miles is the individual captured on surveillance video where a dark-skinned male is shown approaching Goforth from behind and shooting him several times in the back. The shooter continued to fire even after the officer had fallen to the ground.

Miles was apprehended when authorities located the red Ford pick-up also on the surveillance video, which was parked near where Miles resided.

Miles has a criminal history that includes convictions for resisting arrest, trespassing, and disorderly conduct with a firearm.

Harris County Sheriff Ron Hickman claims Goforth was singled out because he was wearing the uniform of a law enforcement officer. The sheriff made it clear he felt the shooting was tied to a national backlash over several recent killings of unarmed black people by police officers.

Hickman condemned the “very dangerous national rhetoric” about police officers that he said was out of control:

“When rhetoric ramps up to the point where cold-blooded assassination has happened, this rhetoric has gotten out of control,” he said. “We heard ‘black lives matter.’ All lives matter. Well, cops’ lives matter too, so why don’t we drop the qualifier and say ‘lives matter’ and take that to the bank.”

“It’s time for the silent majority in this country to support law enforcement. There are a few bad apples in every profession. That does not mean there should be open warfare declared on law enforcement.”

(You can it watch here: https://www.youtube.com/watch?v=eV9VGZXmS70)

Goforth’s wife, meanwhile, released a statement Saturday calling her husband her best friend. “There are no words for this,” she said.

Hundreds gathered at a vigil Saturday evening to mourn the loss of the Texas deputy. The crowd, gathered at the Houston Chevron station where Darren H. Goforth was gunned down, were led in prayer and observed a moment of silence for Goforth and the sheriff’s department.

(HERE is a KHOU clip from the vigil.)

Many who attended the vigil said they were there to support police. Some said that they were also frustrated with what they said was an increased hostility against all police.

Officer Roland Delasantos, who has known Goforth since they were both in the fourth grade, said Goforth was “a very genuine guy” and that “most of the officers who are out there, are there to help and to do good.”

Just as Black Lives Matter, the life of Deputy Darren Goforth did indeed matter to his community as well.