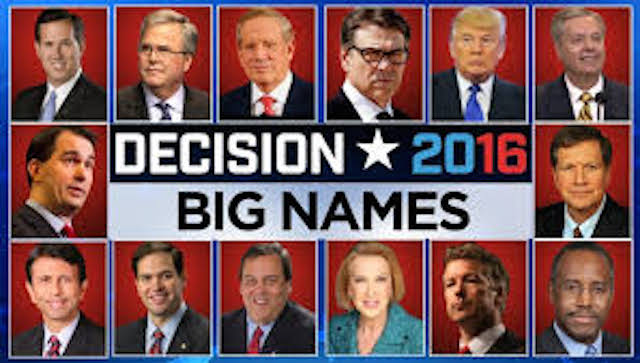 In a recent WSJ front-page story, it was reported that the first FOX News debate, aside from the Trump v. Megyn Kelly fireworks, officially set the divide for two GOP camps: fighters and statesmen. Upon reading this assumption, it occurred to me that we need not one or the other, Americans need both in a leader to brush off that feeling of self-hatred that has been penetrating left-leaning, mainstream media outlets since Obama became POTUS.

On one side of the ring fighters, Trump, Paul and Christie and even Huckabee, who took turns jabbing at each other on various issues including NSA wiretapping, religious freedom and the current administration’s foreign policy track record. On the other, a more subdued and calculated group of statesmen including Bush, Rubio, Walker and Kasich, leaned toward diplomacy on policy issues such as Medicaid expansion, job growth and Planned Parenthood. Then there are the others that fall somewhere in between. But, let’s not forget Carly Fiorina who many agree killed it in the first debate tapping into both her fighter and stateswoman side.

The philosophical debate continues to be which type of GOP candidate or president does this country really need now and why to fix the mess upon us. As mentioned in the WSJ story, are voters looking for a candidate who channels their anger, or one who acknowledges it and can move beyond it as the contest matures.

While certainly not quantitative, the following email from a dear, liberal friend who resides in Cleveland sent me the following email the morning after the debate. Her thoughts shed light on America’s angst over what type of person should lead the country next.

Just wanted to tell you how impressed I am by Carly Fiorina after last night’s debate. She is so inspiring and I really like that she is not a politician. I think this country needs someone who knows how to run this place like a business. She makes so much sense when she is talking about how she is going to run things. No political BS when she opens her mouth. Wouldn’t a HRC/Carly run be exciting? If she’s the candidate, I think Hillary has a good chance of losing. Lots of women (including me) might consider switching sides and voting Republican. Hope things are good in Salt Lake!

While slightly surprised, I was also equally uplifted.

I feel more confident now than ever that the American electorate, no matter party affiliation, is ready to choose someone very different next year regardless of whether it is a man or woman. That someone will be intellectually confident, prepared to fight the good fight, know when to pull back and instill a sense of pride in Americans that has grown dust over the past two presidential terms.

The next president will need to embody the fighter and the diplomat; and know preemptively when to apply and blend those traits to effectively get the job done and heal the American psyche.

As ISIL terrorism mounts worldwide, lone wolves kill innocent people on American soil. Law enforcement across the country is hammered by angry citizens and rabble-rousers such as Al Sharpton. And, the U.S. electorate doesn’t appear to be satisfied with the status quo anymore. Most voters, it seems, want more even if they can’t put their finger on exactly what they want and expect from their leader.

I am convinced that the more voters are seeking can’t come from someone who is pure fighter or acquiescent statesmen. I don’t know about you but my choice for next president will comprise both traits. The presidential nominee will be able to apply principles and values to policy and then understand how to convert policy decisions to actionable engagement with citizenry that lifts the entire nation not just one group or the other. Superior communications will be required to transform policy that resonates nationwide and spans cultural divides. A tall order, yes, but doable for the right candidate.

As a communications and PR professional for almost 20 years and a political campaign strategist for Utah’s AG more recently, I sometimes intellectually struggle with the idea that so many candidates who seemingly look great on paper many times end up falling flat on their faces with the American electorate while others don’t. I suppose this is part of the natural parsing process.

Let the tough reporters like FOX News’ Megyn Kelly, Bret Baier, Hannity and O’Reilly ask all candidates the tough questions and hope CNN, CNBC, ABC and the other affiliated networks do the same. Let Trump keep on whining, and the other candidates present themselves on policy and personality — fighter, statesmen and everything else in between. At the end of the day, this is the only way the cream of the GOP crop will ultimately raise to the top.