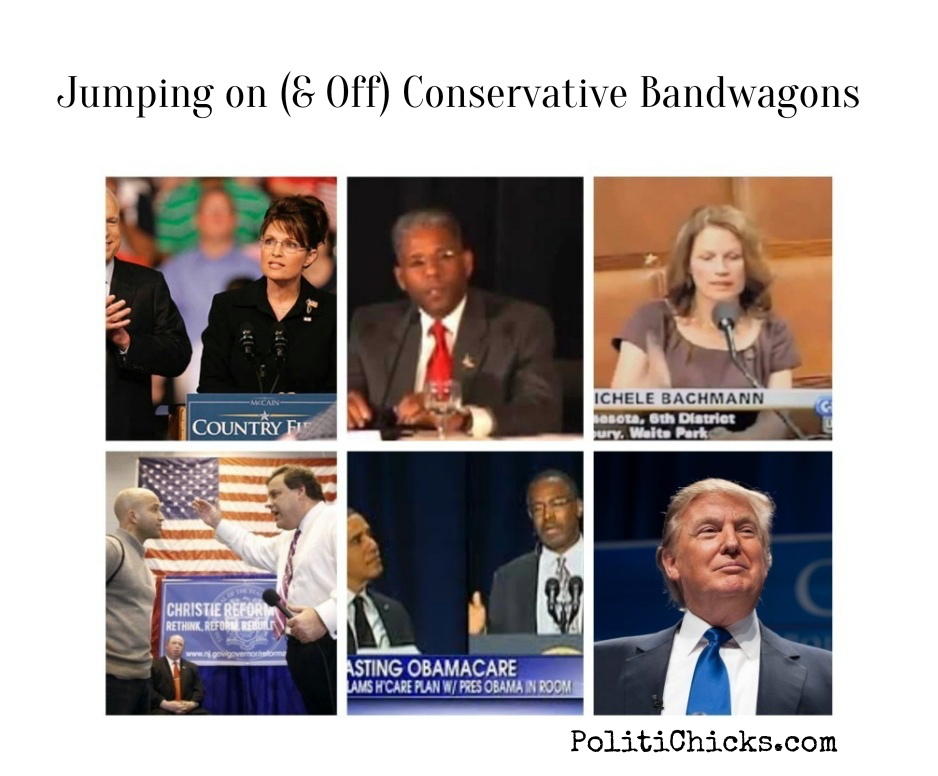 Monday morning as a guest on Alaska’s Michael Dukes Show I talked about the seemingly unending hoopla surrounding last week’s GOP debate. For months social media has been filled with articles and commentary about ALL THINGS TRUMP, either criticizing or praising him.  There are no ‘tepid’ responses–people are either passionately hot or icy cold.  Meanwhile, the always-confused RNC is scrambling to get rid of Trump, baffled to find that their usual tactics aren’t working.

What too many DC political elites don’t seem to understand is that every time anyone steps forward and loudly, fearlessly projects conservative values, the grassroots base rolls out the Conservative Bandwagon–and that is exactly what they’ve done for Donald Trump.

Trump, world renown with the ability to play the mainstream media like a Stradivarius, has been  a ratings-driven celebrity for many years.  Following the old PR rule that “any press is good press”, Trump’s words have been used as sound bites and his personal life fodder for the tabloids since the 1980’s.  Yes, he has been a major supporter of Democrats and their causes and he has been on the opposite side of multiple conservative values–and yet despite everything, he remains a vehement favorite of millions of conservatives.

While everyone is simultaneously freaking out and dancing for joy out about this, remember:  This isn’t the first time conservatives have enthusiastically begged someone to run for president.  Many times the recipients of the begging have been deserving–other times, perhaps not.

As a reminder, here are a few of those “Conservative Bandwagons” that have been jumped upon (and in many cases, jumped right back off of):

Sarah Palin.  It’s difficult to imagine now, but before John McCain (very wisely) selected a then-unknown Alaskan governor as his running mate in 2007, few had ever heard of Sarah Palin.  After hearing her first speech at the 2008 RNC (see below), Palin became an overnight Superstar and she quickly overshadowed all-things-McCain.   Because the entire universe seemed to be talking about her, the Left had no choice but to go after Palin with all their might–and they did so mercilessly and unrelentingly, attacking everything from her looks to her family.  Many conservatives say the only reason they voted for McCain was because of Palin and yet soon after the election the Republican Party (and many conservatives) strangely, sadly, backed away from her…
Congresswoman Michele Bachmann.  In 2009, long before Sen. Ted Cruz talked about the #WashingtonCartel, a then-unknown representative from Minnesota gave a speech on the House floor about ‘gangster government’ and Washington cronyism. From that point on, Congresswoman Michele Bachmann won the hearts of conservative America.  And after seeing the way she fearlessly spoke out against the atrocities of everything from Islam to Obamacare, people begged her to run for president, which she did in 2012.  Many of those same people backed away from Bachmann when they saw the ravenous way the media and the Left mercilessly attacked her (and her family), but she continued to be one of our most courageous conservative leaders until finished her congressional run this year.  Here is the video in which America first learned about Bachmann:

LTC Allen West.  Few people knew who LTC West was until they saw the following 2010 YouTube video in which West was a panelist with other military experts. The video took place at a time when most of our high-ups were so entrenched in political correctness they didn’t dare speak the words ‘Islamic terrorism’.  So when a Marine asked a very serious question about Islam, after a bit of uncomfortable laughter until one of the panelists (wisely) deferred the question to West.  As a result, in addition to being nationally recognized as a real-life military hero, LTC West became a conservative hero as well, winning a Congressional seat (but losing reelection after the DC Elites zeroed in on him).  West hasn’t chosen to run for president yet, but many conservatives are hoping he will someday.
Gov. Chris Christie.  When a NJ teacher asked New Jersey Gov. Christie about his stance on unions, his response captured the attention of the entire nation and as a result, people started talking about “President Christie.”   Things started going south when those same enthusiasts learned he wasn’t quite as strong about much of anything else, and many continue to blame him for losing the 2012 presidential elections after cozying up to Obama.  (Rand Paul even put in a dig about that during last week’s debate.)

Dr. Benjamin Carson.  In 2013 conservatives fell head-over-heels in love with a then-unknown doctor who spoke at the National Prayer Breakfast.  Dr. Carson was doing what few could imagine anyone doing–denigrating political correctness and speaking out against many of Obama’s policies, despite Obama sitting right next to him.  Even though Dr. Carson had a 2009 movie made about his life, until the Prayer Breakfast few knew who he was.  As always, conservatives everywhere were begging Dr. Carson to run for president.  A PAC was created with rabid Carson fans attending conferences across the U.S.  Many conservatives fell “out of love” after reading his autobiography and learning his stance on the 2nd Amendment was less-than-strong, but here he is in 2015, running for president.

Regarding Donald Trump and his meteoric rise among conservatives, if history repeats itself (as the examples above have shown) he, too, will eventually fall off that pedestal.  When/if that happens, hopefully–if he really cares about conservative values as he vehemently proclaims–he will put his money where his mouth is and he’ll throw his vast power behind the right candidate and help put a conservative Republican in the White House in 2016.

When The Internet Trolls Hillary