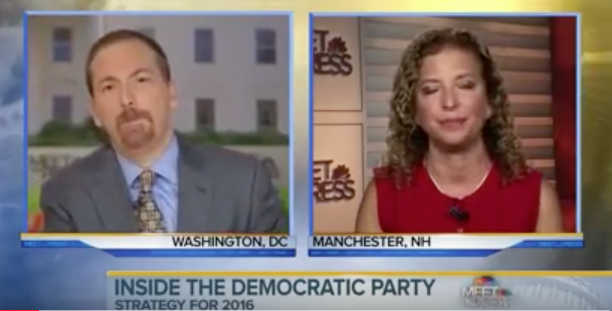 After being offered a second opportunity on Sunday’s Meet the Press to explain the difference between a Democrat and a Socialist, Democrat National Committee Chair Debbie Wasserman Schultz again refused to answer the question. The Florida Congresswoman appeared stymied in the Chris Matthews interview in which the question was originally posed.

In a blog post titled, “Motivated by Chivalry and Compassion, I Offer some Advice for Debbie Wasserman Schultz,” economist Dan Mitchell provided the DNC chair with a response to use in future interviews.

Here is what Mitchell says Wasserman Schultz should have said:

“There’s a big difference. As pointed out by my good friend Dan Mitchell, socialists technically believe government should own the means of production, which means government-owned and operated steel mills, car companies, railroads, banks, etc. Democrats, by contrast, believe in nominal private ownership of the means of production, but with lots of subsidies, handouts, redistribution, protectionism, intervention, regulation, and bailouts. The bottom line is that Bernie may call himself a socialist and his rhetoric may be rather heated, but his views – and voting record – make him a conventional Democrat.”

PolitiChicks CEO and Editor-in-Chief Ann-Marie Murrell responded to the DNC chair’s failure to state the difference between a Democrat and Socialist:

“THIS is the reason the GOP can’t ‘compromise’ with today’s Democrats.  When their mouthpiece no longer feels the need to separate their party from Socialism, any ‘compromise’ is a compromise to America’s foundation, prosperity, and liberty.”