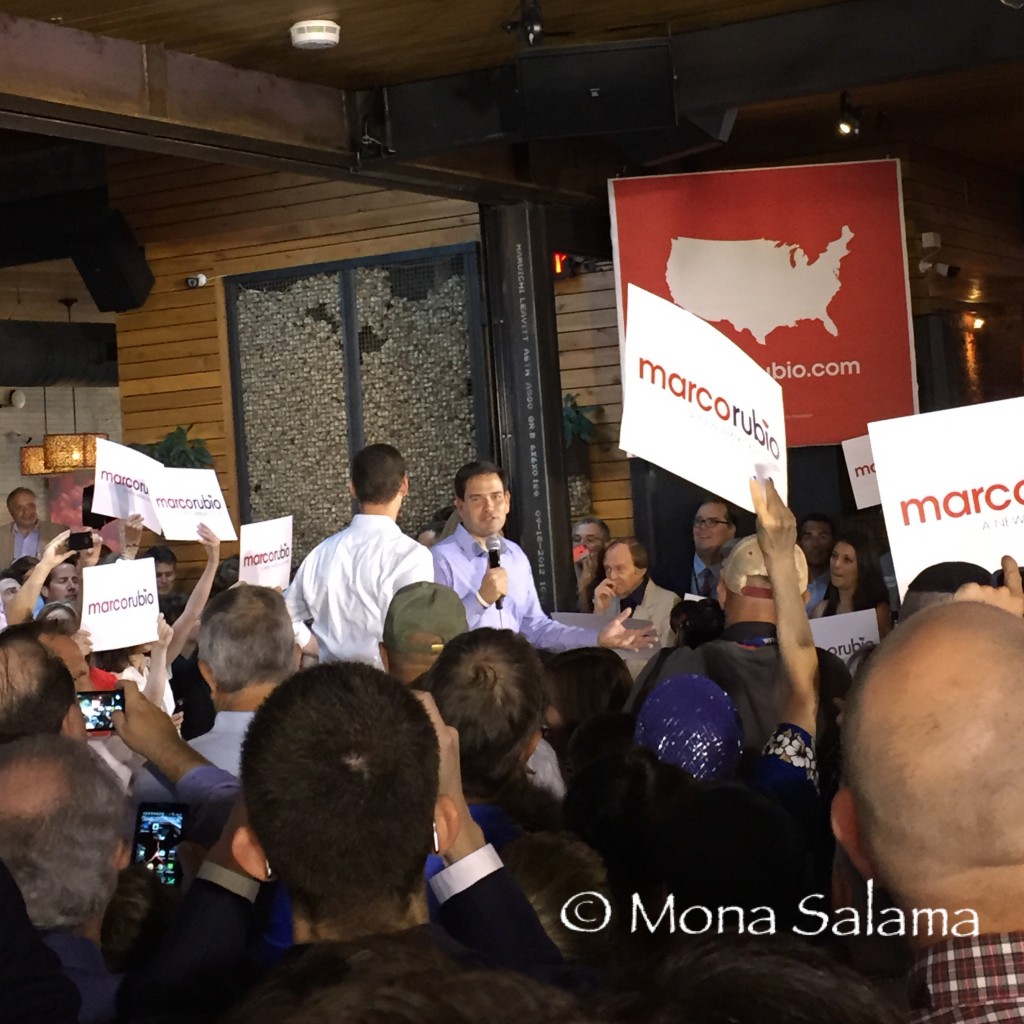 A young, vibrant crowd of more than 400 gathered at the downtown Cleveland bar called “Town Hall” to hear his heavy economic policy remarks. Delivered without notes or a teleprompter, Rubio made the promise that if elected president he would pass a balanced budget amendment and spoke of his vision of making the U.S. a stronger competitor again.

Josh Mandel, Ohio Treasurer and Rubio campaign chairman for Ohio, hosted the welcome rally. Mandel introduced the Senator as a “rare breed of politician; one who will unite the party and inspire the younger generation, such as past president like JFK and Ronald Reagan did.”

When Rubio took the stage, he began with a joke the audience didn’t seem to really like. “I know there’s a debate tomorrow. I came in here early today trying to convince LeBron James to come back to Miami.  I just wanted you to know.” With the audience groaning, he quickly added, “Don’t worry it didn’t work, it didn’t work.”

Rubio then blasted President Obama, the Iran Nuclear Agreement and the new EPA regulations on power plants.  The Clean Power Plan sets national standards on limit carbon dioxide emissions from power plants as a means to bring clean energy technologies. “The world won’t get any cooler,” Rubio said. “The seas won’t get any lower. It will only increase the cost of living in this country…We are tying our own hands under this new regulation as higher utility bills will devastate many Americans trying to raise their children in Cleveland, Ohio or Miami, Florida, or anywhere else in this country.  To see that her bills go up by $50 a month, that’s devastating,” Rubio said. “You know what that means? That means the kids don’t get new shoes this month.”

Regarding Iran, Rubio characterized Obama’s foreign policy as a plan seeking to be “nicer to our enemies and meaner to our friends.” Rubio promised if elected he would impose economic sanctions on Iran that will force Iran to shut down its nuclear program. “Iran will have a very simple choice: you can try to have a weapons program, or you can try to have an economy. But you will not have both. This nation will never allow you to possess a nuclear weapon,” Rubio said.

Rubio, considered a top-tier candidate and in third place when he launched his campaign in April, is now in 7th place according to national average polls conducted by RCP.

The Senator concluded his rally by talking about “making America great with the American dream.”

“This is still a great country,” he said, “but it can be greater. It is being held back by leaders who do not understand the 21st century. They do not understand the opportunities of a new era and are holding us back from being the nation we are destined to be. We are one election away from changing that.”

Watch the 2016 GOP Primary Debates With The PolitiChicks!