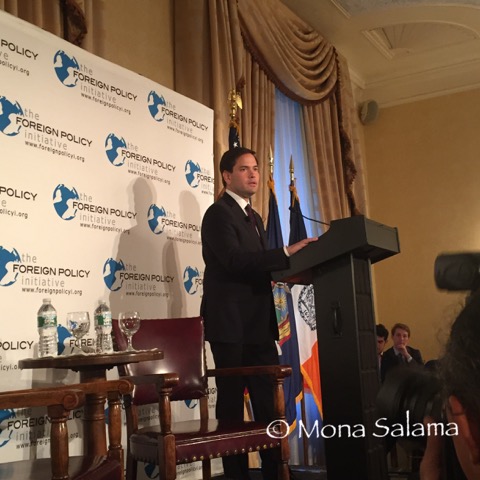 A son of Cuban immigrants, the Senator focused on his remarks on the “dangerous development with Cuba and Iran” as Secretary of State John Kerry makes an arrival to Cuba to celebrate the reopening of the U.S. embassy. At the same time, President Obama is pushing Congress to approve the Iran Deal, a deal Republicans have deeply opposed.

“These two deals represent the convergence of nearly every flawed strategic, moral, and economic notion that has driven President Obama’s foreign policy, and as such are emblematic of so many of the crises he has worsened around the world,” Rubio said, and offered a three-part plan to “roll back President Obama’s deal with both Iran and Cuba.”

On the Cuba reset relations, Rubio slammed the administration decision of excluding Cuban dissidents from the opening ceremony at Havana where the U.S. embassy is located. As president, Rubio pledged to “strive for freedom around the world” by promising to “invite dissidents from Cuba and other freedom fighters around the world, such as Iranian dissidents, to be honored guests at my inauguration as a symbol of solidarity.”

Cuban dissidents have not been invited to the flag-raising ceremony on Friday, which Rubio called a sign of just how backward this policy shift has turned out to be where “this administration sought to make America liked rather than respected by placing politics before policy and adversaries before allies.”

“Cuba’s dissidents fought for decades for the very democratic principles President Obama claims to be advancing through these concessions. Their exclusion from this event has ensured it will be little more than a propaganda rally for the Castro regime,” Rubio said. 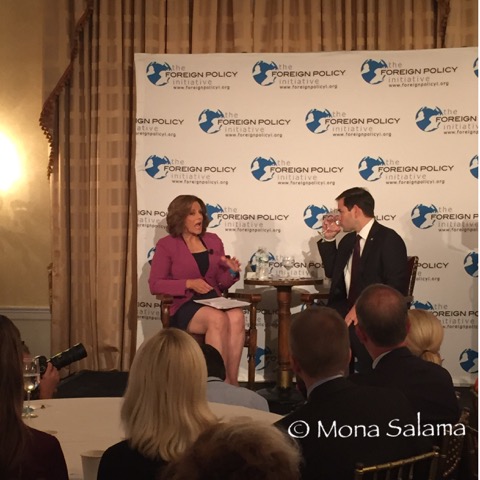 The three point bold plans on Cuba calls for Castor regime to carry out human rights reforms with a choice to give to Castro – “either continue repressing your people and lose the diplomatic relations and benefits provided by President Obama.” The plan also calls for Cuba to restore back into the state sponsor terror list until it stops supporting terrorist organizations and harboring American fugitives.

As for Iran, Rubio vows to “quickly reimpose economic sanctions” beginning on day one. “I will give the mullahs a choice: either you have an economy or have a nuclear program, but you can’t have both,” Rubio said as the vote for the Iran Deal agreement is less than a month away.  President Obama is working to secure enough Democrat votes to prevent Congress from an opposing the deal.  Last week Sen. Chuck Schumer (D-NY) opposed the deal. Obama is arguing Republicans oppose the deal “because they oppose everything” he says or does.

Rubio’s three-point plan for Iran focuses on repairing the damages done to America’s standing in the Middle East and reimposes sanctions on Iran. His policy calls for restoring forces with allies in the Middle East as efforts to rebuild American’s military and ending defense sequestration. As for reimposing sanctions on Iran, Rubio insists a new deal must terminate the nuclear program where “Iran will never be allowed to build a nuclear weapon- not now or a decade from now.”

Rubio, a member of the Senate Foreign Relations Committee, is hoping the focus on advancing his foreign policy vision will help build momentum in his poll numbers.