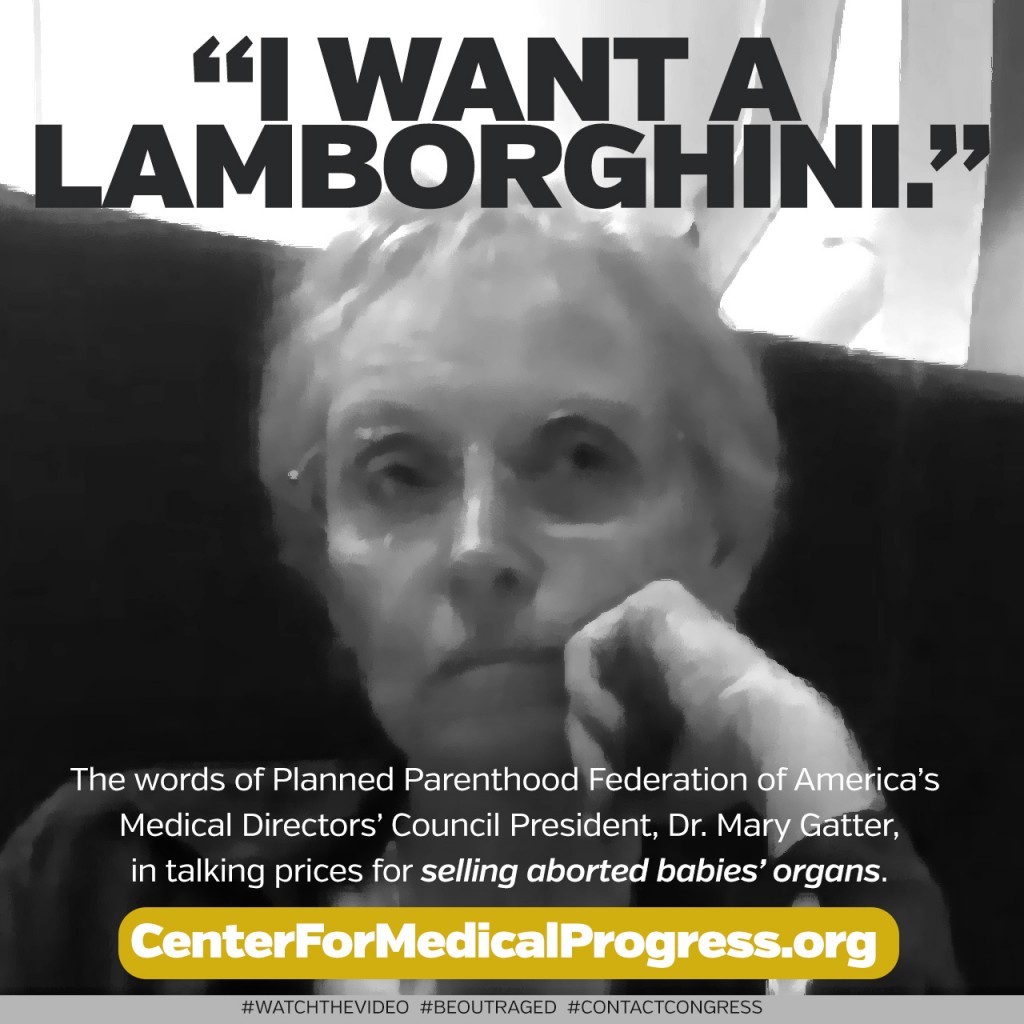 “But if the Watchman sees the sword coming and does not blow the trumpet and the people are not warned, and a sword comes and takes a person from them, he is taken away in his iniquity; but his blood I will require from the watchman’s hand.” ~Ezekiel 33:6

Don’t let the media distract you away from what we all know is going on and has gone on at Planned Parenthood (PP). Don’t let them sweep you up in the latest hysterics over what Trump said to Megyn or what the Chinese did to their currency or even by the White House bathed in rainbows. You can’t do much to affect the Trump vs Kelly feud, you sure can’t influence Chinese currency, and there is very little you can do to influence a lame duck president. But you can do something about innocent babies (aka not tissue) being murdered and having their body parts sold off.

We grew weary of fighting against it over the years. Planned Parenthood with their millions (much of which came from your tax dollars) spent on propaganda that perverts the English language by calling murder a choice and abortion “woman’s health” finally desensitized some of us to the point that we lost our zeal for protecting unborn life. I’ll confess I had fallen into that trap. I’d “moved on” to other issues. Then the undercover videos jarred me out of my stupor like a thunderclap. So please indulge me for a moment while I make a couple of positions clear.

Last week the United States Senate failed in its attempt to protect babies from being “crushed here and crushed there” as Dr. Nucatola casually described in the first undercover video of Planned Parenthood’s macabre tactics. It boggles the mind why Democrats employed the so called “nuclear option” in order to pass Obamacare with a simple majority vote, but Republican leadership didn’t feel the health crisis of infanticide was of adequate importance to do so in this instance. At the very least, could the measure to defund not have been attached to a bill that Democrats were strongly in favor of so that it might pass? Likewise we are told that after their summer break, Republicans will try some procedural maneuvers to stop federal funding to this repugnant organization. At least Republican leaders can salve their conscience secure in the knowledge that they “played fair” and that Senate order has been restored. It is emotionally devastating to consider how many tiny innocent skulls will be crushed in the interim.

And speaking of propaganda, from the floor of the Senate Harry Reid said this: “It is our obligation to protect our wives, our sisters, our daughters and our grand-daughters from the absurd policies of a Republican Party that has lost its moral compass.”

So are we to accept that the mutilation of a baby in the womb is now the moral high ground? What type of moral compass is required for a politician to engage in such a perverse twisting of the meaning of words and the logical application of language? Nancy Pelosi meanwhile called outrage over the videos a “manufactured crisis”. Huh? If altering the morally sketchy late term abortion procedures in order to “harvest” body parts desired by the market is not a crisis, what is? If we cannot agree that what has been seen in these videos is immoral, one must wonder, what can we agree on as a nation? And regarding current Democrat party leadership, do words like “crisis” or “morals” even hold anything resembling their actual meaning anymore?

The most common “defense” I keep seeing of these video’s is that they were “heavily edited”. In the first place the entire videos area readily available on the web. But besides there was no editing of the “crush here, crush there” comment in the first video or the “less crunchy method” comment in the second. Those two comments are all anyone needs to know or hear to know what’s going on at PP. Vapid complaints about editing are typical of the semantic arguments liberals always fall back on.

The Ezekiel passage above is part of the infamous “Watchman’s Passage”. Its message rings clearly through space and time to our modern world. The undercover PP videos have made each of us aware of the sword upon our land. God help us not to let up, help us not to give up on blowing the trumpet, no matter how long it takes, no matter how much we are attacked for doing so, until PP is defunded.

Chris Skates is a columnist and novelist who won the best historical fiction award from the Christian Writers Association for his first novel entitled The Rain: A Story of Noah and the Ark. His second novel, entitled Going Green: For Some It Has Nothing To Do With The Environment, was compared by one critic to Grisham and Clancy and was endorsed by a world renown climatologist and best-selling author. Chris also speaks extensively. He has twenty-one years experience as a Chemist in nuclear and fossil fueled power generation. Much of his work has involved environmental compliance.