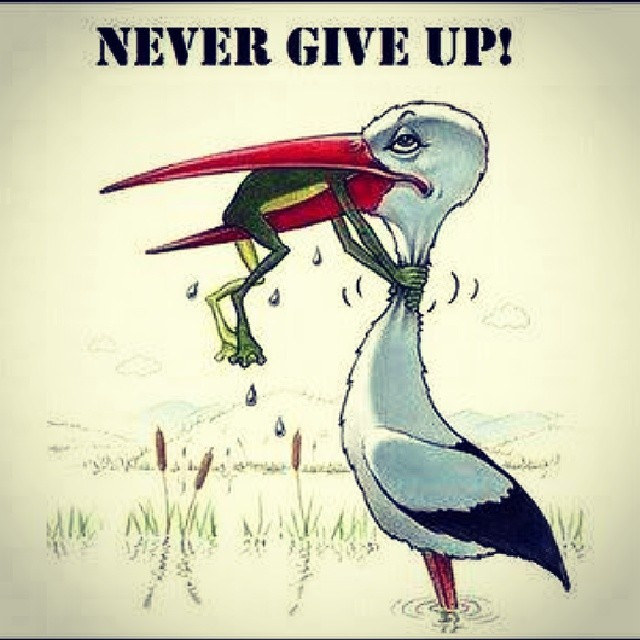 Once upon time, I wandered upon a prize, or so it seemed. It was only a rather roughly drawn poster of a frog and a longlegged stork. They were engaged in a death struggle, each grasping the other by the throat. Of course it was obvious that neither one could afford to let go as both intended harm to the other. Not caring or knowing that neither one could actually win, nor could they actually fight to the death, the struggle would never end and both would eventually die from their own stubbornness. As it had occurred to me, the poster meant more than a silly and foolish determination to win a fruitless battle.

I asked the owner of the poster to sell it to me, and he did, for a dollar. I was currently returning to teaching after a brief period of what was meant to be a retirement to let some frayed nerves heal, and to attempt writing my novel that was trying to find life in my mind. Another round of 20 years teaching unwound with the poster on the walls of whatever room I held classes in. It had become more than a lesson in obvious unsuccessful behavior; in fact quite the opposite. The motto, Never Give Up, became a rallying cry for me, as well as for certain students who had little or no interest in attending classes when they were being called by other voices, other meanings than what might or might not have had anything to do with what called them.

Little things turned into bigger ones when now and then a light came on that had been burnt out; a dream extinguished by a thoughtless remark by a hateful or uncaring adult, perhaps a parent in a broken home, lashing out or even hitting out, and killing a little more of a dream. It showed in the eyes of a young boy or girl, in teen years where everything became bigger than life and popularity, athletic success, good looks all became life itself. In the classes I taught (English grammar and literature, drama, and Spanish), life was on the cusp for those who had no plan, no real concept of life after high school, and being driven by hoplessness was all that some of the kids saw as their future. Some had changed parents and home life until there was no anchor, and no dream. For them, the stork and the frog were real and daily struggles, until it became clear that until one of them let go, no one would ever win. And so, letting go began to become clear when a student stopped seeing him or herself as a loser.

All it took for some, not in a flash of light but in a gradual reckoning, was to conceptualize the way the poster could fit a life yet ahead and it became a lesson for all their days to come. Others had no such issues to deal with, having been perhaps sheltered and coddled to the point of having no concept of life that might not turn out just as their dreams were supposed to.

The lessons were there before their eyes, and mine as I came to know who needed more help than others, who needed a frog or stork to hang onto just to stay in the fight. Often the look in a student’s eyes made me realize whatever lesson was on the schedule could be tossed aside and replaced with what a student needed to hear–perhaps an encouraging example that had meaning, and not dry and lofty words that merely filled a class time. Sometimes we just talked.

Ultimately the poster served as an object of hope in what might lie ahead, to succeed where no hope existed, or as Robert Frost said, “to look back upon with pride, or look forward to with hope.” Never to give up the dream that had perhaps been mocked or belittled by unkind others, or kids who had been handed their future in a neat little package by parents, friends, teachers who put glitter ahead of guts at times.

Every now and then, that boy or girl in the last chair with the notebook full of poems or drawings sometimes came after class, and we talked some more about the real reason Never Give Up meant more than a seemingly hopeless struggle, a silly cartoon on my classroom wall.  And those moments were the reason why I, as a teacher, never gave up.