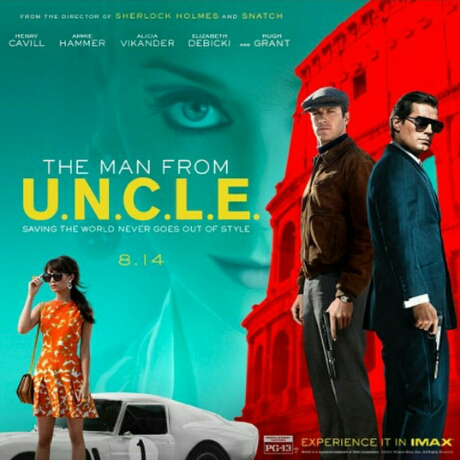 Based on the 1964 television series, “The Man From U.N.C.L.E.” is exciting, slick and wonderfully acted. Guy Ritchie (director, producer and writer) has delivered a comedy, spy thriller film in topnotch form.

In 1963, ex-con turned CIA Agent, Napoleon Solo is assigned to protect and remove Gaby Teller, a car mechanic in Berlin, past the Berlin Wall. Gaby’s estranged father is a Nazi scientist who worked for the US Government and is now being forced to design a private nuclear weapon for a mysterious criminal organization. Gaby’s uncle Rudi may have knowledge of her father’s whereabouts, so the CIA wish to have Gaby go undercover to convince her uncle Rudi to tell her of her fathers whereabouts. In the meantime, Russia as well wants to stop the nuclear weapon and sends agent, Illya Kuryakin to stop Solo from taking Gaby past the Berlin Wall. Solo and Kuryakin fight at odds with each other, till they are forced to unite as both the US and Russia team together to find Gaby’s father.

Henry Cavill is dapper and convincing as Napoleon Solo and maintains the ease and 1960’s cool that actor Robert Vaughn brought to the television series. However Armie Hammer is outstanding as the shy yet lethal Illya Kuryakin whose character is far more developed than the meek David McCallam (Illya) character in the series. Actress Alicia Vikander (Gaby Teller) is excellent although at times her changing persona is a bit confusing and Elizabeth Debicki (Victoria) reminds me of a cold Faye Dunaway in “The Thomas Crown Affair”.

The film is all and all an introduction to a hopeful series of sequels with Cavill and Hammer. Their screen dynamic works in perfection as we see in the beginning of the film as Kuryakin (Hammer) chases Solo (Carvill) through the streets of Berlin, practically stopping Solo’s car from escaping with his bare hands. James Bond may have a run for his “king of cool” title as “The Man from U.N.C.L.E.” comes to town.

A Texan Responds To Being Told His Accent Is 'Offensive'