“When one acts on pity against justice, it is the good whom one punishes for the sake of the evil; when one saves the guilty from suffering, it is the innocent whom one forces to suffer.”-Ayn Rand, Atlas Shrugged, Part 2, Ch. 6

Ayn Rand differed in principle with conservatives regarding the marriage of religion to ethics. In terms of self-government and capitalism, they diverge almost none. I consider her ideals behind Objectivism’s minimalist government superior to Murray Rothbard’s anarcho-capitalist dissolution of the nation. Pro-choice conservatives like Kay Bailey Hutchison or the atheist intellectual George Will must not be rejected for their choice to differ. Conservatism according to Edmund Burke advocates diversity and tolerance, the synthesis of a people’s cultural heritage alongside the classical realism of John Locke assuring there be tolerance for all. As Rand was once a Soviet citizen, she could not but help her experience imprinted her modi operandi. Centuries of Russian Orthodoxy was destroyed, the right to worship denied for 75 years. Rand, however, understood the individual’s natural state. To own property necessitates selfishness, which for Rand was key. Ambition yields the opportunity to acquire wealth, satisfying to each his natural hunger pangs while cultivating the virtues of charity. Rationalism, while secular, is a contemporary corollary to Locke’s core precepts of life, liberty and property. Mankind cannot be forced into an unnatural state. Coercion is antithetical to the state of nature. Civility is engrained by parents in the hearts of their young. The Constitution cannot govern by its hemp and ink alone.

I support School Choice’s ultimate goal to privatize public education. Americans during the early years of the republic were far better educated and in touch with their civic duties compared to now. NAACP founder W.E.B. DuBois, an avowed communist, declared in 1956 the ultimate goal of public education was Marxist indoctrination in his address before the Communist Party of America referring what literature was needed, yet banned by the federal government during the McCarthy trials while discussing another socialist, Eugene V. Debs.

“But this, Debs would say correctly, is not enough. It may come after some outrageous occurrence. However, for the long run and the continuing education of the people, Debs must learn that few reputable publishers today will take any book that deviates from respectable lines of thought as laid down by the National Association of Manufacturers; that no reputable book store will carry hooks advocating or not attacking communism; that public libraries will neither buy nor place hooks of which the FBI does not approve, and that none of our leading literary journals would mention a book by Debs himself should it appear today with a Heavenly imprint. Debs would learn with distress that the tendency apparent in his day of the readers of newspapers and magazines refusing to pay for the full cost of what they read has today sunk to the place where they expect to have their news and literature furnished them free and with pictures and gifts by the purveyors of tobacco, neckties and toothpaste.” 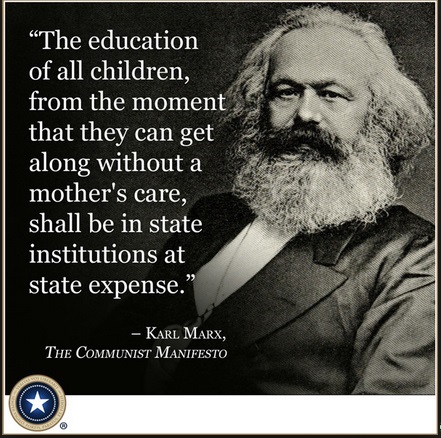 The tenth plank of Karl Marx’s The Communist Manifesto (1848) denies parental rights to choose where their children are educated, much less homeschooled. Democrats oppose School Choice, understanding they have no grounds for mandating a specific curricula nor in how it is applied. If the state cannot acquire sole authority over a nation’s children, it cannot discourage critical thinking. Tomorrow’s adults might then not choose to vote for Democrats. And the Left, always despising liberty and freedom, cannot tolerate alternatives nor competing platforms.

Public education under Marxism is the sole mean to first consolidate and lastly, perpetuate and project total power. Thus the family unit must be dissolved as the preeminent conflicting force, with all traces of historical records erased.

By freedom is meant, under the present bourgeois conditions of production, free trade, free selling and buying.

On what foundation is the present family, the bourgeois family, based? On capital, on private gain. In its completely developed form, this family exists only among the bourgeoisie. But this state of things finds its complement in the practical absence of the family among the proletarians, and in public prostitution.

The bourgeois family will vanish as a matter of course when its complement vanishes, and both will vanish with the vanishing of capital.

To outlaw parental prerogative would set up the final critical step of nationalizing all children for labor exploitation. To do so, Marx advocated for education to dehumanize their souls in order to manufacture organic machines:

Do you charge us with wanting to stop the exploitation of children by their parents? To this crime we plead guilty.

But, you say, we destroy the most hallowed of relations, when we replace home education by social.

And your education! Is not that also social, and determined by the social conditions under which you educate, by the intervention direct or indirect, of society, by means of schools, &c.? The Communists have not invented the intervention of society in education; they do but seek to alter the character of that intervention, and to rescue education from the influence of the ruling class.

The bourgeois clap-trap about the family and education, about the hallowed co-relation of parents and child, becomes all the more disgusting, the more, by the action of Modern Industry, all the family ties among the proletarians are torn asunder, and their children transformed into simple articles of commerce and instruments of labour.

Compulsory public education under present conditions has failed. Choosing new options to address the problem will be the lone breath of fresh air conducive to a successful resuscitation. But the idea of an alternative and its implementation often prove divergent, albeit unilaterally.  For the man daring to dream of things that never were will be found upon the rooster’s crow unable to discuss one ever again.

(VIDEO) Joe Dan Gorman: "The Perks of Being Pathological Liars"

Never Give Up: A Teacher's Motto