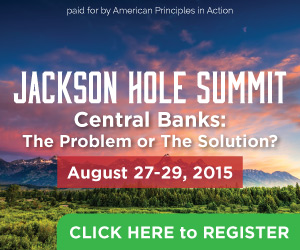 WHY: “The policies of the Federal Reserve are undermining economic growth. Under Obama’s Fed, income inequality has increased dramatically. Our conference serves to highlight conservative, limited government solutions that will allow every American to prosper—not just the wealthy and powerful,” said event organizer Steve Lonegan, Director of Monetary Policy for the American Principles Project.

WHO: More than two dozen high profile speakers including Dr. Benn Steil, PhD, Senior Fellow and Director of International Economics on the Council on Foreign Relations; Jim DeMint, President of the Heritage Foundation; members of both the British Parliament and United States Congress; leading economists; and respected political leaders from all over the ideological spectrum.

The issue—central banking. Is it the problem or is it the solution? An economic conference sponsored by the American Principles Project will address that question with workshops and panel discussions on topics that include:

The conference, billed as the Jackson Hole Summit, is being held opposite of the Federal Reserve System’s annual symposium/retreat.

Former Senator Jim DeMint will be a featured speaker for the summit, scheduled for August 27th-29th. DeMint will be joined by speakers from the British Parliament and the United States Congress as well as leading economists.

“The Federal Reserve System is the central bank of the United States. It was founded by Congress in 1913 to provide the nation with a safer, more flexible, and more stable monetary and financial system. Over the years, its role in banking and the economy has expanded,” states the Fed Web site.

But has it expanded too much? Presidential candidate Rand Paul would say yes. According to Paul on his campaign site, “The Fed is now in every nook and cranny of banking with unprecedented regulatory powers and no Congressional oversight. I believe the Fed should be audited and the regulatory power should be placed back under the control of Congress.” Paul was invited to attend the Jackson Hole Summit, but has not yet been confirmed on the schedule.

As monetary policy makers from around the world gather for the Fed’s annual Jackson Hole retreat, critics at the Jackson Hole Summit will educate citizens on the Fed’s policy as it relates to economic growth.

As of July 15th, the following speakers have been confirmed:

Jeffrey Tucker – Author, “Bit by Bit: How P2P is Freeing the World”

PolitiChicks CEO and Editor-in-Chief Ann-Marie Murrell and I will be there covering events so stay tuned.