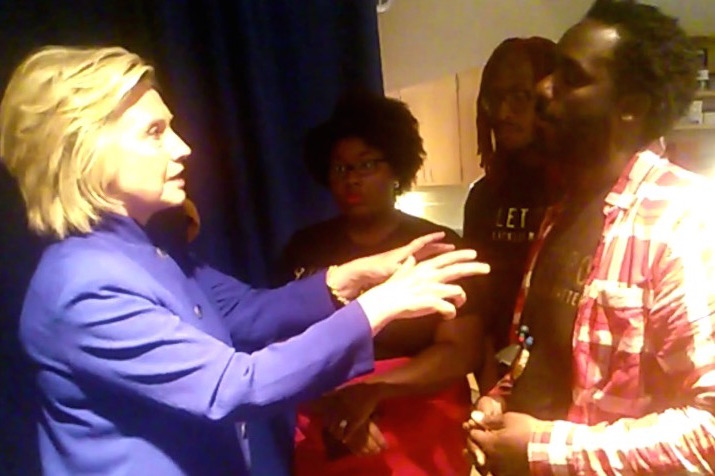 Hillary Clinton’s private meeting on August 11 with “Black Lives Matter” protesters in Keene, New Hampshire in an apparently tense exchange revealed her governing mindset—and it’s not in keeping with the founding documents.

According to DailyCaller, the group, which consisted of five members of the Black Lives Matter Boston branch, was unable to enter the at-capacity site because they arrived late. However, the Clinton’s campaign agreed to a 15-minute meeting afterward. The group insisted that media be excluded from the meeting while they filmed the exchange between Clinton and themselves.

Hillary was asked about her support for the controversial laws that have led to the mass incarceration of blacks in the U.S.

In response, Hillary made said the group has “fair” concerns, but suggestions they create an agenda and initiate a “movement”.

“You’re going to have to come together as a movement and say, ‘Here’s what we want done about it,’” Clinton said, “Because you can get lip service from as many white people as you can pack into Yankee stadium, and say a million more like it who are going to say ‘We get it, We get it, We’re going to be nicer.’ Right?”

The group spokesman held the Clintons accountable for what he perceives is an unjust incarceration of blacks. He pressed her on admitting her mistakes and the consequences that followed.

“Hillary Clinton lobbied lawmakers to back the Violent Crime Control and Law Enforcement Act. Bill Clinton signed the act into law in 1994…The Largest crime bill in history, it provided $9.7 billion in prison funding, from 1992 – 2000, the amount of prisoners in the U.S. increased almost 60%.”

Clinton, clearly agitated, threatened to only speak to whites on the issue, which did caused a shift in the Black Lives Matter’s attitude in the exchange.

We have seen such a magnitude of division and turbulence in this nation that began in the 1960’s and continues even now. The underpinnings of this unrest can be traced to the colleges who then promoted and stoked activism that was not rooted for righteous correction of our ills, but for power and control. It was the era of Saul Alinsky who’s most ardent and passionate followers are now in government, one of whom is Hillary Clinton. Hillary did her senior thesis titled, “There Is Only the Fight . . . “: An Analysis of the Alinsky Model. The subject was the famed radical community organizer Saul Alinsky.

That philosophy lives large in the Democratic Party today, led by those from that era who haves sinced moved the party’s ideology to the radical far left.

Hillary plainly stated she does not believe in changing hearts. The heart is where our values, beliefs—and free will to cooperate, or resist, resides. While it is a difficult process to change hearts, requiring education and persuasion, our nation was founded to embrace governing through the consent of the governed.

The Declaration of Independence states,

We hold these truths to be self-evident, that all men are created equal, that they are endowed by their Creator with certain unalienable Rights, that among these are Life, Liberty and the pursuit of Happiness.–That to secure these rights, Governments are instituted among Men, deriving their just powers from the consent of the governed, –That whenever any Form of Government becomes destructive of these ends, it is the Right of the People to alter or to abolish it, and to institute new Government, laying its foundation on such principles and organizing its powers in such form, as to them shall seem most likely to effect their Safety and Happiness.

Hillary spoke of changing systems in order for the Black Lives Matter group to create the outcomes they desire.

We have a justice system, by jury, to determine the guilt or innocence of those who break the law. Both whites and blacks are tried under this system. If the innocent were convicted, let the evidence be brought forth for retrial.

Government is exactly that. A system. President Obama spoke frequently that he wanted to fundamentally change the United States. You only change something or someone by changing their values and “systems”.

We have a president now that does as he pleases through executive orders, bypassing the other branches of government and willfully ignoring and demanding others to ignore the rule of law, as in the case with the border patrol agents.

Clearly Hillary is that of the same mindset as President Obama, intending to continue America on the path of transforming our system of government, ruling by edict and not by Constitutional assertion or rule of law.

A Chilean Model for Reinventing Social Security and Medicare

Almost 3 Years After Benghazi: Families of Victims Still Have Many Questions