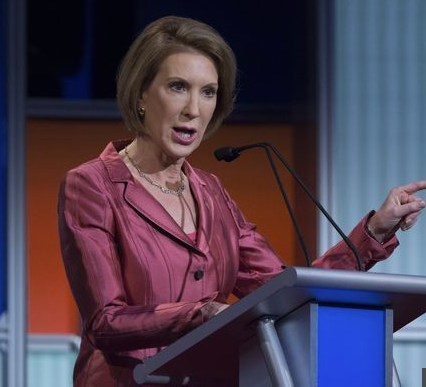 Faced with the possibility of joining the lower-tier debate the second time around, presidential candidate Carly Fiorina and her campaign are going after the Republican National Committee and the next debate media host, CNN.

The former Hewlett-Packard CEO (and only female candidate in the crowded GOP field) has risen in the polls since the first debate hosted by FOX News and Fiorina was the clear winner from her performance in the smaller “kiddie happy hour” debate.

According to Fiorina’s Deputy Campaign Manager Sarah Isgur, “In three national polls since has Florina is between 4th and 7th place and her name ID have risen by double digits.” Real Clear Politics average has Fiorina above 6%. Clearly, the rise in poll numbers in less than a month shows that she will be one of the ten in the prime-time debate stage but that’s not the case.

So why are CNN and the RNC trying to keep Florina off the main stage? CNN, like FOX, will only feature 10 candidates during its prime-time debate. However, its criteria is a bit ridiculous. Unlike FOX, which used the final five polls released before the debate to make its decision, CNN is averaging the results of polls released between July 16 and September 10. From these fourteen polls used for the average, eight of them were conducted before the first debate.

Looking at how CNN is arriving at their decision, they plan to use the average of all polls dating back from mid-July until September 10. Before Fiorina’s widely praised debate performance, her poll numbers had her in 1-2%. After the August 6 debate, Florina numbers have risen with two polls released showing Florina at 5% from Fox News, and 5% from CNN. This places Florina in seventh place at the National Republican poll. CNN plans to average the polls conducted back in July 16th, using nine polls prior to the first debate. After the debate, CNN will be counted right now two according to Fiorina campaign. A handful of new polls is likely to be released before the September 10 deadline, but with Labor Day weekend approaching, the numbers might be in favor of any candidate especially Florina. The average of all the polls so far conducted for CNN average guidelines has Florina at 12th place with an average of 1.7%.

In other words, CNN is using old polls which could keep Florina out of the prime time cut.

“To be clear, if Carly isn’t on the main stage, it will not be because her rise in the polls can’t overcome lower polling from July, but because only two of CNN’s chosen polling companies have released polls at all since the first debate…If the RNC won’t tell CNN to treat post-debate polling consistently with pre-debate polling, they are putting their thumb on the scale and choosing to favor candidates with higher polling for three weeks in July over candidates with measurable momentum in August and September.”

CNN is hosting the second debate in the Reagan Library in California on September 16. Prior to the first debate, CNN released its criteria to its debate rules in May stating it’s set and couldn’t be changed.

“CNN published the criteria for the CNN-Reagan Library debate on May 20,” the spokesperson said. “It will encompass polling data from three weeks prior to the first debate and five weeks following. Federal Election Commission guidelines make it clear that these criteria cannot be changed after they have been published. We believe that our approach is a fair and effective way to deal with the high number of candidates we have ever encountered.”

According to the RNC, they don’t have a final say on how networks make the determinations and Fiorina’s campaign is only trying to “change previously disclosed rules it doesn’t like.” The RNC claims their only role in this process is to make sure the rules are applied fairly and without exception.

Florina calls this criterion and the exclusion “unfair” adding that “the debate rules shows why people are losing trust in the media and frankly are upset in many cases with the RNC.” Her campaign has also called on the RNC to intervene.

“The RNC should ask CNN to treat the polling in July the same as the polling that comes after. Because there were nine polls released in the three weeks before the last debate, one would expect 18 polls released in the six weeks between the two debates. If that does not happen, the polling average of those six weeks should be treated as the equivalent of 18 polls. Assuming the numbers remain consistent with current polling, Carly would easily place in the top 10 for the main debate,” said Isgur Flores

“CNN continues to hide behind their lawyers and seems to think Republican voters won’t notice when they refuse to seat Carly. I hope the RNC will call them out for this.”

Two more polls are set to be released before the September 10th deadline. Quinnipiac will release the results of its new poll on Thursday and Monmouth University poll will be released next week.

For CNN to use poll results prior to the first debate to average in with new poll results after the debate is inadequate and needs to be fixed.  Carly Florina earned her promotion to the main stage debate after her poll numbers rose from 1% to 5%. Her national poll number has her at 7th place out of a crowded field of 17th.

CNN needs to use the polls conducted after the first debate, not prior, when the majority of Americans didn’t even know who Fiorina was.  Let Fiorina debate with the heavy hitters; she’s earned it.

Absolute Proof That satan is a Mother-Hating Pro-Choice Liberal