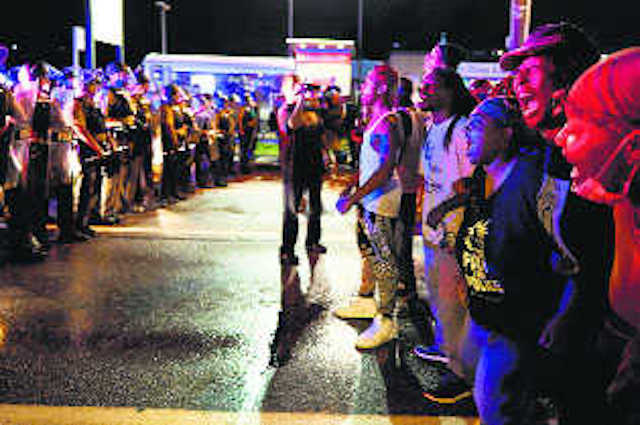 Ferguson. The word has come to mean so much, even though it’s simply the name of the city. A couple of years ago, if you would have mentioned “Ferguson” most would have asked what state the city was in. Now, it has taken on a whole new meaning and today Ferguson has come to mean violence against our men and women in uniform.

Many people will say the violence stems from the death of Michael Brown, but it is about so much more than that. Brown’s death has signified the black community’s disdain for our law enforcement and the #BlackLivesMatter (#BLM) movement, born out of hatred, has shifted from talking about police brutality to being violent against police officers.

Isn’t that ironic?  #BLM wants the police to treat them with “dignity and respect” while they’re throwing frozen water bottles (and anything they can get your hands on) at them.  Do they expect law enforcement to just stand there and take it?

I’ve had an issue with the #BlackLivesMatter movement for months; not because I’m against the original message, but because I’m against the way our law enforcement is being treated. These men and women put on that uniform to protect people every day. They’re there for you if you need help. They show up to incidents most would flee from. And how does our society repay them? By assuming every one of them wants to hurt innocent people is furthest from the truth.

Is police brutality wrong? Absolutely. Are people targeted in certain communities? Without a doubt. But the Ferguson message is being lost in translation. Inciting violence against police officers does nothing but trash your community–and your original message. It doesn’t change the dialogue. If anything, it gives those handful of cops even more reason to use excessive force.

Change will take place when the violence stops and the dialogue starts.

Is Fox News (Officially) Moving to the Political Left?

The Many "Conservative" Bandwagons We Have Jumped On (and Off Of)