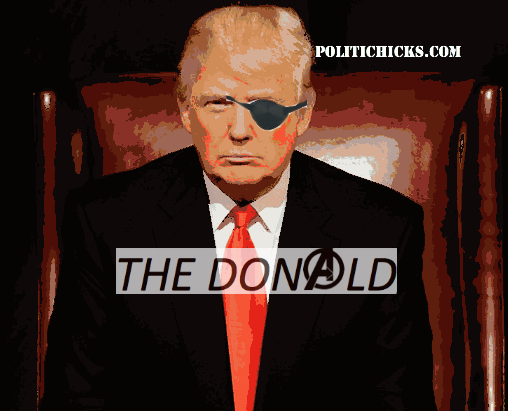 “There was an idea…to bring together a remarkable group of people to see if they could become something more…see if they could work together when we needed them to … to fight the battles we never could….They needed a push.” Nick Fury, The Avengers.

Grateful to be home after the scare of my mother’s broken hip and emergency surgery, I was watching the movie The Avengers last night with my kids to decompress. Then Nick Fury’s lines hit me — they sounded like something Andrew Breitbart would say — and I snapped back to the all-too-real and ongoing battle we Americans are facing to save our country from the evil of progressivism.

Donald Trump may be the political equivalent to Nick Fury — his performance during the recent Fox presidential debate provided the invaluable emotional push towards informing and uniting the American public. Many viewers felt betrayed during the debate, betrayed by a media network promising— but not delivering— a “fair and balanced” opportunity to the GOP presidential candidates. The moderators’ “gotcha” tactics, soft ball questioning of Bush, sniping of Trump and sending Dr. Ben Carson to silently sit at the back of the political bus turned the first GOP debates into a political version of a scripted WWF smackdown. The result? “Fox News made television history, recording record ratings for a non-sports cable broadcast.” This despite the fact that “Fox News had made it virtually impossible to watch the event online.”

It seems that the moderators’ domination of the debate (31% of the on-air speaking time) and treatment of the candidates fired up a conservative base disgusted with the perceived political machination of corporate cronies and media deciding in advance for Jeb Bush, the Common-Core loving, illegal immigration softie, pre-ordained nominee.

Case in point, in 2010 Ann-Marie Murrell, creator of Politichicks, asked a very respected, highly regarded Republican ‘insider’ who he thought the 2012 GOP candidate would be.  Murrell paraphrased his response:  “We love Florida Gov. Jeb Bush but he’s not ready yet.” Ann-Marie was startled, saying she couldn’t imagine another Bush being considered since, at the time, people were still raging against George W. The Insider said, “Nah, that won’t be a problem. We’re working with him and he’ll definitely be ready by 2016.”

I despise the notion that GOP Insiders and so-called “conservative media” will once again pick our candidate. I expect we will soon hear dire warnings from all the wagging talking heads about why we should select someone “who can beat Hillary,” why we must set aside our conservative principles yet again, why we must embrace a mild-mannered moderate or a savvy insider instead of a passionate conservative willing to fight.

Once again, Karl Rove at Fox and pundits elsewhere will lecture us that our principles are second to winning, that to win the White House we must compromise to court the moderates, the undecideds, and the low-information voters, essentially the same boobs who handed Obama a second term. They will ignore the ominous fact that 4 million Republican voters pouted in 2012, refusing to vote for Romney, intentionally dooming our country to four more years of Liberalism Run Amok. Many Republican Senators continue the same stupidity today, doubling down on the compromise-your-principles tact by refusing to engage, funding every executive order Obama wants on the theory that we should hand the Democrats enough rope to hang themselves in 2016. Except the Liberals are adept at avoiding the political noose by turning lots of rope into a Cat’s Cradle with the help of their friends in the media, fair, balanced or otherwise.

While conservatives dream of assigning Hillary a federal prison number to go with her orange pantsuit, even that very satisfying (but unlikely) event will not solve the problem of 2016 and beyond. Conservatives must unite to educate, to persuade, to explain WHY our Constitutional principles of life, liberty and the pursuit of happiness through a limited federal government are fundamentally better that progressivism’s false promises of security, justice and immigration for all through an ever bigger federal government leviathan.

The focus during the primary should be on who can beat the philosophy of Liberalism, whether it’s dolled up in an orange pantsuit or posing as an eloquent empty chair before a teleprompter. And America has some real life political super heroes ready to fight.

Set aside the office of President and Vice-president for the moment. Instead imagine leading GOP candidate serving in a new administration: Carson as Head of Health and Human Services (bye bye Planned Parenthood); Carly Fiorina as Secretary of State (a woman dictating terms to Muslim Iran), Senator Ted Cruz as Head of DOJ; Donald Trump as Head of EPA (tree huggers’ heads exploding); Senator Marco Rubio as Head of Homeland Security (A Hispanic building the fence no less); Governor Walker as Head of DOE (Teachers’ Union heads exploding)’ and Governor Kasich as Treasury Secretary. These GOP contenders would forge a new team, if they could set aside their egos, to become something more to fight the battles America is facing.

Rather than a squabble over an insipid show of hands on pledging support for the GOP nominee, imagine a candidate pledging to harness the other GOP contenders in his/her Administration — Vote for me and you get all of us here on stage. There’s a deal for America — United, America defeats Liberalism.

And that’s where The Donald may figure in. Like The Avengers’ Nick Fury, who deliberately bloodied a pack of collectors’ cards to emotionally galvanize the super heroes, Donald Trump’s theatrical ability to respond to Megyn Kelly sparked viewers’ emotions —something rarely experienced in political debates. People were infuriated and expressed it across social media. And where there is drama, there is attention and focus.

Even more people will tune into the second debate — and that’s a very good thing. The more people see and hear the candidates themselves, instead of the media spin about them, the better informed the voting public will be next November.   Love him or hate him, by making political debate entertaining, The Donald has given Americans a reason to tune in to politics again.

Are 2 Old White Guys Re-Directing the Democrat Party Via the Economy & Racism?