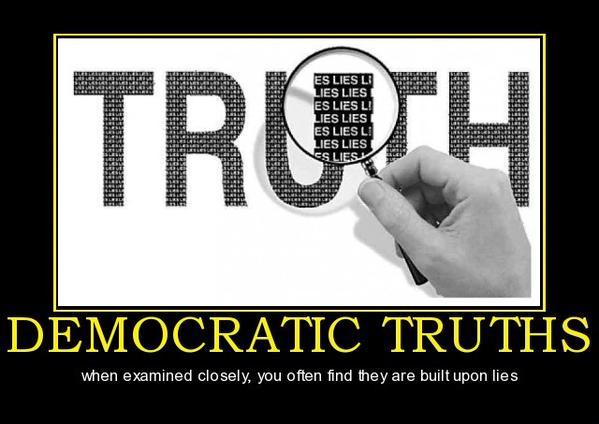 Echoing the response of former British Prime Minister Tony Blair to his immediate predecessor John Major, the “Meme Warfare” waged by the Neo-Marxist Occupy Democrats on Facebook is just “Weak! Weak! Weak!” But why should I spare the rod to spoil a caste of intellectually-vacant, petulant children suffering from “microaggressions”, demanding their cake and to eat mine, too? After all, it was party founder Andrew Jackson — who some thoughtfully claim responsible of a genocide of copious Southeast Indian tribes marching to Oklahoma territory on the “Trail of Tears” — who was nicknamed during his 1828 election campaign what each Democrat of the past century is: a jackass. After all, they are strong enough as mules to insist the democratic process be aborted by seeing dead people, or their zombified supporters who likely do not possess a brain Planned Parenthood’s organ traffickers harvested.

There are a few “Meme Weapons of Mass Delusion” I would love to poke fun at, given not one fact was cited nor accurate even by the federal government’s “lofty” claims. I have no need for Fox News to debunk these. 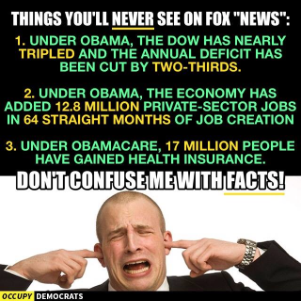 Oh dear — to pin the tail on the donkey! Socialism creeped into the American political-economic framework due to Wall Street, as in Black Tuesday, 1929, under progressive Republican president Herbert Hoover, who undid most of Calvin Coolidge’s (a true conservative) free enterprise model policies by expanding government at record levels in one year, including signing into the law the devastating protectionist Smoot-Hawley Tariff Act in June 1930. But hey! Democrats need a good stock market crash to inject fiat currency into the marketplace, right? Just like George W. Bush was forced to do in 2007 and 2008 once a string of major banks (among which was the Lehman Brothers) filed for bankruptcy. And why did this transpire? Bill Clinton’s policy granting sub prime mortgages to unqualified leasees in 1993, not to mention Alan Greenspan, in the very ill-advised attempt to artificially drive up homeownership, created a real estate bubble which burst once too much debt went unpaid to federally-owned banks Fannie Mae and Freddie Mac, etc. Don’t believe me? Read Dr. Joseph R. Mason’s Drexel University’s LeBow College of Business as well as a senior fellow at the University of Pennsylvania’s Wharton School, own account. Its title, “The National Homeownership Strategy: Partnership in the American Dream” is in short, totally antithetical to what Democrats truly consider its hallmark in managing the economy: how many millions can be crammed onto the welfare payroll, which now include Looney Toon Speedy Gonzalez south of the border or tens of thousands of the undead in Chicago. Today, a record number 35.4 percent receive funding from a “means-tested program”. Including unemployment, Social Security and Medicare, the level rises to 49.5 percent — meaning we’re only six-tenths of percent away from Democrats achieving a desired goal under Marxism, which Rep. Joe Garcia (D-FL) claims his party already implemented. By 1999, Clinton had America back in recession… while Curly of the Three Stooges [evidently] lost a hell of a lot of weight.

A History of Democrats and Warfare – Iran and Iraq 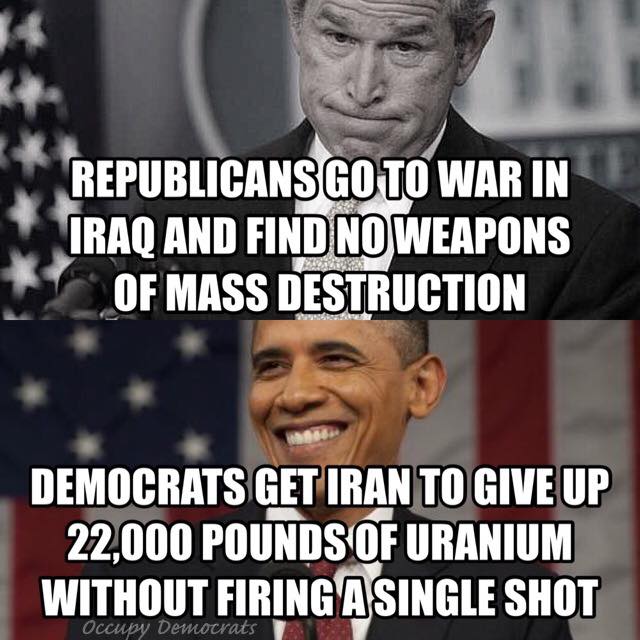 Again, Occupy Democrats failed to read its own liberal media piece “The Secret Casualties of Iraq’s Chemical Weapons”, as the New York Times slammed the very purpose it railed against George W. Bush, which Democrats — including Hillary Clinton — overwhelming voted in support based on intelligence continually amassed since the Clinton presidency. Ironically, it failed to acknowledge the actual request for authorization by President Bush fully-citing Bill Clinton’s own campaign of airstrikes over Iraq at the time of the Monica Lewinsky scandal. [Cue Mitch Ryder and the Detroit Wheels.]

Why else would Obama hand to Iran Uranium the Russians have provided since 1979, including nuclear scientists and engineers, further technology, while enjoying exclusive, unfettered access to Tehran’s current program? Why else indeed but for the West to punt the entire region of Central Asia to Moscow and China, the former of course serving as the biggest winner of the deal according to the two following portions of the Iran Deal provided approximately three weeks ago? Again, the New York Times reported this November 11, 2014 just months after Putin and Chinese President Xi Jinping signed a lucrative $400 billion natural gas pipeline expanding 1,600 miles of Central Asia from Shanghai to Omsk, reported by the BBC. And Iran has had nukes for at least a generation.

Saving face while lying about winning a diplomatic showdown predetermined in 2014 is very Democrat-like. The Leftist media already blames George W. Bush and Ronald Reagan for Iran’s rise, but not Jimmy Carter, who aided Khomeini’s rise to power. After all, Obama, like most Americans, understands Reagan was the most effective president on record. Perhaps his communication skills,  how America benefitted under conservative prosperity might explain how he attempts to crash where we conservatives party. After all, it is always more fun to avoid a Democrat-mandated Nuremberg rally.

Socialism? Job Creation? Access to Healthcare? Where Did the Labor Force Disappear to? 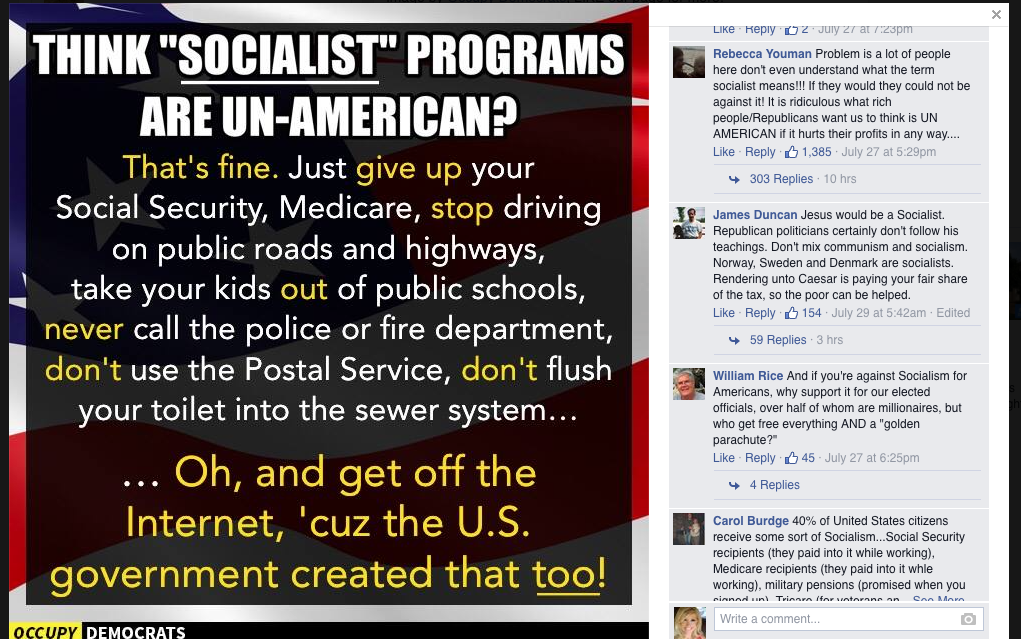 This is the biggest laugher of all Democrat claims to success under socialism. Here, Occupy Democrats’ last “Meme Weapon of Mass Delusion” admit unabashedly to being socialists.

So socialism is un-American? When did any Democrat in 2015 consider themselves proud to be Americans given not one believes in the right to choice unless, like in the Qur’an, one either voluntarily submits or can be killed (or some other abrogated form of “forced freedom”)? I did not ask to be forced to pay into a Social Security pension scheduled to be bankrupt per the SSA in 2034. Our government has constructed roads since its establishment, while the Postal Service has been privatized since 1971! Contrary to Comrade Obama, I see taxation as legalized theft I am not permitted to avoid. And by the way, not every city has sewers circulating their excrement.

Medicare: People have less access to health care today due to long wait periods and Obamacare closing hospitals, killing the jobs of medical officials. Third, there is a net loss in the number of Americans with health insurance, private sector investment and a declining ability to afford any at all. U.S. News and World Report just reported what Obamacare will cost in both jobs and lives, claiming the following as part of a study. —

For this report, researchers surveyed 3,887 people who used online marketplaces to buy health insurance. The analysis did not distinguish between people who used state exchanges and those who used the federal website, HealthCare.gov.

Despite having insurance coverage that some may not have had before, the survey revealed costs are still a major concern for exchange customers. Results showed only 24 percent felt they could get affordable care when they needed it, and just 16 percent felt financially prepared to handle future health care costs. And 1 in 3 reported they had difficulty paying for out-of-pocket expenses when enrolled in a marketplace plan for a full year. 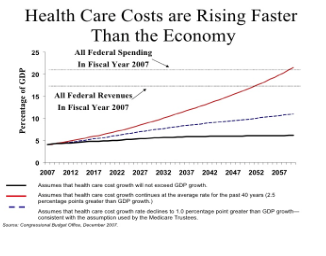 As for any form of socialized medicine providing easy, affordable access to medical care unabated? It might explain why the discrepancy between actual medical professionals and clerical staff exist, where the latter is necessary just to make sense of bureaucratic red tape. And of course, socialized medicine in place since “Little Brains” Johnson’s Great Society programs continue seeing hyperinflated costs in comparison to the rest of the economy due to massive nationalization and growth-repressive regulations.

In 2013, Hit Consultant concluded the average Briton under the National Health Service is 45 percent more likely to die than in the U.S., a goal Democrats would love to surpass. Sir Brian Jarman, initially shocked by the study, disclosed to Britain’s Channel 4 News the following indictment of socialized medicine:

“I expected us to do well and was very surprised when we didn’t. If you go to the States, doctors can talk about problems, nurses can raise problems and listen to patient complaints. We have a system whereby for written hospital complaints only one in 375 is actually formally investigated. That is absolutely appalling.”

But hey, we can’t all win at life’s lottery according to Jonathan Gruber. Not everyone is a Democrat and therefore permitted medical treatment as politically-expedient losses. And I wasn’t stupid enough to vote for Obama twice, nor so disingenuous as to discredit British MIT scientist Tim Berners-Lee, who invented the World Wide Web in 1989. So sorry fellas. No casino economics on Wall Street for me like the Democrats’ ideological puppetmaster, twice-bitten China.

Fox News Announces GOP Debate Lineup: Who's IN, Who's OUT

Democrat vs Socialist: DNC Chair STILL Can’t Explain the Difference (and here is the answer!)