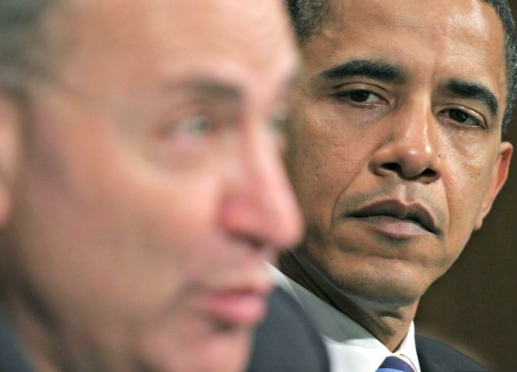 While some on Capitol Hill are still weighing options about Obama’s Iranian Nuke deal, one of the latest to oppose the deal is New York Democratic Senator Chuck Schumer. A week ago in his released statement Schumer said that he had spent the last three weeks “carefully studying the Joint Comprehensive Plan of Action, reading and re-reading the agreement and its annexes, questioning dozens of proponents and opponents, and seeking answers to questions that go beyond the text of the agreement but will have real consequences that must be considered.”

“To me, the very real risk that Iran will not moderate and will, instead, use the agreement to pursue its nefarious goals is too great… Therefore, I will vote to disapprove the agreement, not because I believe war is a viable or desirable option, nor to challenge the path of diplomacy. It is because I believe Iran will not change, and under this agreement it will be able to achieve its dual goals of eliminating sanctions while ultimately retaining its nuclear and non-nuclear power. Better to keep U.S. sanctions in place, strengthen them, enforce secondary sanctions on other nations, and pursue the hard-trodden path of diplomacy once more, difficult as it may be.”

It seems as if Sen. Schumer doesn’t take his vote lightly. Schumer is one of about a dozen Democrat Senators who have come out against the deal. Congress is now about half way into the 60 day review period to decide whether or not to support the agreement which will allow $150 billion to flood back into Iran’s coffers.

Since Senator Schumer came out against the bill, progressives have begun attacking him in a vicious campaign which borders on anti-Semitism and claiming he is a traitor for being more loyal to Israel than the United States.

It would seem that progressives don’t believe Iranians when they chant “death to Israel, death to America” but they have no problem believing Iranians will be peaceful with nukes.

Last month, Obama held a presser in which he claimed that “the United States will maintain our own sanctions related to Iran’s support for terrorism, its ballistic missile program, and its human rights violations. And we’ll continue our unprecedented security cooperation with Israel and continue to deepen our partnerships with the Gulf States.”

This is the same Commander who had been known by US authorities to be in Iraq last year when American Forces were training Iraqis to fight against ISIS, even though there were sanctions against him from entering Iraq. According to reports, Soleimani also met with Hezbollah chief Nasrallah in February this year, following an air strike that killed several operatives in Syria.

This is the same whom I wrote about last year when he threatened Israel and the U.S. saying, “We can destroy every spot which is under the Zionist regime’s control with any volume of fire power (that we want) right from here…” when speaking at a conference in Tehran in March 2014 which was around the same time the Nuke talks were going on in Vienna.

He went on then to say that US and Israeli officials are “totally incapable” of taking any military action against Iran, but at the same time affirmed that any attempts made would compel Iran to consider their options, “Lots of options are on the table for Iran, and they will receive crushing responses, one of which would be elimination of the Zionist regime,” he warned.

Qassem Soleimani was designated a terrorist and sanctioned by the U.S. in 2005 as a supporter of terrorism. In 2007 the US levied sanctions against Iran including the Islamic Revolutionary Guard Corps (IRGC) which encompasses the Iranian Ground Forces, Air Force, Navy, Basij militia, and Quds Special Forces. In the fall of 2011, the U.S. Treasury Department tied Soleimani to the failed Iranian plot to assassinate the Saudi ambassador to the United States while he was in Washington, D.C.

Obama, Kerry and others claim that the sanctions will stay in place against Soleimani and deny that any of the billions of dollars flowing back into Iran will get into his hands. How can they make such claims when the guy who has been sanctioned and barred by the US and UN has been travelling openly and freely all around the world for years?

As of this writing it is being reported that the White House is blocking the release of a Pentagon risk assessment of Russia’s violation of the 1987 Intermediate-range Nuclear Forces Treaty, and also while Russia has docked ships in Iran’s Anzali port and will be conducting joint naval exercises with Iranian forces.

Iran and Russia have been cozy for years, and at a time when Obama is pushing a dangerous deal with Iran even while supposedly keeping a red line against Russia, it doesn’t make sense for the US to pass such a dangerous bill giving Iran such a nuclear advantage by unfreezing billions of dollars.

How soon people forget the ties between American forces deaths in Iraq and Al Quds as shortly after the fall of Saddam Hussein, the Quds Force mobilized and trained Shiite militias within Iraq for the sole purpose of killing Americans. In an extensive 2013 article about Soleimani in the New Yorker, General McChrystal, the head of the Joint Special Operations Command at the time explained about E.F.P.s, which are explosively formed projectiles. They were a sophisticated form of roadside bomb used in Iraq which was able to penetrate American armor. They were estimated to have killed hundreds of Americans. E.F.P.s came only from one place. Iran.

The US Intelligence Community knew without a doubt that Soleimani’s forces in Iraq were trained, equipped, financed and directed by him to kill American forces. In 2011, an Iranian newspaper published an editorial boasting, “It is undeniable that the Quds Force – and General Qassem Soleimani – has played the most significant role in cutting down to size the U.S. war machine in the Middle East.”

Those who fought in Iraq haven’t forgotten the life changing injuries and deaths of their fellow troops at the hands of Iran. Veterans from the Iraq war are coming out in strong opposition to Obama’s plan as well. In one of their first ads, a retired Staff Sergeant who was injured by an Iranian bomb in Iraq in 2005 says, “A vote for this deal means more money for Iranian terrorism. What do you think they are going to do when they get more money?”

The Veterans’ campaign doesn’t focus much on the nuclear part of the deal but on the $100 billion in sanctions relief; because Iran may use the money to increase its terrorist activities all over the Middle East.

There is so much evidence showing the links between the Shia Al Quds Soleimani, and Iranian leadership with Sunni terrorist groups including the Muslim Brotherhood and Al Qaida, that there is no way Obama, Kerry or anyone else can stick to their promise that money will not go to terrorist activities. Even their claim of the snap or push back is ridiculous because once they refreeze any assets again it will happen only after money has been spent on terrorist activities or weapons, after the fact. Obama and his administration are pushing a deal with Iran which had been designated as a State sponsor of terror, and who have proxies in wider terrorist camps.

I don’t often agree with Senator Schumer, but on this vote I back him 1000 percent. With well- documented ties Iran and their forces to terrorism, and Obama’s willingness to make this deal happen, even threatening to veto should it not pass, I have to ask, who is the traitor?