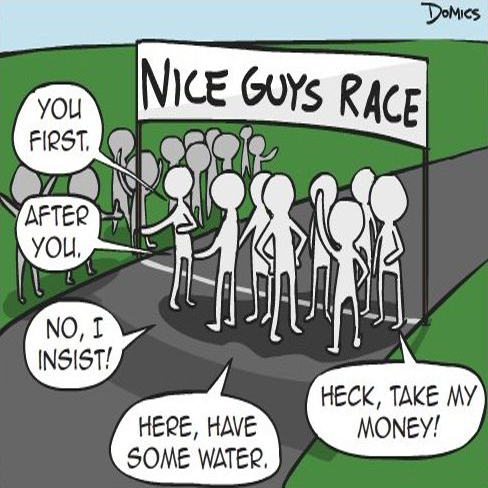 There is nothing that corrupts conservatives quite as much as the need to be nice.

Conservatives are natural optimists who see the world as being basically a nice place. They are nice because they think that the world is nice. That worldview is not reciprocated by the other side.

The left is convinced that the world is an evil place, that people are basically terrible and that they are the only thing standing between us and the return of human slavery.

It’s no wonder that liberals are so nasty.

In political wars, conservatives have to force themselves to be nasty and liberals have to force themselves to be nice. Media control flips the script so that the average person is under the impression, without having listened to either one, that Rush Limbaugh screeches hate at the top of his lungs while Jon Stewart is a fun-loving entertainer, when really it’s the other way around.

But the media excels at pumping out one core message; liberals are good people and conservatives are bad people. The details are usually forgettable and buried in a thousand contextualized stories, but the message permeates everything. And even when the public doesn’t buy it, conservatives do.

No one wants to be thought of as a villain and when the media manufactures a crisis, particularly when a whirlwind of manufactured stories begins to spin around some tragedy, some conservatives are seduced into trying to be nice guys and girls.

They won’t surrender their main principles. Of course not. They’ll just make some kind of gesture. Call for fairness. Find common ground with the other side.

Religious leaders rationalize that they’ll convert more of the heathen by showing respect for the other side. Political leaders give in to the urging of their kids and their cocktail party milieu. And too many in the rank and file robotically repeat media talking points no matter how they distrust the media.

And the left wins again.

If there’s one thing that conservatives need to cure themselves of it’s a slavish desire to be nice. Those who give in to it are lost.

Liberals don’t suffer from a niceness crisis. They don’t find common ground with us. They don’t worry that somewhere out there someone dislikes them.

This is really why there is no conservative party. Eventually all those passionate conservatives we send up and have such high hopes for give in to the questions being hurled at them by the media, by their compatriots in government town asking them what they’re going to do about fake crisis No. 3.

And eventually they try to find common ground. And they lose and we lose.

It’s not just about policy. This is a conflict that takes place in mental and moral spaces. Before the policy, comes the worldview. The left will lose political battles rather than give an inch on its worldview. They view liberals who retreat on any issue as traitors and punish them. Conservatives lose political battles because they open up gaps in their worldview, they make mental and moral concessions, and once they’ve done that, losing the policy battle is a foregone conclusion.

Winning requires an uncompromised worldview. Lose that and every battle becomes a frenzied clash followed by a strategic withdrawal to the next crucial issue. ObamaCare. Iran. Planned Parenthood. Don’t worry, one of these days we’ll fight one to the end. Just not this one. Or the next one.

When you have a compromised worldview, then you stand for nothing.

The Republican Party has ten thousand men and women who believe in nothing, but are eager to discuss policy. Their policy ends up being liberal because there is no firewall of conviction.

Conviction is the difference between victory and defeat. Strategy wins battles, but without staying power, the battles never add up to win a war. A president is elected. The Republicans take the Senate. There are Supreme Court justices and a few legal victories. But none of it has any staying power because there is no larger worldview behind it that is uncompromisingly committed to a goal.

Eventually everyone gets distracted and goes home. That’s how those past “conservative” victories ended.

Conservatives are naturally nice. When the world seems to turn against them, they often become embittered. The happy medium of the happy warrior is a difficult one because it requires remaining centered in the ‘nice world’, the world of families and neighborhoods, of a glorious past that can be used to build a glorious future, while doing battle in the twisted media landscape of the left.

The internet has made that battle harder to fight, but it has also made it easier to find likeminded people to fight it with.

The left thrives on breaking down social connections and isolating people. That is what is behind its war on the family. Into those cracks, it embeds its cultural and academic programming. It models adult life for children and turns adults into children with fake models of life. It manipulates empathy for its political causes. It convinces good people to empathize with evil while disdaining other good people.

Our battle is not merely external, but internal. Totalitarian movements are not just defeated in the ruins of fallen statues and burning palaces, but in the resistance to their messaging in our own minds. By purifying our convictions, we immunize ourselves to tyranny. We become like those great men and women we admired throughout history whose resistance called on an impregnable moral power.

We become firmed in conviction by not giving in to intellectual or emotional manipulation. We do this by rejecting any moral authority on the left whatsoever. We disregard whether the left considers us nice. We cease trying to find common ground with a movement that wants to enslave us.

When we close that door, the left loses its greatest manipulative weapon.

The left claims the media power to decide who is cool, who is nice, who is good and who is bad, who is laughable and contemptible, who is a bigot and who is a saint. It backs up this power with a million voices echoing at every range. When we cease to pay any emotional or moral regard to this pitcher plant, we take the first step toward becoming a movement of conviction rather than convenience.

It sounds easy, but it’s a lot harder than you think.

Imagine the next sob story on the news. The one that is targeted directly at your demographic. Ask yourself what its agenda is. What does it really hope to achieve. It’s not that hard, but not even 1 percent of Republican voters, the same ones who poll as distrusting the media, will do that.

And of those who do, far too many will still be influenced by it.

The left has been able to keep winning because it has the conviction to set the agenda and too many conservatives allow themselves to be influenced by it. And then a think tank will roll out a “conservative” solution to climate change, illegal alien amnesty or drug policy reform.

And then the left wins.

If we want to be where the left is today, we will need some of that same determination. We will need to realize that we will not win by being nice, but by refusing to let the left’s definition of niceness get a foothold in our minds or our souls.

At Least Michelle Obama Isn't Running for Office. Yet.

Planned Parenthood Was Anti-Abortion Until 1970s. What Happened?