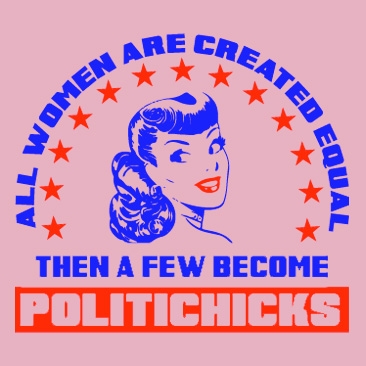 All of our readers are fully aware that PolitiChicks is a conservative national website so of course anything PolitiChicks-related has to be as well.  So when PolitiChicks CEO Ann-Marie Murrell was looking for a vendor to create our PolitiChicks line of t-shirts, ultimately there was only one choice:  Gary from Five-Star Printwear (website partycrashertshirts.com).  Gary is a strong conservative Republican and has been in business since 1993 with an online web store called Party Crasher T-Shirts.  I spoke to Gary about his t-shirt line and his political involvement as we gear up for the 2016 elections.

MS: What motivated you to start this business?

Gary: We print t-shirts for private individuals but we also print t-shirts for several of the larger online t-shirt sites. We’ve printed well over a million shirts. And we saw that they were doing well and figured why not open our own website? We wanted to do something we were passionate about so we chose political and patriotic designs. We wanted to celebrate America but also wanted to make t-shirts that might make people stop and think. If they made people angry we hoped that they would get involved.

MS:  Tell us about your site, Partycrashers.com.

Gary: Partycrashertshirts.com is our online home. We make t-shirts about all of the things we are passionate about. We are passionate about our founding fathers and American exceptionalism. We are passionate about politics and our support for politicians who uphold traditional family values and uphold the Constitution. We are proud people of faith. We have partenered with other websites that share our core values. Websites like IntellectualFroglegs.com, Moonbattery.com, AngryWhiteDude.com, and obviously saving the best for last, PolitiChicks.com. We do all of our own printing and embroidery at our shop in Phoenix, AZ. We create all our designs.

MS:  What are you best known for and why?

Gary:   One thing that always amuses me is people always say, “I can’t believe how high the quality is in your t-shirts!”  And I want to shout, “Why wouldn’t they be! We’re professional t-shirt printers!” But I guess it’s because people have gotten used to inferior products. We screenprint each shirt by hand in our shop in Phoenix. Each design is heat cured so they wear like iron. I have shirts that are 10 years old that look like new. We use a really high quality 100% cotton t-shirt. A lot of people these days use DTG (direct to garment) printing which is basically like running your t-shirt through your inkjet printer. The quality of the print is just not the same.   As far as what kind of designs we are best known for? We have some really beautiful, full color designs based on those handpainted World War II posters. I love that we have a lot of shirts with inspirational quotes from our founding fathers. We also try to have funny, topical t-shirts. 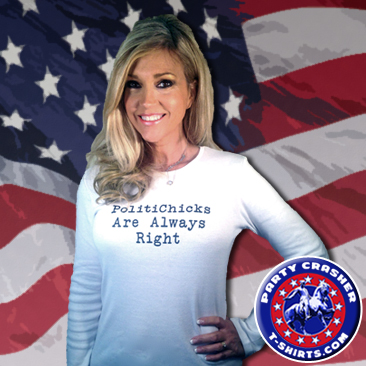 MS:  How did you get involved with PolitiChicks?

Gary:  I’m a big fan of PolitiChicks and so has my wife. I think my wife started showing me Politichicks about a year or two ago. She kept getting articles forwarded to her by her friends. What you have to understand is that I went to college but I wasn’t an exceptional student by any means. My wife on the other hand has a Masters degree in Communications, my mom has a Masters degree in Education. So I’m surrounded by beautiful women who are all much smarter than me. So clearly that’s something I enjoy. It’s a great site with very thoughtful articles about what is going on in America. There’s a strong emphasis on faith and family which are both very important to me.

I simply contacted Ann-Marie through the contact information on the site. PolitiChicks was always a site I wanted to work with. 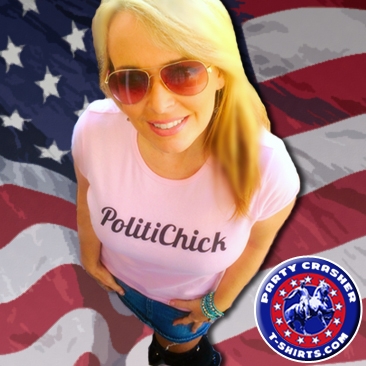 MS:  How are you politically involved?

Gary: I’m active in a lot of online communities. I also like to reach out to my friends who might need some educating. I’m very good at bringing people over from the dark side so to speak.

MS:  How do you feel about the past 6 years under the Obama presidency?

Gary: I think Obama is arrogant, incompetent and insincere which is a dangerous combination. This is a man who went to Jeremiah Wright’s church for twenty years and had talked about the man being a spiritual mentor. A man who was openly anti-white, anti-Semitic, and anti-American. So, of course Obama’s only too happy to throw him under the bus. Obama doesn’t care about American’s dying in Boston bombing or Benghazi but he’s only too happy to insert himself in Mike Brown or Eric Garner cases instead of letting local authorities handle it. And he’s crushed the economy with his economic policies and Obamacare. 1 in 5 Americans is on food stamps in this country. He helped out his union cronies at Chrysler and GE, meanwhile American taxpayers have lost 25 billion dollars on the deal.

MS:  Has your business been affect by Obamacare?

Gary: Yes. We have fewer than 20 employees and when we went to renew our health insurance package we found out it was no longer being offered. The alternative we were offered had a higher premium and a higher out of pocket. That was a direct result of Obamacare. We’re working twice as hard to keep everyone on and we’re not making more money.

MS:  Who is your favorite Republican candidate and why?

Gary: I like Ted Cruz, I like Ben Carson, and Scott Walker. I like smart, thoughtful people. Favorite today would have to be Scott Walker. He’s very principled. He’s willing to stand up for what he believes in. They’ve taken a hard look into his past and there are no skeletons. Which is important in these muckraking elections.

MS:  What are you looking for in a candidate? Experience, mouthpiece, or one that can definitely beat Hillary Clinton?

Gary: Of course I want someone who can beat Hillary Clinton but I have to maintain my principles. I’m going to support the candidate I most believe in. Now if they don’t make it through the primary than it’s going to be whoever is not Hillary Clinton. There’s no one on the Republican side I distrust more than her.

MS:  What did you think about the 1st debate and who impressed you? 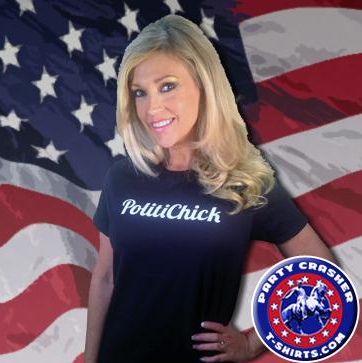 Gary: I was really impressed by Huckabee and Carson. And I have mixed feelings about Trump. In some ways he’s just like us. He wants to make you laugh and he wants to make you think. And if I was voting for Emperor I think he might be a good fit. But I just have real concerns about his ability to work with anyone who doesn’t completely agree with him. And while I admire conviction, he has to work with other people and other countries.

MS:  Any final words you want to share with our readers?

In turn, Gary would like to reward our PolitiChicks readers by giving you 20% off your entire order with Party Crasher T-shirts! Just use the coupon code: CHICKSRULE

Movie Review: “Fantastic Four” A Fantastic Bore (1 Out of 5 Stars)

A Hand Up or a Hand Out?