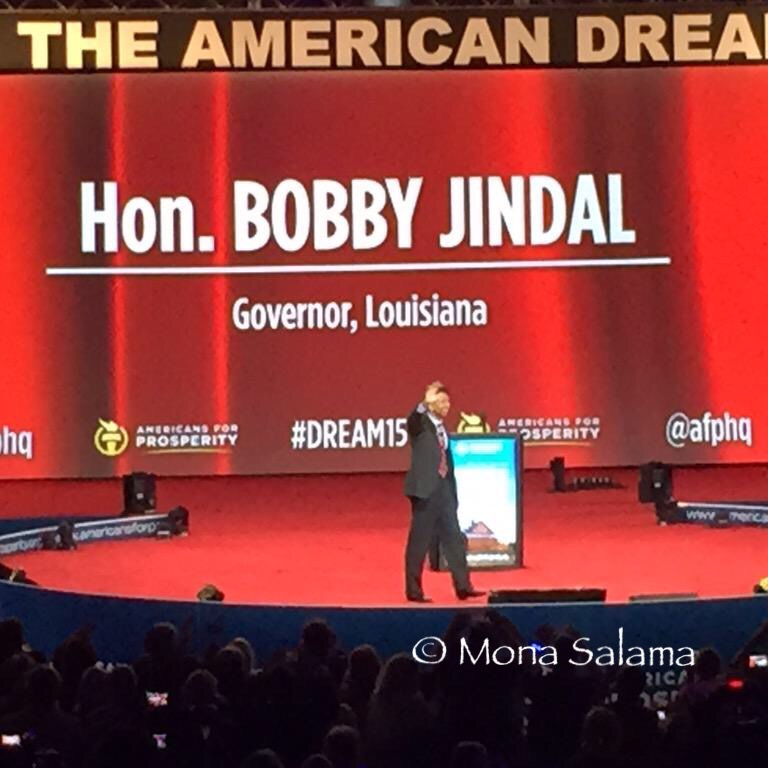 Louisiana Governor Bobby Jindal was the last speaker at Day One of Americans for Prosperity’s Defending the Dream Summit in Columbus, Ohio.  When he ended, the crowd was on its feet to the point that many ran to shake the governor’s hand while he was still on the stage.

In one of the most fiery speech ever given by the Louisiana Governor, Jindal’s 25-minute long speech took swings at his presidential rival opponents, Planned Parenthood, and the issue of immigration – all receiving thunderous applause from the summit audience.

“We have a bunch of senators running — nobody in D.C. has ever cut government spending,” Jindal said. “Look, they give great speeches, they filibuster, and I am proud they have large bladders, but that is not enough.”

Jindal argued his executive experienced as governor and his proven track record is what is needed to take on the political establishment in Washington to cut the size of government. “I don’t have a famous last name, my daddy wasn’t president, I don’t have my own reality TV show, I’m not the best speaker, and I’m not the best-looking candidate. But I am the candidate best prepared to hit the ground running on that first day. Our next commander in chief will be across the table from Putin, from an ayatollah. He better not need a TelePrompTer,” Jindal said.

Recently, Jindal has been critical of his fellow running mate, Governor Scott Walker, on his newly released health care plan.  Walker wants to repeal and replace Obamacare with “recycled proposals” Republicans had put forth but never could pass in the divided Congress. Jindal calls this plan “another entitlement program”:

“Scott Walker’s plan does create a new federal entitlement, and it does provide universal coverage with a guarantee of government coverage for everyone. His plan would likely cost over one Trillion dollars, and he does not indicate how he would pay for it, which, of course, is the Washington way.”

Jindal also took swings at Governor Jeb Bush, mentioning his name by arguing that Conservatives should not hide their views just to get likes by the left:

“We have to stand up for our principles, we have to stop being intimidated and bullied by the left. You’ve heard Jeb Bush say that we have to be willing to lose the primary in order to win the general election. Let me translate that into English for you – that is the establishment in Washington is telling us we have to hide our conservative views in order to try to get the left and the media to like you. I’m here to tell you folks that never work. If we try that again, we will lose again, and we will deserve to lose again.”

On the issue of Planned Parenthood, Jindal was outraged by the recent videos released of the abortion provider’s illegal sale of aborted “fetal tissue”.

“I’m here to tell you Planned Parenthood should not get another dime of our taxpayer dollars,” he said. In response to his recent Medicaid cuts, abortion rights activists yesterday protested outside the governor mansion, but the governor countered the demonstrators by setting up large screens displaying the controversial uncovered videos. “They came to protest at my house yesterday, and so we set up some nice video screens for them so they could watch those videos uncovered,” Jindal said.

The governor kicked off his speech telling the summit crowd of his parents coming to America legally. From there, Jindal delivered a hardline stance on immigration:

Jindal detailed his “Partner in Crime” proposal plan of criminalizing Sanctuary Cities mayors by charging them as accessories to crimes committed by undocumented workers.

Change Is On the Horizon in Arizona: Interview with Kelli Ward, Running Against John McCain

Ted Cruz Has Strong Words About His "First Day As President"