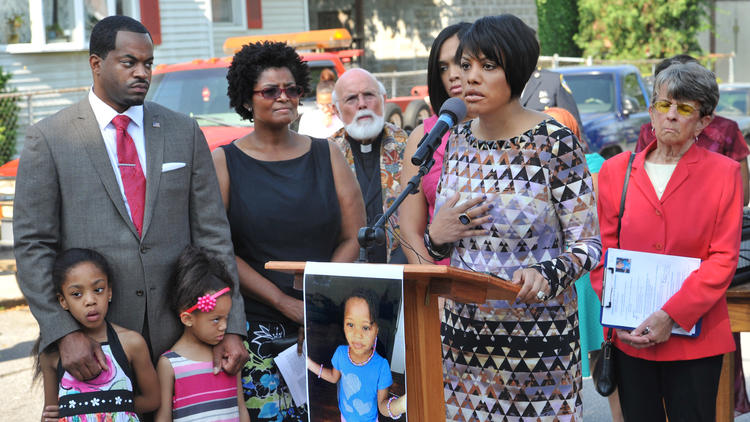 Mayor Stephanie Rawlings-Blake still doesn’t get it. As we all know, actions speak louder than words, and in this case, tears. As usual Baltimore City’s Mayor failed to take the lead in yet another murder case. Over a year ago, three year old McKenzie Elliott Way was killed by a stray bullet during a drive-by shooting while standing on her porch.

Metro Crime Stoppers is a nonprofit in Baltimore City tasked with raising reward money in hopes a witness will come forward with a lead in order to solve a case. Metro Crime Stoppers was able to produce their standard of $2,000 for McKenzie Elliott, but has hopes the reward offer will increase with the support of Baltimore officials.

On May 11, 2015 Metro Crime Stoppers, along with City Councilwoman, Mary Pat Clarke, and roughly twenty officials urged the private sector to assist by stating, “We are asking today for money, deep-in-our-pockets money, to help us increase the reward for the arrest of someone in the case of McKenzie Elliott.” Though, it seems even the Baltimore officials barely heard Ms. Clarke’s plea a few feet away.

Including the $2,000 fronted by MCS, the total raised, which was announced on “Remembrance Day” for the victim on May 31st, was a whopping $7,800. According to the City Council President, Bernard “Jack” Young, back on May 11th, he felt it was, “sad that we have to raise funds to bring someone to justice.” Sure sad, but not impossible? Councilman Jack Young raised over $330,000 in 2014 towards his campaign. At that same conference on May 11th, State Attorney Marilyn Mosby said, Baltimore “must do more”. I agree, especially knowing Mosby raised over $100,000 in just six months during her campaign. Mayor Rawlings-Blake missed the first press conference, but she nearly took the reins entirely on May 31st with tears in her eyes pleading for witnesses to come forward. Now, surely the $2 million Rawlings-Blake raised with the Democrat Party fundraiser, that recently dropped the Mayor, was no small task.

I do hope more funding appears on the reward check for McKenzie Elliott. I also hope Mayor Rawlings-Blake and her official buddies call up a few campaign sponsors to raise the bar. As of July 30, 2015 the reward stands at $8,000.