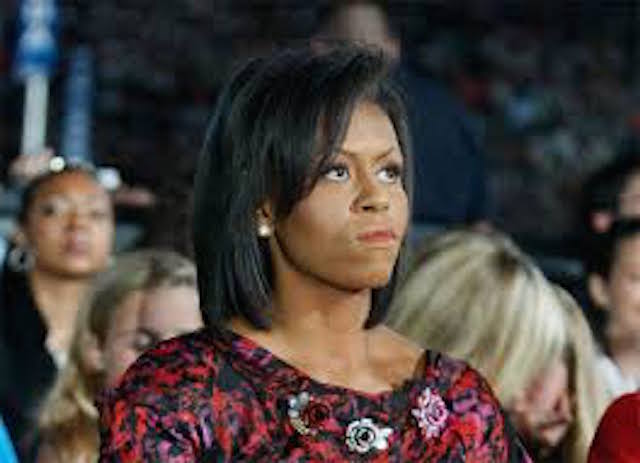 Recently I stumbled across some of our First Lady’s writing work from her college days at Princeton University. In my circle of Polysci colleagues I have been hearing of these racist rantings for years but have been too busy to research what with keeping up with President Obama’s fast track to Communism, his wife’s rampant, extravagant taxpayer-paid vacationing, and the greasy slug track left by Democrat shining star, Hillary Clinton.

Now, having read one of young Michelle Obama’s papers, her heartfelt words clarify the intentions and political motivation behind the face of our First Lady.  It also explains what drives her actions.

In 1985 Mrs. Obama was known as Michelle LaVaughn Robinson. While earning credits for her Bachelor’s degree, Miss. Robinson wrote a thesis called Princeton-Educated Blacks and the Black Community.

The entire paper is bulging with hate for the “Whiteness” Michelle perceived as a student at Princeton and, unfortunately for anyone born white, she has carried that hate with her all these years and brought it straight into the (ironically named) White House.

“Regardless of the circumstances under which I interact with Whites at Princeton, it often seems as if, to them, I will always be black first and a student second”.

These words from her youth are the exact sentiment that Michelle Obama projects today. Race is easily the only thing she sees.  Because our First Lady is so “color focused” the single issue of “Whites” and their perception of her black skin is the only paradigm she has. She views life through a black and white lens.

Throughout her thesis she kept referring to white people as Whites. What does that mean? I think I know because I can almost hear the nasty tone in her voice every time she typed the word. She continued with

“My experiences at Princeton have made me far more aware of my ‘blackness’ than ever before. I have found that at Princeton no matter how liberal and open minded some of my white professors and classmates try to be towards me, I sometimes feel like a visitor on campus; as if I really don’t belong.”

Perhaps she would have felt more included if she did not think others felt as she did. Michelle Obama is the master of projecting her own hate on those in the world around her near or far.

In her thesis, the future First Lady spoke ad naseum about her “blackness” and how it was magnified by attending a “predominately white, Ivy League, University.” She begrudgingly acknowledged that she, too, now had some higher goals in keeping with her ‘White contemporaries’ while studying at Princeton. Far be it from her to simply say that she had evolved as a person at Princeton and while that growth took place she fancied higher goals for herself. Unbeknownst to Michelle Obama, race is not applicable in all that effects life. In fact for some people, race is never an issue because they do not make it one.

As a result of her not-so-hidden race-focused beliefs, our First Lady today appears obnoxious and ungracious. For six plus years, she has given speeches about being slighted for her skin color, despite the fact that  she enjoys the vast comforts of our White House on Pennsylvania Avenue.  She goes to sleep every night with the Secret Service posted right outside her door and every wish and desire she can think of will be granted immediately–so whether she likes it or not, the ‘race card’ is no longer valid or necessary in the Obama household.  Does she even hear herself when she complains?  Where are Michelle’s handlers? Her Mother lives in the white House, too; why can’t she advise her daughter?

It is sad that Barack and Michelle Obama raised two lovely girls under such an umbrella of hate. The cycle will never be broken as long as people perpetuate their racist beliefs onto their children.  Babies are not born as bigots, they are raised as such and hate really does begin at home.  Last November, the First Lady reprimanded the American public, urging everyone to “censor our relatives around the Thanksgiving table to weed out any racists.”  She needs to take a good, long, hard, look in a big mirror. Liberals always take the blue ribbon in any situation for ‘Do as I say not as I do’.

The biggest lesson I have learned from all these years under the divisive Obama administration is that on the first Tuesday of November 2016, we absolutely must vote for one of the very good and bright Republican candidates to take back the White House because any degree of Conservatism is better than any type of Liberal.