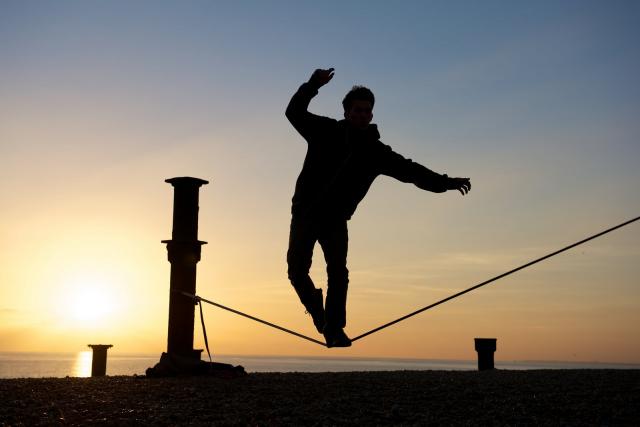 As the market engages in its first correction since 2011, some market watchers are saying that at least the US economy is healthy.

“I still think this pullback is a buying opportunity. I still have confidence in the U.S. economy,” said Scott Wren, senior global equity strategist at Wells Fargo Investment Institute according to CNN.

And that’s a nifty theory, even if not actually true.

According to the real-time forecast by the Atlanta Federal Reserve– one of the more accurate predictors of GDP– the economy isn’t growing very fast right now.

The Fed’s latest Nowcast of GDP has the economy growing at a 1.3 % annual rate. That’s up substantially from the 0.7% growth rate the Fed had forecast previously for the third quarter. But it’s nowhere near the historical baseline for growth in the United States.

The economy has many problems, most of which can be solved by asking this simple question: Will this policy help or hurt economic growth in the country?

Too often over the last six years the only question that’s been asked is: Will this policy help or hurt a special economic interest?

Because what’s more worrisome inside the GDP numbers is this disturbing trend: It has been only a few favored industries that have propelled the economy post-Great Recession. For example, in the latest upturn in the Atlanta Fed’s GDP forecast, much of it was due to added inventories in the auto sector. Without that bump, the numbers would look anemic still.

Out of the miasma rising from the policy swamp that now inundates over our national economy, there are two fundamental problems.

The first is that the growth we have witnessed has come out of industries like housing and autos and airplanes and healthcare that have seen unprecedented government intervention.

Go ask the Chinese how that works eventually.

The second is that growth overall is subpar…still

In fact, just about anything in our society that can be measured quantitatively or qualitatively is adversely affected by poor economic growth.

The Obama administration promised that they were fashioning an economy “built to last”. But we are six, weary years into an economic recovery that just recently put a stop to the extraordinary measures meant to bolster it. Interest rates are supposed to be going up, not down at this point. Inflation should be more pronounced. Employment should be creating rising wages and household income.

But none of this is happening.

And if the economy stumbles again? Interest rates under zero percent? More bond buying from the Federal Reserve? More extraordinary measures meant to muddle through until the next election?

There is scarcely a mistake committed prior to 2009– economically speaking– that has not been committed again and again by those who vowed to fix too big to fail– on both sides of the aisle.

So, instead of being an economy “built to last”, it’s an economy that’s going nowhere fast.

If we get to the other side safely we have two choices.

We can climb back out on that wire and cross again at peril; or we can climb down from the high-wire act permanently.

Guess which one we’ll pick.

Affordable Care? Not For This Doctor.

Too Much Technology In the Classroom!