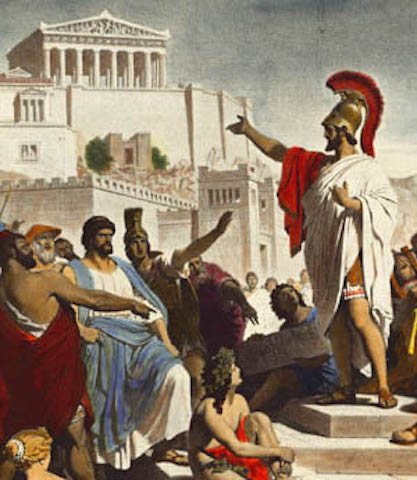 Today, the American Dream is unfortunately only guaranteed to those born into primogeniture and entail. Man is never biologically born entitled to prosperity, and if we were, we should not like it, for it would eradicate the individual’s humanity, yielding a state of entropy. As man is innately corrupt, the inalienable rights to life, liberty and the pursuit of happiness are only assured by the impartial mediation of a mutually-legitimized third party. If happiness entails owning property or shares, liberty must not be constrained by a prohibitive caste system. Men are born free of preconceptions (“tabula rasa”), yet spectacularly possess the natural instinct ubi terra patria est (“where there is bread, there is my country”). Therefore America, sired by yeoman farmers, poets and sailors, was a New World settled by refugees where only God’s westerly winds permitted they may sail. America, then, was Liberty’s door to opportunity upon which her once-wayward sons could freely knock.

The rise of large cities yielded corrupt harvests under socialism’s permafrost, killing the seeds of virtue from which talent naturally germinates. All this transpired through unnatural political coercion — and by taxation, which defined, is legalized theft.

“I think our governments will remain virtuous for many centuries; as long as they are chiefly agricultural; and this will be as long as there shall be vacant lands in any part of America. When they get piled upon one another in large cities, as in Europe, they will become corrupt as in Europe.”― Jefferson to James Madison, December 20, 1787, in PTJ, 12:442.

In an October 28, 1813 reply to John Adams, Thomas Jefferson extolled a natural aristocracy over an artificial nobility, the conscientious arbiter balancing justice with liberty. A virtuous people, armed and educated, would best preserve the rule of law as the popularly-equipped check against their own government:

I think that to give [citizens] power in order to prevent them from doing mischief, is arming them for it, and increasing instead of remedying the evil. For if the coordinate branches can arrest their action, so may they that of the coordinates. Mischief may be done negatively as well as positively.

Jeffersonian too advocated federalism under a democratized republican form of governance.

It was a Bill… to divide every county into wards of 5 or 6 miles square, like your townships; to establish in each ward a free school for reading, writing and common arithmetic; to provide for the annual selection of the best subjects from these schools who might recieve at the public expence a higher degree of education at a district school; and from these district schools to select a certain number of the most promising subjects to be completed at an University, where all the useful sciences should be taught. Worth and genius would thus have been sought out from every condition of life… My proposition had for a further object to impart to these wards those portions of self-government for which they are best qualified, by confiding to them the care of their poor, their roads, police, elections, the nomination of jurors, administration of justice in small cases, elementary exercises of militia… with a Warden at the head of each.

We may attribute American liberty to Jefferson’s greatest influence, John Locke. As no two people are equal aside their eyes watching God, a social contract must devolve federal America into the smallest possible culturally-homogenous polis’ akin to what pervaded in ancient Greece.

The law for religious freedom, which made a part of this system, having put down the aristocracy of the clergy, and restored to the citizen the freedom of the mind, and those of entails and descents nurturing an equality of condition among them, this on Education would have raised the mass of the people to the high ground of moral respectability necessary to their own safety, and to orderly government.

America was established by settlers who constructed small townships, with town halls and churches in line with the archetypical Athenian polis. What we understand is unique about New York City would not apply for the Iowa farmer, so different are both states, respective cities, economies of scale and cultural dynamics. And conservatism places its highest premium upon the cultural narrative, avoiding ethical violations of local security leading to public instability.

Dr. Peter Critchley credited both Pericles — a traditional aristocrat — and the son of a wealthy arms manufacturer named Sophocles with constructing the model for the earliest form of popular democracy. Both understood its virtues and vices — too much popular power will deteriorate into anarchy. Pericles, for example, sought a reconciliation for “the various elements of freedom, public and private, with each other for the greater good.” Thus public and private freedoms still today remain the clashing forces narrating the struggle to balance human behavior with natural law. These are consistent with Isaac Newton’s third law of energy and conservation. (“With every action, there is an equal and opposite reaction.”) And both define the eternal struggle between the political Left and Right.

Pericles declared as his first element for a free democracy the necessity of a constitution, or social contract, from which a general consensus would agree and abide by:

“Our constitution is called a democracy because power is in the hands not of the minority, but of the whole people. When it is a question of settling private disputes, everyone is equal before the law; when it is a question of putting one person before another in positions of public responsibility, what counts is not a membership of a particular class, but the actual ability of which the man possesses. No one, so long as he has it in him to be of service to the state, is kept in political obscurity because of poverty.”

“And just as our public life is free and open, so is our day-to-day life in our relations with the other. We do not get into a state with our next door neighbour if he enjoys himself in his own way, nor do we give him the kind of black looks which, though they do no real harm, still do hurt people’s feelings.”

The foundation for a civil democracy, claimed Thucydides, was “… each single one of our citizens, in all the manifold aspects, is able to show himself the rightful lord and owner of his own person [e.g. “self-sufficient”]….” A functioning democracy cannot survive by forcing men to be free as Jean-Jacques Rousseau advocated in The Social Contract. Socialism violates this right to self-ownership, regulating the body God provided each individual. However, the individual has no right trespassing on another’s shares or health.

Austrian economist Murray Rothbard, the intellectual giant of libertarianism and its key plank Anarcho-Capitalism, opposed the state “because it has its very being in such aggression, namely, the expropriation of private property through taxation, the coercive exclusion of other providers of defense service from its territory, and all of the other depredations and coercions that are built upon these twin foci of invasions of individual rights.” And while Rothbard rightly asserted “Rights may be universal”, the critical — and correct — connection must ensure“their enforcement must be local.” Hence, Locke’s concept government only exists to settle disputes over private property remain the best hope of a world with the least popular coercion, the most minimalized possible distortion of natural law. Such are the differences between liberty and justice, for according to John Locke, justice must preserve liberty, but never deny it.

Athenian democracies under conservative principles can only manifest if its appointed officials “meet danger ‘voluntarily, with an easy mind, instead of with laborious training, with natural instead of with state-induced courage.” Courage, then, must be restored before the American people may pledge their lives, fortunes and sacred honor to restore the republic.

Have Republicans Gone the Way of the Whigs?