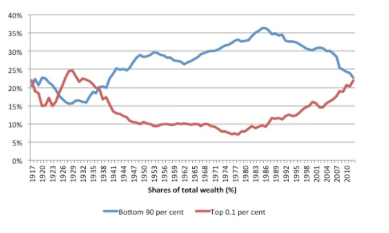 Since 1964, Democrats have waged a war on poverty, yielding no fruit other than the spoiled variety. Poverty is at a fifty year high, and the middle class, near extinction. The middle class is today rated only twenty-seventh wealthiest globally after decades as the richest. Yet amid the socialists’ zeal to declare the rich must become less, they are wealthier than ever. For instance the following statistics correlate the income tax and the Federal Reserve to income inequality, where the bottom ninety percent of wage earners will be controlled entirely by their rich masters. 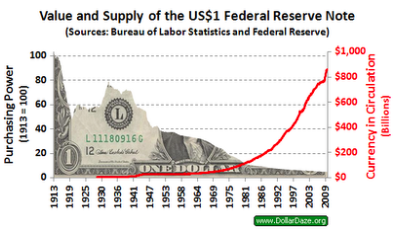 Rising income inequality is traced to 1970 when Richard Nixon ended the Bretton Woods Gold Standard exchange according to the Mises Institute. Due to Lyndon Johnson’s “Great Society” policies (the war on poverty and Vietnam conflict), the dollar grew too overvalued for standard gold to anchor the monetary supply’s weights and measures. Nixon subsequently created an avenue for the free flow of fiat currency, as it “ushered in a period of unanchored central bank credit creation, and government deficit spending.” 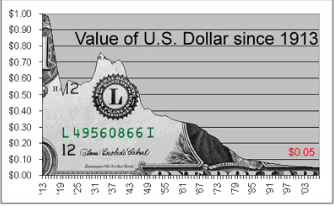 The Washington Times reported September 4, 2014 the Survey for Consumer Finances corroborated pro-gold standard enthusiasts claims. Furthermore, the following figures conclude economic success is measured by Democrats in how many are placed on welfare as the middle class disappears.

President Obama’s two immediate predecessors — Bill Clinton and George W. Bush — were able to sing different tunes. In the case of Clinton, such is quite to the contrary, even as it was a lie when declared all levels of income increased “for the first time in decades”. Bush declared “some policies lift people up” while others “tear others down”. Yet neither employed the long-discredited Keynesian economic policies until Obama rammed through his $800 billion stimulus package while signing into law the Affordable Care Act in January 2010.  Federal debt is over $18 trillion while the dollar is deflated to -0.1 percent. Still, the GOP’s pen drops…. 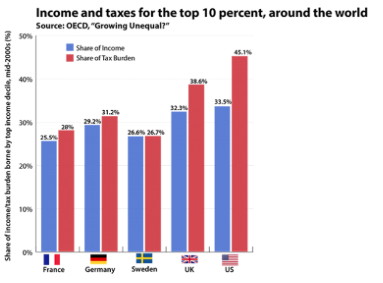 The dollar’s value is debased to where less pays a minute fraction of one unit of measure in debt, still accumulating presently at 0.25 percent. Federal Reserve chairwoman Janet Yellen is soon to increase interest rates while the labor force accelerates its decline and debt rises at an asynchronous rate. Debt may soar at a rate never before witnessed both in real terms and interest rates, while the dollar could hyperinflate. It may yield a condition akin to Japan, Spain and Greece, each of which are fending off 200 percent debt-to-GDP ratios.

The value of the dollar is worth just $0.05 what it was prior to the income tax (1913). Just three years later, the Federal Reserve was created. America’s political machine convinced the public the rich grow wealthier at a rate far accelerating the bottom ten percent. They were forced to be “free” by handing over their property through direct taxation, discouraging thrift. Finally, informing the general public they will be well-provided for while their wages will not be heavily taxed never transpired — in fact, incomes grew more stagnant, far less in total value with relationship to increased price indices and hidden inflation as bottom rates inflated at each minimum wage hike. Payrolls were slashed, work hours cut and stores closed while the poor continually are bumped into a higher tax rate bracket, paying more while keeping far less of their earnings. 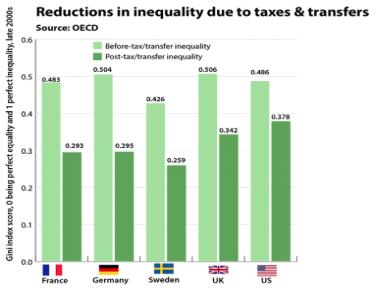 Alterations in inflation contributed to the enormous decline in the value of the dollar over the past century. At best, $10 billion is equivalent to paying down a unit of debt equal to $800 billion due to damaging monetarism by the Federal Reserve debasing the coinage. While debt never deflates, the currency continually is debased. Central banking, indeed, is far more pernicious to the economic well-being of any nation — America included — than the most repressive tax codes for wage earners. Debt increases asynchronously to the purchasing power of one’s income. As government confiscates more of the people’s income, the less their remaining earnings will purchase, leading to more poverty. Throughout this period, business and capital gains taxes have not been cut since the Reagan years. America is now the third-least competitive among developed nations due to repressive regulations, while the nation, according to Dylan Matthews, pays the most progressive figure in income taxes. Still, growing income inequality in America persists compared to Europe.

Yet President Obama is as tone-deaf with respect to income inequality and rising poverty. His rhetoric from his 2012 State of the Union Address demonstrates how out of touch he is with Main Street, U.S.A. when his policies benefitting Wall Street are contrarian to his disdain for the industrious:

“The defining issue of our time is how to keep that promise alive. No challenge is more urgent. No debate is more important. We can either settle for a country where a shrinking number of people do really well, while a growing number of Americans barely get by, or we can restore an economy where everyone gets a fair shot, and  everyone does their fair share, and everyone plays by the same set of rules.”

The Fed receives its data from the IRS, which only measures the flow of funds domestically. And this is where free trade agreements fall on deaf ears for both statists and advocates of this unintrusive nature of economic trends and growth transnationally.

Given the enduring hard times, you might think that corporations have used up their cash since 2009. But real pretax corporate profits have soared, from less than $1.5 trillion in 2009 to $1.9 trillion in 2010 and almost $2 trillion in 2011, data from the federal Bureau of Economic Analysis shows.

That is nearly $1 trillion of increased profits over two years, while actual taxes paid rose less than a tenth as much, BEA reports show. Dividends, wages and capital expenditures all grew less than profits, while undistributed profits rose. The result: more cash.

Taxation is in itself, state-sanctioned theft. Tax exemptions and bailouts following the global financial market crash of 2008 led to an equally-insidious ploy by corporate moguls to engage in business mergers and acquisitions. Relaxing taxation levels while employing the Teddy Roosevelt strategy of trust busting (which Ronald Reagan also applied such as in his administration’s break-up of the AT&T monopoly leading to the telecommunications and tech booms through the Internet during the 1990’s) will maintain American jobs at home while simultaneously granting greater access to entrepreneurship for prospective small business owners, discouraging corporate and capital flight to nations with cheaper labor in contrast to the disastrous Clinton-era NAFTA folly. The Telegraph reported August 2014 the U.S. has the highest corporate tax rate in the world.

Cash hoarding exemptions continue to worsen, never more so than under Obama, having presided over an Wall Street serving as his casino economics policy. As greater, more deregulated exemptions lead to repurchasing stock options such as with the Alibaba Trojan horse from China, purely domestic firms are discriminated against and during times of economic distress, jobs lost.

David Cay Johnston made an excellent observation. Multinational corporations pledge to return to America what it robbed. They pledge to return some $1 trillion should Congress provide them an 85 percent tax discount. Yet all it yields are more casino economic policies, most especially under liberal policies as corporate raiders are overwhelmingly supportive of Democrats — and after all, none other than George Soros crashed the Bank of England September 16, 1992 (“Black Wednesday”). Unless an aggressive antitrust policy is strategically implemented, too much of a good thing is really not good at all.