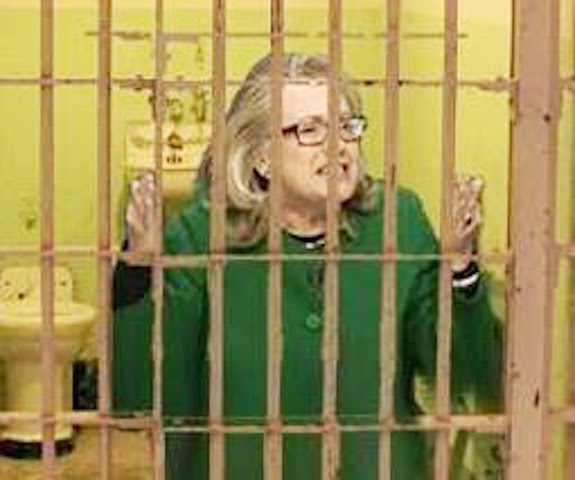 BREAKING ADVICE FOR INMATE # 08714107 and everyone around her, including the Leaders of the Clinton Foundation.

YOU NOW HAVE THREE (3) VIABLE CHOICES:

1.  Put ‘SEX TAPES’ and other ‘Ground Breaking Scandal News’ of key GOP/OGA Officials on the Server and thumb drive that Hillary turns in to the FBI after “washing” it.  (Yes, I thought of that one….that is how far out-of-the-box my thoughts roam sometimes, especially with a glass of Cuban Rum.)  Oh–and pray to God that the sentence for “tampering with evidence” is much less than that of which you are really guilty of.

2.  REPLACE all the drives with sterile copies.  The investigators waited way too long.  A kid could pull this basic “sting” off — it isn’t high-tech to do so.

QUESTION:  Would this not be “tampering with evidence”?  If so, how would she get out of that? Isn’t this just digging a deeper hole?

ANSWER:  You have to prove it. Many computer experts can COPY a drive without certain files on it (cleaned/sterilized) so that it looks like the original, or that its just missing a lot of stuff.

Retaining all the timestamps is trivial.  If what they are looking for isn’t there, they must prove that it was at some point.  You don’t get to Clinton power status (AKA “above the law”) without knowing how to cover your tracks.  It will take very skilled GOP folks if anything Leavenworth-useful comes out of this.

Best advice, go to the VA computer experts; they know how to change, conceal, screw up or lose anything.  (Humor is always based on truth…)  If they want the missing emails, they need to search for the recipients of them and anyone who could have been CC:d on them. Finding the received emails is just as incriminating and they are generally spread over a wider range of systems due to multiple recipients.

(NOTE: Hopefully, they’ll look at the ‘manufacturing date code’ on the server drives. THEY WILL PROBABLY BE NEW!)

(***** PLEASE LET ME SAY THAT AGAIN:  Hopefully, they’ll look at the ‘Manufacturing Date Code’ on the server drives. THEY WILL PROBABLY BE NEW!)

Just sayin’.  All us redneck, “Confederate”, Bluegrass/Country picking’ SOB’s from the heartland of Arkansas call it as we see it.

James Pollock is 1/8 Cherokee, a Family Physician, and an 8/8 War Veteran. He joined the U.S. Air Force after 9/11 (2 deployments to Iraq) then transitioned back to civilian life. He says his time as an AD critical care doc, Special Ops doc and USAF Instructor was special and he is proud to have serve as the first US Family Physician in the history of the USAF (possibly US Military) to fully manage a combat, trauma ICU (AFTH in Balad, Iraq). Dr. Pollock built a practice from scratch in Florida before going into the USAF.

When The Internet Trolls Hillary