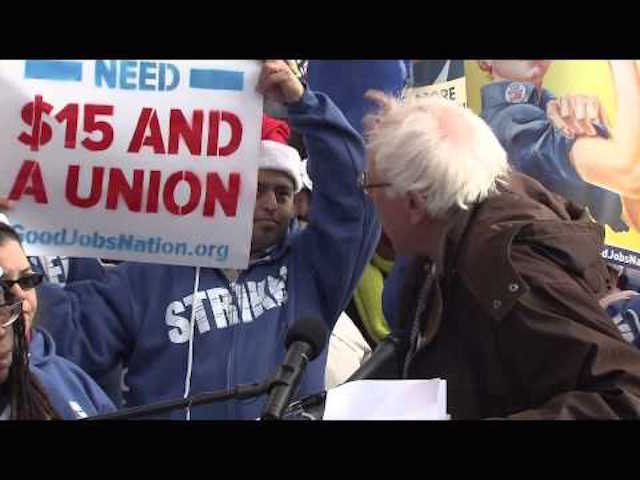 The President justified his decision by stating: “We are a nation that believes in rewarding honest work with honest wages.” Sanders’ rationale is similar: “The current federal minimum wage is a starvation wage. It’s got to be raised to a living wage.”

They clearly believe it is government’s job to correct economic inequalities. Under Socialism the government owns and controls production. Given that the vast majority of Federal contractor earnings come from government, the order basically imposed controls on production.

Promising voters a raise is an easy way to get votes. Who doesn’t want to make more money? It sounds good, but in reality there is no guarantee raising the minimum wage will help.

A simple accounting example can explain:

Suppose there are 6 businesses associated with a person. Assume they are employed by one business (Company A) and patronize 5 businesses as a consumer. For simplicity sake, assume there are no payroll taxes and that all businesses in question aren’t seasonal.

If one’s employer is currently paying the $7.25 per hour minimum wage, and that person works 40 hours a week, raising the minimum wage to $10.10 per hour sounds very appealing.Their gross wages increase from $290 to $404 a week. It’s a huge raise if their bills consist of the following:

In this example the person in question has only $5 to spare each week. Therefore, increasing their wages to $404 a week will leave them with an extra $119 a week. Maybe, maybe not.

For argument’s sake assume the wage increase does not lead to any unemployment.

How is the employer effected? Company A is a manufacturing company that produces jackets and sells them directly to customers. All business activity associated with Company A takes place in one building. Every month, 200 jackets are produced and sold. Company A’s net income is $10,000 per month.

If Company A is faced with higher costs, they will compensate to keep net income the same. They have 2 choices : 1) Reduce workforce or 2) Increase the price of their product. Since workforce isn’t reduced, option 2 is selected.

Company A has the following monthly financial structure before the wage increase:

After the minimum wage increase, the new costs for Company A are:

It’s easy to understand why hourly wages increased. It is directly attributable to the minimum wage increase. So why did other costs increase? If every business effected has to pay higher hourly wages and doesn’t reduce workforce, then prices for materials and services increase as well as every business tries to compensate for the extra wage expense. In cases where it takes 3 or more businesses to bring a product to market there is a multiplicative effect. Some businesses will have to increase prices more than other businesses. The more labor-intensive a business, the more it’s hourly wages will increase.

At Company A, employees now make $1,616 per month (as opposed to the $1,160 per month they were making). Company A’s increased expenses is of no concern to the employee. They don’t buy jackets.

The actual impact a minimum wage hike may have on an individual is hard to assess. The real question isn’t a matter of dollars earned as much as it is the buying power of the dollars earned. The impact can vary dramatically from region to region. In a worst-case scenario, the following could conceivably happen in regards to an individual’s monthly expenses:

In this hypothetical, the employee actually ends up with $4 to spare as opposed to the $5 extra before the minimum wage increase. While their salary increases dramatically, so did their bills, which in effect neutralized the raise.

Seven Nobel laureates from the American Economic Association signed a letter in January 2014 in support of raising the minimum wage to $10.10 per hour. Large macro-economic models are very complex and difficult to design. It’s highly unlikely any two models will produce the same results. The example presented here is a simple model only intended to show what could happen given a few simple variables. It is meant to show a scenario in which workers don’t benefit.

None of the Nobel laureates who signed the letter in support of increasing the minimum wage to $10.10 per signed off on Sanders’ proposal to increase it to $15 per hour. Given the enormity such an increase represents, it would be difficult to design an accurate model to project its impact. Refusal to sign off on such an increase is a pretty good indication there are concerns about the $15 per hour proposal.

To the Democrats, our capitalist system is broken. Their presumption is that employers will always pay employees as little as possible. That isn’t always the case. From a business perspective, it makes sense to pay productive employees more than non-productive employees. It also makes sense to pay valuable employees a salary that will keep them from leaving their current job. Training costs for new employees, as well as lost efficiency from turnover is a bad thing. There is no ‘free ride’ in business. Government can force an employer to pay higher wages, but currently it can’t dictate how an employer will respond to additional costs. If a business is earning a certain level of income, what right does the government have to deem it too high?

Over time, a free capitalist society is far better suited to providing a better lifestyle and more innovations than a socialist system. Can anyone name a business run by the government that earns more net revenue, achieves greater efficiency and develops more innovations than private enterprise? Socialism and communism do not work. Governments are not better suited to run businesses than capitalist private citizens.

Socialist ideals do not work in a capitalist society. In the Company A example, it should be noted that hourly employees went from earning $1,160 a month to $1,616 per month. At the same time, the two managers’ salaries remained at $1,700. How will the managers feel? They will likely resent the fact that they now only earn slightly more pay than the people they manage. They will also resent the inherent unfairness of seeing some workers awarded with a huge salary increase while their pay remains the same. Compounding the problem is the fact that the minimum wage increase, which doesn’t benefit them, will nevertheless cause their cost of living to increase. It effects morale and productivity. An excellent case study is the CEO of a credit card processing firm in Seattle who self-imposed a $70,000 ‘minimum salary’ at his company. His intent was to address a ‘wealth gap.’ Any person who has any business knowledge could have told him that his policy made absolutely no logical sense. If an employer wants to take care of their employees voluntarily there is nothing wrong with that. It can inspire loyalty and commitment. However, implementing a blanket policy such as a ‘minimum salary’ will only cause resentment, turnover, poor efficiency and low customer satisfaction. Not surprisingly, the CEO who implemented the policy is currently facing a downturn in business, legal issues, and is even having to rent out his house.

Politicians are usually lawyers by profession. That isn’t meant as a disparaging remark. Unfortunately, a law degree does not equate to a deep understanding of economic issues. Some believe that raising the minimum wage will instantaneously correct injustices in society and ensure everyone is paid properly, if not paid the same. The question all of us must ask is this: When raising the minimum wage fails to produce all the intended results, what will come next?

Will the government institute price controls to ensure that additional wages are not offset by increased prices? If so, does that set our Nation on a path towards communism? It cannot be stressed enough that while imperfect, a capitalist society provides more liberty. Do we really want to see the government set a course towards communist/socialist ideals? Did the U.S. win the Cold War only to voluntarily adopt the same philosophies as those we opposed for so long?