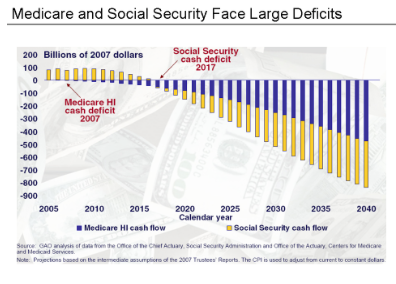 Thomas Jefferson feared 224 years ago a national bank would cause the death of constitutional law through marvelous excuses to enforce taxation:

At present, Social Security and Medicare will be bankrupt in 2034. David Stockman recently authored in an editorial for Newsmax the farcical dilemma retirees of post-baby boom generations face. As such, let us consider the following:

Of course, the American electorate has D.C. listening so well, its present leadership — Speaker Boehner and Senate Majority Leader Mitch McConnell — colludes with President Obama to increase socialism to the fullest extent of government’s power. Yet there is that third contingent personified by John T. Harvey of Forbes of this as a logical impossibility. Except, of course, he himself is intellectually-limp, for his claim (below) never treads water when involving the taxpayers’ incomes.

It is a logical impossibility for Social Security to go bankrupt. We can voluntarily choose to suspend or eliminate the program, but it could never fail because it “ran out of money.” This belief is the result of a common error: conceptualizing Social Security from the micro (individual) rather than the macro (economy-wide) perspective. It’s not a pension fund into which you put your money when you are young and from which you draw when you are old. It’s an immediate transfer from workers today to retirees today. That’s what it has always been and that’s what it has to be–there is no other possible way for it to work.

Mr. Harvey understands precious little about socialism, how governments run out of taxpayer money. The money may be there, but who allocates what, and who pays for public expenditures running massive deficits in specified budgets? Yes, the money is there, but the dollar in 2013 figures was worth just $0.05 to the same banknote from 1916 when the Federal Reserve was established. Al Gore claimed he intended to create a “lock box” for all Social Security funds to be placed. The trouble is, America continues to run massive debts due to monetarism debasing the coinage. Interest rates count greatly towards what the nation pays in total. And if fewer Americans are in the workforce, individuals having given up looking for work due to a barren job market will find it impossible to contribute to the nation’s tax revenue. The Federal Reserve may print paper money with total impunity, but trees stop producing paper once the supply of bark is fully shaved. The tax burden for all incomes naturally increases due to inflation, resulting in fiscal redundancy and the death of civil society.

For Mr. Stockman the realist, the facts are incontrovertible. Because somewhere within the incalculable trillions in fiat cash lie the fundamental truth some program, somewhere and somehow, will run dry of money. But let us be more realistic, too: all that money is pooled into the same bottomless cauldron, still leading to increased taxation and more lavish public expenditures, still bouncing the nation’s checkbook like bouncers at night clubs.

The truth is there. It does not matter there will somewhere be money officially declared in the federal government’s piggy bank based on quantitative easing alone. The Federal Reserve dictates all monetary policy, as it is not a fully-regulated federal bureaucracy. After all, Harvey never addressed how the dollar will be further debased tomorrow, creating a disproportionate trend of natural inflation once the dollar barely pays for one unit of cost attributed to the still-increasing interest on the deficit. Stockman, however, did, in describing the estimated $1.2 trillion in compounded interest. Unless indexing for inflation is employed on debt payments, the problem will continue to metastasize.

José Piñera, co-chairman of Cato’s Project on Social Security Choice and Pension Reform, was formerly Chile’s Secretary of Labor. Under Piñera’s stewardship, labor laws were introduced designed to provide flexibility to the marketplace and, as Secretary of Mining, the constitutional law establishing private property rights in Chilean mines. In December 1997, he authored a piece for Investor’s Business Daily how “pay-as-you-go” social security systems destroy the link between contributions and benefits, effort and reward. He asserted correctly, “Everyone tries to minimize what he puts into the system while trying to maximize through political pressure what he can get out of it. That’s why pay-as-you-go plans are going bankrupt all over the world.” And indeed for Democrats, Social Security and Medicare (and now, to the party’s own demise, Obamacare) were created for matters of political leverage, not general benefit.

Much like I advocated for years, Piñera rewrote the policy to permit “every worker to choose whether to stay in the state-run, pay-as-you-go social security system or to put the whole payroll tax into an individual retirement account.” For the first time in history, a nation’s labor force had a choice how they intended to benefit off retirement pensions or social security: based on compound interest, which he labeled one of the two most powerful forces on earth.

In providing this choice, approximately 93 percent of Chilean workers chose the privatized model of social security pension plans. In trusting the private sector’s stewardship over the risk/reward model at their controls rather than politicizing the highlight of their twilight years, Chile’s financial system was fully run by 15 private corporations in competition among themselves for business.

If you invest money in the market, it could go up or down. Over a 40-year period, though, a diversified portfolio will have very low risk and provide a positive rate of real return. But when the government runs the pension system, it can slash benefits at any time.

The elderly were guaranteed benefits under the old system. Those joining the labor force for first time were required to enter into the new privatized model. The latter is in my estimation, an unfortunate act of coercion.

To his credit in 1997, Chileans were taught to be good capitalists. Each citizen’s money was invested in the stock market. And as he asserted, “if government tomorrow were to create the conditions for inflation, they would be damaged because some of the money is also invested in bonds — around 60%. So the whole working population of Chile has a vested interest in sound economic policies and a pro-market, pro-private-enterprise environment.”

The lone flaw in Piñera’s policy arrived in the form of the 2008 financial market crash, resulting in banks filing for bankruptcy and an unprecedented number of mergers resulting in today’s trouble of corporate socialism. How best this might be remedied is only possible by reestablishing the gold standard for currency weights and measures akin to the Bretton Woods exchanges. An aggressive measure to curb the rising tide of mergers must again be revisited. This has resulted in four U.S. banks owning some two-thirds of Ukraine’s national debt. Yet in lieu of the recent Trans-Pacific Partnership, the pending-Transatlantic Trade Investment Partnership and big pharmaceuticals profiteering more than ever off socialized medicine, a painful retrajectory of America’s focus on collectivization to optional privatization would be well-worth the initial trouble to establish the desired end, given it would result in a big bang period of economic growth if only central banking and interest rates were fully-deregulated.

Socialists still scream people are not receiving due benefits due to not having worked enough. And why would they not, given that was the point to encourage people to get up, get a job and actually work for a living, not siphoning off taxpayers?

“Most people perceive the costs of pensions and the pensions themselves as unfair,” said Patricio Navia, a political science professor at New York University and at Diego Portales University here. “Many of those who started work when the system was first adopted are realizing that they have not been able to contribute enough to get a significant pension,” … they resent “overhead costs that are so high” and that have led to record profits for the pension funds that manage contributions automatically deducted from workers’ paychecks. …

“There are two big issues, coverage and costs,” Andrés Velasco, Ms. [Michelle] Bachelet’s economic adviser, said … “Too many people are outside the system,” he said, adding that too many of those in the system have found that “saving via the pension funds is quite expensive.”

Apparently for Mr. Harvey, there must only be available money for workers’ pensions when there isn’t… or is there really, if Washington states to the contrary either “yay or nay”? Political ambiguity cries foul when expedience is suddenly too opaque for the deaf, dumb and blind socialist gnats hitting the windshield.

Guest Writer Zack Zanardi: My Autism (Or How I Learned To Be Me)

Hillary Admits She’d Rule Without the Consent of the Governed